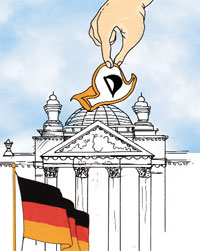 Which is the fastest growing political party in Europe? The surprise answer is Piratenpartei or the German Pirate Party, which is fast eclipsing the Green Party and the Left in Merkel country. Last month, the German Pirates took an impressive eight to 12 per cent of the votes in several states—the country is a federation of 16 states—and 45 seats in the regional parliaments (of a total of 1,890 seats), stunning Chancellor Angela Merkel’s ruling Christian Democratic bloc. This is the biggest breakthrough in conventional politics for a group that subscribes to unconventional principles. Since 2006 when the first such political party, Piratpartiet, was formed in Sweden, pirate parties have come up in Austria, Denmark, Finland, Germany, the Netherlands, Poland, and Spain, all of these affiliated to Pirate Parties International. The Swedes made their mark in 2009 when they garnered 7.13 per cent of the votes and became eligible to send two of their Pirates to the European Parliament although they were unable to make a mark in domestic politics.

But the power of digital democracy has been growing in leaps and bounds since then, specially when piracy is the issue. In February this year, hundreds of thousands of people poured out into the icy streets of Europe to rally against ACTA, or the Anti-Counterfeiting Trade Agreement, aimed at stopping piracy and counterfeiting and having serious implications for Net freedom.

The May elections in Germany have made it clear that the movement against unbalanced intellectual property rights (IPRs) is finding resonance with voters, allowing the pirate brig to come ashore, its flag flying high in mainstream politics. The breakthrough occurred in September 2011 when the Pirates took nearly nine per cent of the vote and 15 seats in the Berlin parliament. It is hard to believe that such a simple plank—an aversion to strong copyright laws combined with a passion for keeping the Net free of government control—can charm voters and win seats. But patently, these are compelling arguments.

Pirates stand for copyright reforms that will free cultural works for non-commercial use, radical overhaul of the patent system and right to privacy for Net users. They also seek transparent governance that will allow people access to public records. On patents, some take extreme positions: patents should be abolished (gradually) because the current system has resulted in privatised monopolies which “are one of society’s worst enemies”. All this finds resonance with societies in which the Net has become the public square of discourse and policy.

As a result, there is direct correlation between government crackdowns on online copyright violations and the popularity of pirate parties. For instance, the Swedish party did not get any traction until the police raided a facility hosting Pirate Bay, a file-sharing site in 2006. Then when the verdict was announced in 2009—the three founders of Pirate Bay were jailed for a year and fined—membership of the Pirates grew exponentially, making it the third largest party in Sweden. In Germany, too, the rise of the political buccaneers has paralleled increasingly stringent action on online copyright violators, basically file-sharing sites. And the political system is such that any party, even buccaneers, can become a force once it garners enough votes.

After it took one per cent in the European elections and two per cent in the federal elections in 2009, Piratenpartei became eligible for state funding which is pretty substantial. This enabled the Pirates to acquire the trappings of established political entities—billboards, posters and banners that spread the party message. That message or philosophy is based around what the Pirates describe as “liquid democracy”, a system that allows everyone to make suggestions, have a say and a vote on issues and policies through online forums which use the party’s Liquid Feedback software.

But while this is a radical innovation that allows true democracy and eliminates hierarchies through the online forums known as Pirate Pads, it also results in chaos and delay in formulating party position on a range of issue.

Besides, Pirates may find themselves in deep waters politically. The German party may have widened its agenda more than its Swedish counterparts have done but this may not be enough to win it votes in the general election to the Bundestag in 2013. That is something the anti- IPR movement will need to grapple as it sets sights on capturing more legislatures across Europe.

The German Green Party, which has received a sock on the jaw from the Pirates, complains the upstarts do not have a coherent position on the burning issues of the day: the embattled Euro, economic crisis and social upheavals. That may be the loser’s plaint but not without truth. Liquid democracy is an appealing new facet of democracy but hardly the ideal way of finding solutions to the hard realities of life. Unless, of course, one believes that answers can be found in algorithms.