The polluters say they will not pay 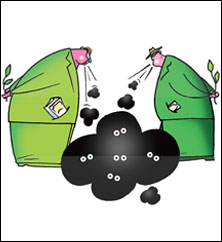 We know what the conference was supposed to agree upon: drastic emission reduction targets by industrialized countries and actions supported by finance and technology by emerging countries such as India.

After two years of intense negotiations and heightened concerns related to the growing impacts of climate change, the world was supposed to be ready to sign a deal to save the planet. That didn’t happen. Worse, the world showed it was ready for a slugfest, with top leaders participating in dirty, deceitful and underhand moves to get an accord which was neither effective nor fair.

They stooped low, but did not conquer, because the rest of the world showed them might was not right.

This is the underbelly of Copenhagen we must understand. It is apparent the rich world has taken off its gloves —no more sweet-talk about being part of the solution to cut emissions. They want their continuing right to pollute. At all cost.

Let’s do a replay. The conference had two tracks to negotiate. The first concerned the continuation of the Kyoto Protocol, where targets had to be set for emission reduction by industrialized countries. For the past two years, developing country negotiators struggled to get discussions on these matters off the ground. But progress was painfully slow.

The Annex 1 countries (the ones that had to agree to targets) refused to put on the table how much they would reduce. They also refused to agree to set a baseline for emission reduction—choosing any year most convenient to them, so setting weak and meaningless targets. All this in a context where the science was certain: cut at least 40 per cent over 1990 levels by 2020.

The second track was negotiation under the Long term Cooperative Action (lca) to agree upon the following. One, the targets for developed countries, including countries such as the US, which does not accept the Kyoto process. Two, to agree on how those mitigation actions the developing countries take, that are funded and supported through technology, will be measured, reported and verified.

Three, an agreement on how to pay for reduced deforestation, and addition of carbon sinks (afforestation), in the developing world. Four, an agreement on adaptation, to see how the poorest of the world, already impacted, will be supported to cope better. And five, agreements on finance and technology. This was the framework of the global cooperative pact to build climate change strategies for the coming years. But these negotiations, too, were stuck. It is now evident why: some countries had other plans.

As the conference opened in Copenhagen, a different game emerged. A group of countries—led by the US and Australia and assisted by the host government of Denmark—had every intention to subvert the ongoing process and to replace the agreements with a framework of their own. In the very first week, even as negotiators struggled to find consensus on issues in the meeting rooms, the UK daily Guardian leaked that the Danish government had a ‘paper’ ready to spring on the countries, from outside the process. 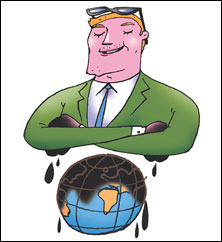 This paper contained the elements of the new coalition of the willing (see ‘2nd coalition of the willing: bad for climate and for us’, Down To Earth, November 1-15, 2009). It proposed weak targets for the rich countries, changed the global, legally binding nature of the pact to a voluntary strategy based on domestic actions and rejected all principles of equity. As news broke of this ‘Danish proposal’ the hosts played dumb. The proposal went underground.

But the proposal had powerful backers. A White House press note, released a few weeks before the conference began, had announced President Barack Obama would be making his way to Copenhagen and mentioned there was “consensus on the Danish proposal”. So who was lying?

On Monday (December 14), in the second week of the conference, the African group, fed up with the intransigence, walked out. They wanted discussion on the Kyoto Protocol targets agreed upon. They wanted a deal that was effective. The shock treatment actions provoked some response. At least, so everyone thought.

For, behind the scenes, the endgame was being readied. Inside the negotiating rooms, discussions were deliberately blocked. The clock was ticking to Friday (December 18), when leaders, including Obama, were expected to sign an agreement. But no agreement was ready.

What was happening? This was being asked and not answered. On record, the Danish presidency said they did not have an agreement, ready to be sneaked in at the last minute. They said they were transparent in their dealings.

On Wednesday, the next act of the underhand game played out. The Danish presidency did a flop act. Suddenly in the plenary, environment minister Troels Lund Poulsen announced the presidency had drafts for two agreements, which they would give ‘shortly’. Sitting in the plenary, I could see the obvious shock.

But as China, India and others responded saying this was unacceptable, the world media moved in. The developing countries were now seen as ‘blocking’ the deal. They were the bad guys.

The game played on. The Danes, faced with opposition from most countries, once again withdrew. They now said they did not have a draft agreement ready. Negotiations continued in rooms. The leaders arrived. The speeches began. It was now Thursday night. In a few hours, the agreement had to be signed. What agreement? What would be signed?

Sitting in the corridors that night, I heard the buzz grow. Now, it was said, there was indeed a draft agreement the British government had prepared, which would be given to world leaders at the dinner of the Danish Queen. Bizarre. The dinner ended, no paper.

Then suddenly there was another buzz: upstairs in the same conference room, all leaders were called in. French president Nicholas Sarkozy and UK Prime Minister Gordon Brown were in the lead, making it clear the Danish government had been shoved aside. The big guys had taken over.

It was now around midnight. The meeting had all the big ones inside, except Obama, who had not arrived; our Prime Minister came late and the Chinese Premier came and left. As people left the room, it was said no paper was given, but it would be soon.

This was around 3 am. From then to sometime in the afternoon of that mind-blowing Friday, paper after paper of the agreement made its way to the meeting.

Inside the room, all leaders gave their end speeches, sticking to lines. There was still no agreement to sign. The elements contained in the draft paper had already been rejected by the countries as a whole. It was too weak in its targets to cut emissions and too distasteful in its unjust future framework.

Then suddenly, a new twist came. Suddenly an announcement: the leaders of the basic countries—the big polluters of the developing world, Lula of Brazil, Zuma of South Africa, Manmohan Singh of India and Wen Jiabao of China, had agreed to a private pact with US president Barack Obama.

A few others, all clearly under pressure, also nodded to an agreement—the infamous Copenhagen Accord, which repeated the same non-principles of the Danish paper but added an inducement of some US $30 billion in start-up money and some US $100 billion by 2020 for finance for adaptation and mitigation.

The Copenhagen Accord had been signed, it was said. The meeting was a success. Celebrations broke out. Almost.

The meeting began to endorse the pact. Things went wrong again. The arm-twisted accord came unstuck. First to reject it was Tuvalu—a tiny island nation in the Pacific which could go under without tough emission reduction commitments to keep temperatures under 1.5°C.

More voices spoke. Against. The UK and the US spoke loudly for the accord. They openly induced, via the money promised. “Countries that don’t sign won’t let the funds get operationalized.”

But no consensus was evident. “Our principles are not for sale. Keep your cheque book in your pocket, give us numbers of emission targets, not money,” roared back the Venezuelan delegate.

No accord was possible. Desperation was evident in the faces of the proponents. The Danish PM Lars Rasmussen had sweat on his forehead. At one moment, as he declared that the accord was dead, the UK minister Ed Miliband rushed to call for an adjournment. Clearly, there was more pushing and cajoling to be done backstage.

After a long wait, the meeting was reconvened. The UN secretary general was called in for help. But to no avail, as countries refused to allow the accord to be passed with consensus.

It was agreed that it would be ‘noted’ and that countries which wanted to associate with it would write to the secretariat and get themselves listed as friends, supporters and, I guess, recipients of the money promised.

The story isn’t over. Let us be clear. Copenhagen is the point at which the world has shown its true colours— the polluters will not reduce and will not pay. We are all poorer for it. The question now is: what can and must we do?