Although the World Trade Organization is not the South's favourite negotiating platform, the latter must strengthen itself against the Northern moves 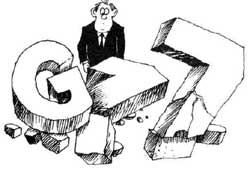 IT is an irony that the Group of 77 (G-77) - a caucus of over 130 developing nations in the United Nations (uN) system - originally created at the first UN Conference on Trade and Development (UNCTAD) is the only global forum where meaningful global trade negotiations take place.

The World Trade Organization (WTO) and its predecessor General Agreement on Tariff and Trade (GATT), is understandably, not the South's favourite forum for global dialogue. However, after the recent stripping down of the UNCTAD'S mantle and the steady erosion of its secretariat's efficacy as a credible think-tank for developing countries, the WTo has become the single most important negotiating forum for issues on trade and development.

The negotiations now taking place at the WTo are not only going to affect the trade rules for the next century, but could effectively determine how and which developing country progresses along which particular lines in future.

The very fears that had first spurred the South to unite under the banner of G-77 in 1963 - the creation of a global order that would take away from the South the token ability to make their own developmental decisions - are now realising the reality around those polished tables at the majestic WTO office on the Rue de Lusanne in Geneva.

Officially, an institutional decision has been made by the WTO (and the GAT-r before it) to bar the G-77 from representation; unofficially, a bruised G-77 suffering from pangs of self- doubt seems to have given up on the fight and resigned to being a mere bystander.

This is not to say that the South has sat entirely helpless at the WTO. Regional coalitions, particularly countries of the Association of South East Asian Nations have played a leadership role at the negotiations, and the forthcoming wTo magisterial meeting in Singapore promises to witness a spirited fight from the South.

However, the absence of an organised G-77 has already cost the developing countries dearly. Arguably, an organised G-77 at the WTO would even help the interests of the Organisation's leadUship by streamlining the deliberations and allowing the developing countries to arrive at a joint platform, instead of taking the discussion into all sorts of trajectories as each country pushes for its own particular micro-interests.

Common platform negotiation by the South at the WTO/GATT under the G-77 banner has long been considered a theorem in impossib4lity by several Northern as well as Southern nations. However, the historical precedents for considering it as such no longer exist. With the UNCTAD reduced in size, scope and significance, the South can no longer afford to ignore the WTo and chant the mantra of the UNCTAD being the more important global 6ade organisation. Simultaneously, the bosses in Geneva can no longer live under the false assumption that the Qnly capitals they owe allegiance to are in North America an@ western Europe. Neither can now claim any justification for why the G-77 is still not operable at the WTO.

Having said all of the above, it is unrealistic for the developing country delegates at, the WTO to wait for an invitation from the organisation to muster themselves under a G-77 (or a similar) structure. In 1963; it was not the UNCTAD that formally invited the South to uniteltself, that was the South's decision emerging from the necessities of time, and enacted with significant opposition from the North. It is time for another such decision to be taken, which eventually might become even more historic.

Whether the G-77 is immediately admitted to the WTo as an institutional entity in many is not the point. The point is that the developing countries of the South must act in unison at the preparatory, position-formulation stage of these negotiations. These negotiations, their acceptance within the official rosters, will only be a matter of time and anyhow, will become academic.

To call for the developing countries to organise themselves at the WTO is not a call for a new confrontation; it is exactly what it is purported to be - a call for better organisation. The industrialised North is getting increasingly better prepared for this complex set of negotiations. The only way that the developing countries can be well prepared is by being well organised.

Adil Najam is a member of the Environmental Policy Group, Department of Urban Studies and Planning at the Masachussetts Institute of Technology, US, and is affiliated with the Program on Negotiation at the Harvard School