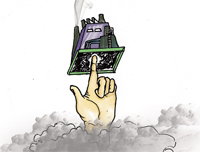 When the Centre for Science and Environment (CSE) started its Green Rating Project in the mid-1990s, India had just liberalised its economy. Fears were that it would be disastrous if the country took the route to economic growth that ignored environmental considerations. The Green Rating Project was designed to find ways of measuring the environmental performance of companies and to drive changes in policy and practice through public disclosure.

First we rated the pulp and paper sector that has a massive footprint on the environment. It is also a sector that needs huge quantities of water for production and creates pollution on a large scale. When CSE wrote to companies about its public disclosure project, the response, to say the least, was lukewarm. Frankly, they did not have a clue about environmental management. They did not know what to monitor or measure, nor did they have a department for such affairs. Only one company had an ISO 14001 certification. The first rating put emphasis on management systems. But an interesting outcome was the gradual opening up of this sector to public scrutiny and disclosure. There was willingness to engage, a desire to learn. The rating was successful, especially if one considers the fact that when we returned to this sector some five years later, we saw much improvement. The industry accepted the fact that the benchmarks we provided on different resource use and environmental performance parameters helped it improve its accounting. This in turn cleaned up its act.

When we rated other sectors—automobile, chlor-alkali and cement—in the first decade of this century we thought India had crossed the environmental hump. In each sector we saw improvement. By the time we reached the cement sector we noted Indian industry was close to the global best on many parameters. Environmental performance was worse where there was no visible push. But on the whole, everything looked better. By then environment was the in thing; company heads were discussing this; management systems existed and there was public adulation for companies with green credentials. Even the most polluting industry would not say that it was not green. We were ready to say that environment had been mainstreamed in Indian industry.

However, in 2012 we would like to revise our assessment. It follows from the rating of the iron and steel sector. It is the core sector of the economy (with its own Union ministry and its very own prime minister’s award for best performer) that involves the biggest industry names. Rating it has been a shocker. The Green Rating Project’s assessment, after two years of detailed plant-wise scrutiny, is that this sector is non-transparent, non-compliant with weak environmental norms and is getting away with it because of an even weaker regulatory framework.

What is also clear is that economics of production is a key driver for change. It makes companies innovate to improve the bottom line. In this sector, which is all about material and energy, anything that companies do to improve their bottom line also works to better environmental performance. It is interesting to note that top three companies work against economic odds. They import fuel and do not have captive mines for iron ore. In gas-based Essar Steel at Hazira and Ispat Industries in Raigad energy costs are as high as 23-30 per cent of the turnover. In Rashtriya Ispat Nigam in Visakhapatnam iron ore constitutes 17 per cent of its turnover and coking coal another 31 per cent. But in Tata Steel in Jamshedpur, Jindal Steel and Power in Raigarh or SAIL in Rourkela the cost of iron ore is only 3-10 per cent of the turnover.

So, there is no level playing field. The top three companies have no option but to innovate. They have invested in efficient technologies and work hard to reduce the cost of energy and improve material efficiency by ensuring reuse. This effort, made for economic imperatives, also improves their environmental performance. But it is incidental, not deliberate. That’s why it is not enough, and it shows up in the CSE scorecard. Even the best company, which has inherent advantages of running on clean fuel like natural gas and imports its coking coal, scores a low 40 per cent.

The poor environmental performance of this sector points to the complete failure of the regulatory institutions. Nobody is asking this sector to improve its green bottom line; nobody measures and monitors actual performance. One should not be surprised for the country has worked to decimate its pollution regulatory structure.

As I said, this does not bode well for the future. This is a sector that is expanding fast. Within this decade steel production has gone from 24 million tonnes annually to close to 70 million tonnes. It is aiming to be a 100-million-tonne industry in the next four years. If expansion takes place in this business-as-usually-bad scenario, environmental costs will be too high for the country to bear. Therefore, there is only one way ahead: to move towards a truly green steel industry, and not spend more time on greenwash. This is technically achievable. The only question is who and what will drive the change.