In the past, people feared invasions by neighbouring kingdoms because apart from the threat to life and limb, their culture and way of life could be lost to the invaders. A far cry from the invading armies of yesteryear, today’s invasions are aided by more commonplace means such as world wide commerce and tourism. The raiders of today are certain plants and animals who have travelled, often as hitchhikers, to new territories and in the process affected the native or original flora and fauna of a region.

Research on modern day invasions suggests that fast-growing, rapidly reproducing species capable of adapting quickly to new environments can become invasive when introduced in new areas. Some invasive species have received a lot of attention due to their potential to create great economic losses (Zebra mussels in North America) and others have had ecological impacts (Lantana camara). One study estimated the environmental damages and losses caused by invading alien species in the United States of America at $120 billion each year.

The plant Hyptis suaveolens, commonly called pignut or chan, has not attracted much attention. But it is starting to show symptoms of becoming invasive in India.

Native to tropical America, Hyptis was introduced widely across the world and is now found in tropical Africa, Asia and Australia. In India, British botanist Joseph Dalton Hooker recorded Hyptis in the late 19th century in the Deccan and Cachar regions but not in north India. Around the same time, John Firminger Duthie, an English botanist and explorer, did not record the plant in the Upper Gangetic Plain, a vast area bounded by the Himalayan foothills to the north and the Vindhya mountain range in the south. 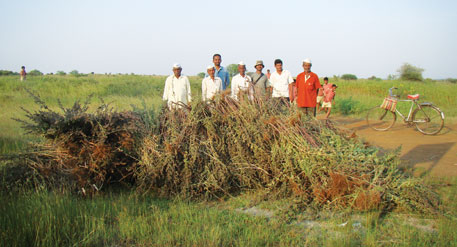 A century later, researchers found that Hyptis had invaded certain areas of the Vindhya plateau. In the Himalayan foothills the species was reported by the mid-1970s. A recent study in the Doon Valley and Siwalik foothills has estimated that up to 11 square kilometres have been invaded by Hyptis, primarily along riverine areas, forest edges and open areas. This suggests that the plant is spreading across India.

Hyptis reportedly establishes in different kinds of areas: alongside roads, railway tracks, forest clearings and areas typified by rocky and arid substrates. Several traits of the plant enable it to spread. It produces a large number of seeds that bear hooks, which enable the seeds to be transported from one area to another by attaching themselves to the fur of passing animals or clothes of humans. The plant can tolerate dry periods. It contains chemicals which inhibit the growth of native species, as demonstrated in the Vindhya plateau, where it altered the composition of native plant diversity. 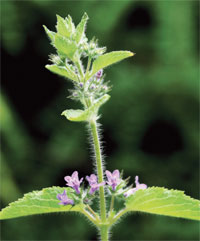 The plant is unpalatable to livestock. So if Hyptis is allowed to spread unchecked, the diverse set of native plant species that are food for livestock will be replaced by an unpalatable weedy monoculture.

Hyptis could join the ranks of other invasive plant species like lantana and parthenium and have negative effects on native biodiversity if steps are not taken in earnest to control its spread. As in any attempt to control invasive plants, the best approach is early detection and removal. The best and most cost-effective method to control the spread is physically uprooting the plants before they have formed seeds—right after monsoon. Scientists at the Kerala Forest Research Institute have classified Hyptis as an invasive plant that poses medium risk to native flora. More such assessments are required.

In the past, kingdoms went to great lengths to keep invaders at bay; the Great Wall of China is one such attempt. Unfortunately, even an architectural feat such as the Great Wall will not be able to keep today’s invaders in check. Strictly enforced regulations at customs and border checkpoints will help but in today’s era of globalisation the risk of species being transported to new regions looms large.