The West is holier than thou on China

In New Zealand, where I live, and in Australia, the pro- us media is today loaded with anti-Chinese propaganda. Only one metropolitan daily newspaper in New Zealand is not controlled by pro- us interests. It regularly exposes us propaganda. For example, it found that claims of formaldehyde contamination in Chinese-made children's clothing were incorrect. Reliable re-testing found that the levels of free formaldehyde in the clothes were well within permissible limits. Those who made the allegations were forced to admit their mistake but they made no apology to China.

I am not surprised to find that people in us policy circles are calling for a boycott of the Beijing Olympics on a variety of grounds, most of which are being fabricated and promoted through us media networks. 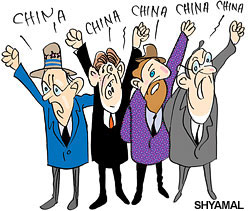 China's profile in the world would surely go up if the games are successful. The us and its allies would find that a bitter pill. Chinese economic prosperity hasn't been a pleasing development for them. In fact, in 2003-2004, the us senate acknowledged that the Chinese economic growth posed a major threat to us dominance.


I have lived and worked as an environmental planner in the us , Canada, Australia and New Zealand and found that these countries have far worse environmental and human rights records compared to China. Powerful business establishments can contaminate the environment with poisons, pesticides and toxic wastes with impunity here.

Australia and the us have by far the worst record in human rights violations. Poisoning by industrial wastes and agrochemical toxins is highlighted by the high rates of Alzheimer's, Parkinson's, motor neuron diseases and a host of avoidable cancers in these countries. I am sure many are aware of the protection provided by the Bush administration to us corporations manufacturing toxic pesticides.

Yes, there are definitely problems in China, many traceable to corrupt officials and corporations following western models of production. But in China, cases of official corruption are dealt with more severely compared to those in the West.

I have also discovered--much to my delight and surprise--that in many fields, China is providing leading models of sustainable development, especially through natural farming and forestry initiatives in mountain watersheds. China is planning new eco-cities for its growing urban population. The widespread use of international certification systems in China validating compliance with un Agenda 21--international law for human rights, sustainable development and environmental protection--is arguably second to none.

Recently, I led a team of New Zealanders on a study tour to China to examine Tao natural farming systems. We spent most of the time in places where few tourists go; where ordinary Chinese folk live and work. At our summary session the team agreed that New Zealand has a long, long way to go to catch up with China in many fields including environmental conservation.

We have corrupt officials and our police force has a horrible record, we also have a deplorable record of child abuse and teenage suicide, and our local governance is sometimes terrible. An audit of our local councils showed they engage in commercial blackmail and deception. What was even more deplorable was that the New Zealand minister for local government refused to act against the councils, even when presented with a lot of credible evidence. As a Koorinesian elder of Eora-Waiora ethnicity born in Australia, I am ashamed to say that the country of my birth carries out a virtual genocide against aboriginal people. Just this year Australia, us, Canada and New Zealand were the only countries to vote against a declaration extending full human rights to indigenous people. Their refusal to acknowledge or commit to the us declaration on indigenous human rights speaks volumes about these dysfunctional cultures.

Haikai Tane is a geographer, ecologist and planner. He can be contacted at tanah@watershed.net.nz