The wisdom of the unlettered 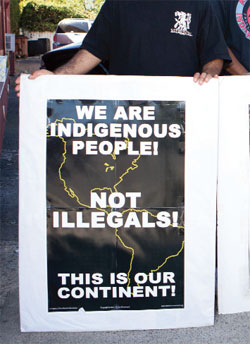 On October 12, the US marked Columbus Day with the now-usual celebrations and protest. The day commemorates the landing of Christopher Columbus in the New World. For many Americans, it is a way of honouring Columbus’ achievements. Others contest the celebration of an event that indirectly resulted in the colonisation of the Americas and the annihilation of indigenous people.

But for the past two decades movements have been trying to reclaim—and transform—the holiday into a celebration of indigenous people’s resistance to colonisation. And this year the indigenous protestors made common cause with the Occupy Wall Street public protest movement that began in New York City in September. The American Indian Movement of Colorado has joined the Occupy Wall Street Movement by issuing An Indigenous Platform Proposal for Occupy Denver that challenges the anti-capitalist movement “to integrate into its philosophy, a set of values that respects the rights of indigenous peoples, and that recognises the importance of employing indigenous visions and models in restoring environmental, social, cultural, economic and political health to our homeland”.

In the past decade and a half, however, historians have begun to look somewhat differently at Columbus’ voyage. Among the pioneers of the new approach is Brian Fagan of University of California, a leading archaeologist of our times. Fagan believes that fish had as much a role in the discovery of the New World as the quest for spices. He shows how the growing demand for cheap and edible fish on a mass scale for the urban poor and for the growing armies of Europe pushed European ships across the Atlantic and opened up “the age of exploration”.

People in late-medieval Europe required vast quantities of fish, because the church strictures meant meat was forbidden for almost half the year. When a change in climate in the 1300s, forced fishermen in the northern waters to range more widely, they ventured as far as Newfoundland. Fagan believes these seafarers did the spadework for the European settlement of North America. Columbus was a heir to a vast body of knowledge about seas and ships acquired at great cost by generations of unknown fishermen.

About three decades ago, accounts like those of Fagan, could have been regarded as retrieval of the wisdom of the unlettered. But in today’s world, the quest for such understanding has different and more complex connotations. The political impulse to find views of the world at discord with those of the victors remains valid. As is the belief that there are multiple ways of looking at events and processes, and they are not always in harmony.

There is, however, another aspect we need to factor in. Many kinds of indigenous knowledge did reach high pedestals even in colonial times. But that happened without any benefit to those who nourished the wisdom. As the ships of the European East India Companies, that were formed in the wake of the age of exploration, set sail, renaissance botanists urged the colonists to “bring leaves and fruits foremost of commercially important spices and fruit trees, also from any kind of trees that seem strange.” Apothecaries were established at European universities and stocked with plants imported from the colonies. It was, however, not just about raw material. Description of the plants and their properties were plagiarised from indigenous sources. Historian Richard Grove has shown how the pioneer botanist, Carl Linnaeus, drew from Hortus Malabaricus, a 17th century Latin text that was almost completely lifted from the oral wisdom of Ezhava physicians of Kerala.

There is another trend. Much of it well-meaning and necessary: celebrating indigenous wisdom, compiling directories and compendiums of such knowledge. This endeavour does credit the original creators. Compilations are a great way to ensure that knowledge does not die. But such projects seem to take people’s knowledge as fixed and not as results of negotiation with society and ecology over time. Some of that negotiation still happens. One shortcoming of compendiums is they cannot account for such negotiations. Once compiled, indigenous knowledge gets frozen.