Theory of evolution under scanner

Another body blow for the myth of choice 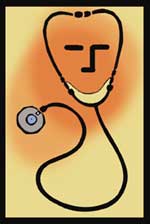 a body representing the world's leading science academies have issued yet another appeal, albeit veiled, warning against teaching an obscurantist theory about the origin of life -- call it intelligent design or creationism -- in science classes. The eminent evolutionary biologist Richard Dawkins made the point much earlier in a trenchant fashion. The argument is simple. Science has to be taught in science classes and courses. As many theories about as many things can be taught, but all of them have to meet some recognisable criteria of what constitutes scientific enquiry: experimental testability, logical rigour and empirical research are only three of these. To argue that choice justifies sneaking in theories that don't come anywhere near meeting these criteria is a travesty. And nobody could possibly argue that biblical accounts of the evolution of the cosmos and life on earth meets standards of scientific exploration.

Those who are not comfortably wrapped in the certitude of their truths -- as most proponents of worldviews based on faith and revealed wisdom are -- usually admit the limits of knowledge. The signatories to this appeal have done so by acknowledging that evolutionary science does not have all the answers. Philosophy, theology, cultural theory and the social sciences obviously have much to contribute to the understanding of the historical trajectory of human evolution. But to dismiss the domain of the natural sciences -- particularly evolutionary theory -- with spurious arguments, as creationists did when they repeatedly argued that Darwin could not have been right because evolutionary biology did not explain the link between the transition from aquatic to terrestrial life is utterly jejune. That myth was exposed by the discovery of a fossil that indicated the lineaments of the transition (see 'Missing Link', Down To Earth, May 15, 2006). But if one hunkers down, it's not that difficult to pick a few more nits as no doubt the army of obscurantists will continue to do.

There have been disturbing reports from the uk that science students in institutions want to exercise choice through the dissemination of non-science in science curriculums. But there is good news as well -- not long ago, the Archbishop of Canterbury threw his weight behind the opponents of choice as did courts in the us. Clearly, pro-choice is not always the right slogan.