They lived with dinosaurs

Sea turtles have inspired far-reaching conservation programmes. Pity, they are still in peril

Sea turtles are magical animals, all the more mystifying because of our ignorance about them. For millions of years, they have wandered the oceans. But today, they are threatened by habitat loss, lighting on beaches, which disorients hatchlings and prevents them from finding the ocean, pollution and consumption of adults and eggs. Fishing-related mortality has caused the deaths of hundreds of thousands of turtles worldwide sea turtles are air breathers and when they get accidentally caught in fishing nets, they drown.

In India, government policies such as Special Economic Zones and Coastal Management Zone Notification 2008 have been criticized for potential impacts on coasts. Not only are sea turtles and other marine organisms threatened, but also people dependent on marine resources for livelihoods. The future of sea turtles might seem bleak.But they have inspired some of the most creative and passionate conservation programmes in India.

On a moonlit night in December 1988, crouched on a beach in Chennai, I saw my first olive ridley. We watched the female turtle come ashore, crawl up to a dry part of the beach, dig a 2 feet deep nest with her hind flippers, and lay 100 to 150 eggs. The hatchlings would emerge about two months later, and under the cover of darkness, make a dash for the sea which they would find by the reflection of the moon and starlight on the water. The hatchlings drift with oceanic currents, sometimes traversing the entire oceans. When they become adults, 10 to15 years later (up to 50 years for some species), they use the earth's magnetic field to find the beach where they were born, so that they can start the cycle again. I was then part of a small group of students who had decided to make a contribution to sea turtle conservation. Sea turtle conservation in India had been initiated a decade and a half earlier in Chennai by Rom Whitaker, Satish Bhaskar and a small band of turtle walkers, with a hatchery in a friend's backyard. Nearly 20 years later, as some of those hatchlings we released have hopefully reached adulthood, the group still flourishes, as do many other small ngos throughout India's coasts, including students, communities and animal rights' activists.

In the past two decades, these ngos have released thousands of hatchlings, but their impact has possibly been far greater. Hundreds of students and volunteers have helped run these programmes; thousands have been on turtle walks. Many got involved with conservation, others became teachers and activists. Many more went on with their jobs, forever touched by the sea turtles. 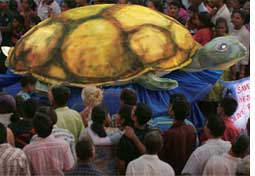 In Orissa, more than 100,000 dead turtles have been washed up in the last decade. Several ports have been planned. The one planned at Dhamra is less than 10 km from Gahirmatha, a major nesting site for the ridleys. A recent movement here is the Orissa Marine Resources Conservation Consortium fishworker support groups and conservationists have found common ground in conserving marine resources and endangered species and enhancing livelihoods of local people.

Sea turtles are among the many species threatened by human activity. A lot of these will not benefit us directly. But we need to find ways to conserve them and their ecoystems for the services they provide, and also for their value as part of our natural heritage.

Kartik Shanker is at the Centre for Ecological Sciences, Indian Institute of Science, Bengalooru