This DROUGHT is sponsored by Govt. of India

Who is really behind our water problems? 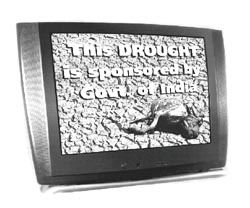 it was a meeting with an amazing lesson. The subject was rainwater harvesting. But the message was one on governance. And a truly stark one. If only India could learn from it.

Since the release of its book Dying Wisdom: The Rise, Fall and Potential of Traditional Rainwater Harvesting Systems in 1997, the Centre for Science and Environment ( cse ) has been advocating the importance of rainwater harvesting. Simply because its potential is enormous. A mere 100 mm of rainfall when captured on one hectare of land gives as much as one million litres of water. Therefore, there is no village in India, I repeat, no village, which cannot meet its drinking water and a reasonable part of its irrigation needs through rainwater harvesting . And the same goes for airports, railway stations, cantonments, industries with large estates, and a whole lot of institutions. Today, cse itself ensures that not a drop of rain goes out of its premises. Through simple engineering structures, in a normal year, its 1,000-square-metre land area collects seven lakh litres of water which go straight into the bowels of Mother Earth to recharge the depleted groundwater reserves.

But clearly, the acid test of the potential of rainwater harvesting will be the drought season when there is a desperation for water, people are fleeing homes, and those who remain behind are digging the riverbed for a pot of water. So when I heard that a serious drought had gripped Rajasthan, Gujarat and western Madhya Pradesh, a region in which many communities have undertaken rainwater harvesting, Down To Earth's reporter Manish Tiwari went to see how these villages were faring as compared to those which had not undertaken water harvesting previously. Manish returned extremely excited. While neighbouring villages were desperate for water and many villagers were beginning to flee, he said, the water harvesting villages not only had water to drink but also some water to irrigate their crops. The concept of rainwater harvesting was thus standing my acid test to the extent that people are saying that after this drought many communities will demand support for water harvesting programmes.

Overall, the news was and remains bad. Gujarat was already suffering a serious drought in September when the elections took place. And not surprisingly, it saw slogans like ' Pehle Paani, Phir Advani '. On December 14, the Gujarat police shot dead three people and injured 20 in Falla village when villagers protested against the state government's decision to reserve the remaining water in the Kankavati dam for nearby Jamnagar town. With the summer in full swing, the state's ruling politicians themselves are sowing seeds of confusion and have set in motion a tug-of-war for the precious commodity. While the urban politicians want to corner the water for their constituencies, their rural counterparts want it for their villages. But few know how to solve the region's water crisis where groundwater resources have been overexploited. And now everyone is fighting for the limited resources available.

We were thrilled by what Manish had found and wanted to bring this important message to senior decision-makers. We, therefore, invited water resources minister, C P Thakur, to chair a meeting to which we invited two water harvesting stalwarts from Gujarat to present their work and experiences.

Unfortunately, the minister fell ill and failed to come but the two made excellent presentations to a reasonably large gathering. Who doesn't want to hear a message of hope!

One of these stalwarts was Hardevsinh Baldevsinh Jadeja, sarpanch of Raj-Samadhiyala villages in Rajkot district, and the other was Harnath Jagawat, head of a non-governmental organisation ( ngo ), Sadguru Water and Development Foundation, working on water conservation with poor tribal communities in Panchmahals district. Jagawat told the audience, "When I discussed the idea of working on water problems in this area in 1994, many government officials and politicians laughed at me.They said: There is no water here. They did not realise that I was thinking of rainwater." Jagawat got the villagers of Thunthi Kankasiya, a village that was shunned by prospective brides, first to build a check dam on the river Machhan and later take up intensive watershed development work.Today the river was turned from a seasonal nala to one that flows round the year. And even this year when the rainfall was only 40 per cent of the normal, the farmers have irrigated 135 hectares and all the 23 wells have enough water to meet their drinking water needs. Jagawat is today working with many such villages like Thunthi Kankasiya.

Jadeja also said that nobody wanted to give their daughters to Raj-Samadhiyala either. But this was 15 years ago. Since then he has encouraged the villagers to build 12 check dams and undertake watershed development. The result: Farmers have sown cotton, wheat, groundnuts and vegetables this year even though the rainfall is less than two-thirds of the normal. On the other hand, the groundwater level in most wells is only about three metres. Jadeja, who left the Central Reserve Police Force to go back to his village, further described with pride the gram swaraj that he has initiated in the village. " We have several rules in the village, " he said. " One of them is that if there is a theft in the village and the person affected reports it to the police, he or she is fined Rs 500. But if the person reports the theft to the panchayat, the latter will find the thief and the money in 24 hours or else reimburse the person for the entire amount." Just imagine what would happen if this rule was applied to the police! The government would probably go bankrupt.

"Another rule we have," went on Jadeja, "is that if anyone's livestock even nibbles the leaf of a tree, the person has to pay a fine of Rs 5 per leaf. And if the owner happens to be a panchayat member, the fine is doubled." Intrigued, I asked him how much money had been collected in fines. "Rs 30,000," he said, "last year." "And did you also have to pay a fine?" I asked probing further. "Yes, as much as Rs 1,600. I own over a hundred buffaloes and everytime one pecks away at a tree everyone comes running demanding money with excitement.And I have to pay double," said Jadeja with great elegance.

After the meeting, a government official present at the meeting asked Jagawat, "Since you make check dams on riverbeds, dry though they may be, do you take permission from the irrigation or forest department." Like Jadeja before him, Jagawat's reply was telling and stark. "No," he said. "I never do. Who wants to waste one's time with them. I work with the villagers. If the government agencies don't like it let them tear the structures down. But then they must be prepared to face the people's wrath. There have been grumblings from those quarters but nobody was dared to reverse anything."

These responses were, if anything, stunning. The disrespect for the rules and institutions of the state among both Jadeja and Jagawat was incredible and by all strict definitions of 'corruption', they were not only indulging in 'corrupt practices' but also encouraging others they were working with to adopt 'corrupt practices'. And what makes the situation even more amazing is that by any definition Jadeja and Jagawat are in today's wide and big India two most committed, sincere and honest persons. We really must sit back and ponder on what we have done to the governance systems of this so-called democratic country.

Summing up, I had to tell the people assembled that the main message of the meeting had turned out to be on the state of India's governance and not merely on the importance of rainwater harvesting to meet the thirst of India. The churlishness, arrogance and incompetence with which government officials today behave with the public, especially the poor, and the corrupt practices they indulge in has now reached unbelievable proportions. No wonder nobody wants to do anything with the government, if they can help it. And yet not a single political party wants to tackle this problem leading to increasing lack of credibility in public institutions.An extremely unhealthy situation for any country at any stage of its economic development.

Robert Putnam, in his brilliant study Making Democracy Work: Civic Traditions in Modern Italy , which took him 20 years to complete, compares the stark difference between north and south Italy while the former, full of civic participation, 'civicness' as he calls it, achieved one of the economic miracles of post-Second World War Europe, the latter mired in feudal relationships still remains backward and dominated by the infamous Mafia.In an effort to decentralise governance, the Italian state created nearly 20 regional governments. Putnam analyses which of these governments work and reaches the conclusion that civic participation is critical for democracies to function.

One of Putnam's key finding is that though we all know that absolute power corrupts, few of us tend to recognise that no power also corrupts . Not surprisingly, nobody in India respects the highly centralised, non-participatory and autocratic governance systems which political parties try to sustain not by promoting good governance but by building strong patron-client relationships and creating a faade of serving the clientele through the official loot of the treasury subsidies, special allocations of projects and natural resources, you name it and you have got it. And beyond these patron-client relationships, the political-bureaucratic systems encourages little decentralisation or development.

Doesn't it remind you of what is happening today in Bihar or Uttar Pradesh and the criminalisation of its politics!

Merely being able to elect a pack of incompetent politicians every few years is not the end-all and be-all of a democratic society. For a country whose politicians love to shout from the tree-tops that India is the world's largest democracy all of you must have listened to the political rhetoric during the recent Clinton visit the total lack of democracy in its governance, where only baburaj and autocracy prevail, is indeed pathetic. Democracy, my foot! We are living in an extremely sick democracy.

The problems of water, I am convinced, will only get solved when democracy enters our governance system when Janashakti (people's power) prevails over rajshakti (state power). I hail the mutinous corruption of Jadeja and Jagawat and of all others like them.