Those magnificent men and their machines

In October this year Prime Minister Narendra Modi told an audience of doctors in Mumbai that if we they were looking for inspiration they could turn to history. “We can feel proud of what our country achieved in medical science at one point of time…We all read about Karna in the Mahabharata. If we think a little more, we realise that the Mahabharata says Karna was not born from his mother’s womb. This means genetic science was present at that time. That is why Karna could be born outside his mother’s womb.” Modi went on to describe the elephant’s head on the Hindu god Ganesha as an example of plastic surgery in ancient times.

Televisions, airplanes and what not

As if on cue, a month later BJP MP from Uttarakhand,  Ramesh Pokhriyal Nishank, claimed in Parliament that astrology is a superior form of science, dwarfing everything else. "All streams of science are dwarfed in stature when compared with the science of astrology. Astrology is the number one science for the entire world," he said. Nishank, who is a former chief minister of Uttarakhand, went on to claim that India had conducted nuclear tests centuries ago.  The ancient sage Kanad, who lived around 2nd century BC, should be credited for this accomplishment, believes Nishank.

Hindu nationalists have for long claimed that modern science and technology is merely repeating what Indians did thousands of years ago.  They have been rubbished by historians and social scientists. So it would be natural to not take the prime minister and his party colleague seriously. Let them deal with governance issues and have a chuckle about what they say about history and knowledge.

Yes, it’s difficult to suppress the chuckle. But these are no comic antiquarians. This is the first time an Indian prime minister has “endorsed” the so-called achievements of ancient Indians and there is something deeply alarming about it. 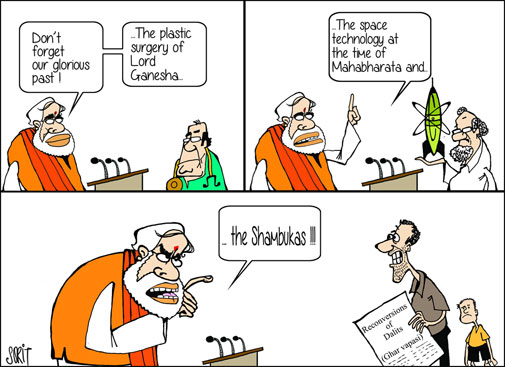 Our thoughts on history, science, indeed all manner of knowledge are deeply political—even though we might not owe formal allegiance to this or that political formation. They say something about our vision. More so when the gentlemen in question are in charge of steering the country; they have powers to direct production of knowledge in the country.

They have already done the laboratory work. This was not the first time Modi was making such claims. As Gujarat’s chief minister he wrote a foreword for a school text book which maintains that stem cell was known in ancient India. Gujarat never implemented the National Curriculum Framework of 2005. The GCERT-engineered textbooks have only one paragraph on the 350 years of Mughal rule in India. One textbook in the state has a story on Lord Shiva’s advice on good health in a chapter on health and nutrition. Another textbook dates TV to ancient times. “In Mahabharata Sanjay inside a palace in Hastinapur, using his divya shakti (divine power), would give a livecast of the battle of Mahabharat,” it notes.  Another textbook credits the Hindu God, Rama, for flying the first airplane.

No room for native genius

While the prime minister and his colleagues have gone to town about the magnificent men of yore and their magnificent machines, they have very little appreciation of the knowledge that has been produced in the country’s fields, forests, artisanal shopfloors, and even kitchens. It involves learning from experience.

Such unlettered wisdom will always have an uneasy relation with the kind of ancient knowledge championed by the Hindu nationalist project. Some of those associated with it do pay lip service to it—sometimes as a counter to Western thought. But traditional wisdom does not sync with the machismo associated with the school that deems ancient India as the font of all wisdom.
Traditional wisdom does not lend itself to indoctrination.  It involves learning from the previous generations and at the same time appreciating the elements: the rain, the sun, the seasons.  Most of this knowledge is not documented. Indeed, some would argue that it’s not even possible to document such knowledge because it’s in a state of constant flux: keeping pace with vicissitudes of nature.