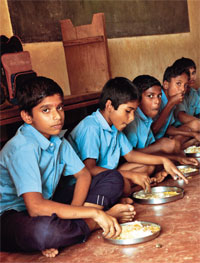 Schoolchildren in Andhra Pradesh get a hot, nourishing meal every afternoon. They are served rice, sambhar (lentil curry with vegetables) and eggs twice a week. This is standard fare. In some regions the children get a different menu and, in addition, weekly supplements like fruit and dessert. The variations depend on which organisation is partnering the state. In the past six years, a number of philanthropists, charitable trusts and private foundations have come forward to provide hot midday meals, using the money allocated by the state and additionally raising funds of their own.

It’s all to the good in a country where an unconscionable 45 per cent of the children are malnourished or suffer from crippling nutrition deficiency-related problems. If we have a government that cannot look after its smallest and most vulnerable citizens, then NGOs, I suppose, are the next best thing. How often can campaigners go to the Supreme Court complaining that children are not being fed in government schools?

Because of the huge numbers involved, the technology that is used for cooking has improved, too. Massive kitchens that steam cook rice, dal, and vegetables in impressively hygienic conditions have come up in several centres to supply tens of thousands of packed hot lunches. One of the best fallouts is that such organisations also source their food stocks from local markets, specially fresh vegetables and fruit. ISKCON, a religious body, feeds 1.3 million schoolchildren daily and its regular menu includes buttermilk, while weekly they give a banana and pongal (sweetened rice). This is the sunny side.

Any privately run system, although accountable to the government, is also open to exploitation. And where there is an opening you can always trust a company to sniff out a market opportunity. In Andhra Pradesh, where the Naandi Foundation handles the midday meal scheme in Hyderabad-Secunderabad, children are, additionally, given Britannia’s iron-fortified Tiger biscuits—a total of 16 biscuits a child every month, according to one study, and 32 in another. Biscuits to end malnutrition? According to the World Bank Institute which prepared a gushing report on the Britannia-GAIN-Naandi initiative, “biscuits could present a winning shorter-term solution” to child malnutrition.

That’s not what any mother would agree with. Biscuits are snacks full of all kinds of additives—emulsifiers, raising agents, dough conditioners and synthetic food colours. And it is not known in what conditions such biscuits are made since manufacturers outsource their production to thousands of small enterprises that can produce them cheap. Britannia, for instance, has been shutting down major facilities and outsourcing the bulk of its production. The key issue is bio-availability, or the body’s ability to absorb the iron. No one has yet proved that fortified biscuits are superior to leafy vegetables and legumes—or that they work at all.

It is not long ago that we had the unsavoury episode of the Biscuit Manufacturers’ Association (BMA) wheedling members of Parliament and former Minister of State for Women and Child Development Renuka Choudhury to give biscuits instead of cooked food in anganwadis that look after children aged 0 to 6 under the Integrated Child Development Services. Choudhury had backed BMA and argued strongly in favour of biscuits because anganwadi cooking was oh, so unhygienic! Fortunately, the Ministry of Human Resources Development would not hear of it, specially after the National Institute of Nutrition nixed the idea.

Britannia CEO Vinita Bali, however, is in a different class from BMA which was rather clumsy in its campaign. Bali is an evangelist on malnutrition. She speaks at World Bank meetings on her company’s efforts to provide sustainable solutions and appears on a popular TV chat show where she says she is not speaking for Britannia but adroitly brings it into the picture. The company, she tells viewers, has been preparing biscuits according to a UN recipe and sending it to Afghanistan and Pakistan. So, biscuits are “great carriers of both calories and micro-nutrients”. Bali is a justly celebrated heroine of the pink press, since she’s done a great job of promoting Britannia biscuits. Over 170 million children snack on it in India.

Malnutrition is a great cause for the business-philanthropy brigade. Practically all the food giants from Cargill and Unilever to Pepsico and Danone are involved in this worthy effort. And the international NGOs inhabit a cosy, incestuous realm. GAIN is a well connected Swiss foundation that gets funds from the Bill and Melinda Gates Foundation, the Wellcome Trust, the US and Canadian aid agencies. Then there is Micronutrient Initiative, a non-profit which “is passionate about helping developing nations save lives by sharing the most appropriate solutions for hidden hunger”, and the National Fortification Alliances, another type of multi-sector partnership GAIN supports apart from the Flour Fortification Initiative. Did I forget the Iodine Network and the Amsterdam Initiative against Malnutrition?

Why then do the world’s children remain so malnourished?