Till death do us apart

Despite tonnes of evidence about the ruinous import of pesticides, humankind, especially in the South, are using just that much -- tonnes of it 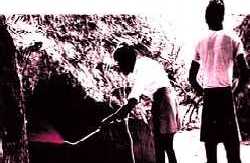 • "Pesticides dwarf the other environmental risks the us -based environment protection agency (epa) deals with. The risks from pesticides are so much greater because of the exposure involved. Toxic waste dumps may affect a few thousand people who live around them. But virtually everyone is exposed to pesticides": Steven Schatzow, director, pesticides division, epa in 'Pesticides finally top the problem list at epa' by Philip Shabecoff ( The New York Times , March 6, 1986).

l "Of all the chemical hazards the public faces from polluted air, water and food, pesticides in food pose the greatest risk": Richard Jackson, chairperson, committee on environmental hazards of the American Academy of Paediatrics ( Current Contents, No 22, 1987).

l "Significantly high levels of food contamination with benzene hexachloride ( bhc), dichloro diphenyl trichloro-ethane (ddt) , aldrin and dieldrin were evident throughout India... The average daily intake of bhc and ddt by Indians... was higher than those observed in most of the developed nations. The dietary intakes of aldrin and dieldrin exceeded the acceptable daily intake (adi) recommended by the fao / who ...": a paper titled 'Persistent organochlorine residues in foodstuffs from India and their implications on human dietary exposure' by K Kannan (Ehime University, Japan) and A Subramanian (Annamalai University, India) published in the Journal of Agricultural Food Chemistry (Vol 40, pg 518-524, 1992). It must be stressed that these pesticide residues obviously came from their use in public health and agriculture.

l "We now have a list of chemicals which have oestrogenic effects and which adversely affect the human sperm. The list includes... organochlorines like ddt, dieldrin and aldrin... Lead has also been identified as a toxicant in semen and so have cadmium and bhc": Andrew Watterson, director, Centre for Occupational and Environmental Health Policy, De Montfort University, Leicester ( The Guardian , July 27, 1995).

l "Women with the highest exposure to the pesticide ddt, have four times the breast cancer risk compared to women with the least exposure... Breast cancer is the most common cancer among women, and a lot of the risk is unexplained": Mary S Wolff, associate professor of community medicine at the Mount Sinai School of Medicine, New York, in a study which links ddt to cancer cases ( The New York Times , April 22, 1993). The rise in breast cancer followed the increase in the use of ddt, suggesting that the two might be linked. Using 58 women with breast cancer and 171 women without it as subjects, Wolff and her colleagues measured levels of a substance that is produced when ddt breaks down in the blood. Women with the highest levels in the top 10 per cent had four times the breast cancer risk than women in the bottom 10 per cent.

These are just a handful of cases which best describe the perils of continuing an existence along with the silent killers -- pesticides. I can add that recent studies by the us National Institute of Environmental Health Sciences support a growing consensus in the scientific community, linking the pesticides to rise in various cancers of the human reproductive system. For example, a survey of women in Sudan, where use of ddt is prevalent, found that pregnant women exposed to pesticides suffered from twice as many still-births as unexposed women. This is not an isolated case. An analysis of still-births in Tunisia also gives the same verdict. (See James H Colpy, 'Poisoning the developing world: the exportation of unregistered and severely restricted pesticides from the United States', Journal of Environmental Law , Vol 13, pg 167-223, 1995).

Thus, it is no more a fallacy that ddt is irreplaceable and that there are no strong evidences against its use ( Down To Earth , Vol 4, No 18). Considerable scientific advances have been made in pest control under the scheme of integrated pest management (ipm) . In countries where malaria disappeared, ddt, and other pesticides in general, played only a tiny role. It was the improved standard of living and an overall management of the environment that defeated the illness. A Sicilian saying states simply: "The remedy against malaria is in the pot!"

Several books on the harmful effects of pesticides have been published. Rachel Carson's 1962 book, Silent Spring, gave the first warning that pesticides are not human-friendly. A new book, Our Stolen Future (Dutton, New York, 1996) by Theo Colborn, John Peterson Myers and Dianne Dumonsky, argues that a bewildering array of hormone-like chemicals threatens our survival by making humans infertile. The most prominent chemical in this regard is ddt. Moreover, the authors claim that these chemicals could give rise to future generations which could be increasingly stupid and aggressive.

Considerable evidence exists that exposure to widely used pesticides such as ddt and other organochlorine compounds may suppress the immune system, making people significantly more vulnerable to infectious diseases and certain cancers, according to a report by the World Resources Institute, titled Pesticides and the Immune System: the Public Health Risks , coauthored by Robert Repetto and Sanjay S Baliga (Washington dc , 1996). Epidemiological studies in Moldova (in former Soviet Union) have implicated pesticides in immune suppression, note the authors. In one study, teenagers in villages where pesticide application was the largest, had two-to-five times as many respiratory tract infections as teenagers from areas of lower pesticide use.

I may add that an outstanding book dealing with pesticide uses and policy in Mexico, The Death of Ramon Gonzalez: The Modern Agriculture Dilemma (University of Texas Press, Austin, 1990) by Angus Wright, professor, environmental studies at the California State University at Sacramento, is worth reading. Observes Wright, "Pesticides make people much more susceptible to Streptococcus infections such as rheumatic fever which weaken the heart."

The author upholds the following thesis which may apply to many developing countries: "While the Mexican government justifies pesticide subsidies and give-aways by claiming that pesticides stabilise rural income and welfare and that the availability of cheap agricultural inputs encourages investment in agriculture, it appears more likely that they are trying to convince the cart to pull the horse by encouraging agriculture to absorb products that spur industrial growth and / or growth of nationalised firms. The government-owned or financed banks and factories required farmers to need the factories, otherwise, these firms that represent the milch cows of patronage and corruption, would no longer have been able to grow, nourishing the political system as they did."

In this context, it is to be mentioned that the World Bank has lent almost us $1 billion to India to create a pesticide and fertiliser industry. The industry concentrates in the production of outdated, inefficient and hazardous insecticides such as ddt and bhc, which are banned or restricted in most developed countries. Most of the insecticides are applied to domestic agricultural projects in the developing world.

At one point in the '80s, Indian farmers were using 77 per cent of ddt, 94 per cent of bhc and 64 per cent of malathion of the worldwide consumption. Recent studies show that these compounds have a common sink -- oceanic air and surface sea water -- and that they experience global transport. (See Hisato Iwata et al , Environmental Science and Technology , Vol 27, No 6). One must point out that ddt and other organochlorine pesticides are on the list of agrochemical products banned or severely restricted by the United Nations General Assembly which was adopted on December 12, 1982, resolution no 37/137.


Synthetic pesticides seem to be the current rage in India. But this offsets the important move towards more environment friendly techniques and blurs the picture of increasing global trends to stop using agrochemical compounds. It is important to mention here that at least three northern European countries -- Sweden, Denmark and the Netherlands -- have passed legislation mandating reductions of 50 per cent or more in the total use of agricultural pesticides by the year 2000. This includes all categories of agricultural pesticides.

These European initiatives, which are targetted because they set measurable goals, may be the writing on the wall for future policy directions in the us and some other countries such as Germany and Belgium. Even in Indonesia, the usage of many hazardous pesticides has been banned and ipm has been brought to the fore.

Larbi Bouguerra is a Tunisian scientist, currently based in Paris and works for an organisation called 'Federation for the Progress of Man'