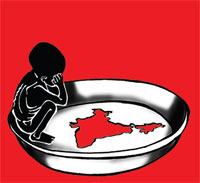 For the past two years experts have been questioning the adequacy and use of India’s poverty line. Most of the criticism points to the fact that the definition is outdated and its expenditure limit indicates a “starvation line”, not poverty. Now, there is a similar debate over the international poverty line of $1.25/day. Like the debate in India, the international poverty line faces the criticism of being outdated. It does not reflect the new realities of rising food inflation, change in basic requirements and climate change that is making people vulnerable to regular natural disasters.

The debate started with two contradicting reports from two equally competent institutions: the World Bank and the Asian Development Bank (ADB). In August, the media reported that the World Bank had decided to revise the international poverty line to $1.78/day. If the new poverty line is applied, the number of the world’s extreme poor will come down by half. This is led by drastic reduction in the number of poor in India and China.

On the other hand, in the first week of September, ADB released a report demanding redrawing of the poverty line, reflecting the changed living realities in Asia. It suggested a new poverty line, $1.51/day. This definition increases poverty levels by 9.8 per cent in Asia.

Notwithstanding the differences between the two poverty lines, what is important is the contribution the two reports have made in reviving the debate. Why should one change the poverty line? First, the global poverty line is based on outdated data, culled from 15 countries, mostly African. Secondly, there are stark differences between the levels of poverty in different regions. A poverty line based on data from Africa may not reflect the socio-economic conditions in Asia. Thirdly, there have been changes in the basic requirements of people. There are expenses people never thought about in the 1980s. For example, using a modern cooking medium or a mobile phone. Fourthly, climate change and food inflation make people vulnerable to regular financial shocks.

So why is there a difference in the estimates given by ADB and the World Bank? The World Bank only adjusted the distortion in exchange rates of currencies to estimate the new poverty line. This led to a reduction in poverty in emerging economies like India and China. But the poverty line proposed by ADB incorporates the impacts of food inflation and vulnerabilities to climate extremes. This justifiably increases the number of poor.

This also explains a popular perception in countries like India. Often, we get a high GDP growth but the level of poverty does not register a suitable drop. An average rural Indian spends more on food than an urban resident. But the poverty line does not get updated according to food inflation. In any case, food is just one of the parameters that decide the poverty line. There are many new fundamentals in the life of a rural Indian­—paying for transport, mobile phone and private healthcare. Add to these the increasing vulnerability to natural disasters. India’s poverty line or the global poverty lines do not factor these expenses.

It is time the debate changed the regime of poverty line. There should be region-specific poverty lines, for example a poverty line for South Asia. This will help in factoring a region’s socio-economic conditions and vulnerabilities. Once we do this, there will be a near real assessment of the level of poverty to target eradication. As the world decides on a new set of development goals, the poverty line should be junked to begin with.