Time to wake up

The demand for water and energy is likely to increase at a geometrical rate in the coming years. What are the policy options for a better management of these resources? 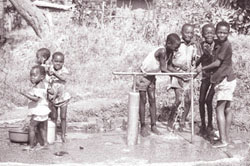 the first World Water Forum was organised in Marrakesh, Morocco, on March 21-22, 1997, as one in a series of meetings preceding the un General Assembly Special Session (ungass) on a five-year follow-up to the unced. One of the objectives of the forum was to mobilise political support for increased international cooperation in the field of water. In connection with ungass, a special fresh water resources assessment has been taken up. The study shows that demand for water has grown at more than twice the rate of population growth. About one-third of the world's population lives in areas which are water stressed. This has serious implications for economic development in general and food production in particular.

Water is essential for all life forms and energy fuels human economic development. The two are closely interconnected and our management of these two resources will determine the sustainability of our economic system. The impact of water and energy shortages is felt most by the poor who spend a large portion of their income on water and energy. Their livelihoods and their very survival are threatened by such shortages.

Our economic and technical systems are part of the larger natural system, and not the other way round. Economic development has often meant conquering nature and extracting as many resources as possible from it. The resulting damage in the form of deforestation, land degradation and pollution has been massive. The challenge is not to integrate environment into economics, (how can something larger be integrated into something smaller?) but to ensure that our economic and technological systems become more closely integrated with the natural systems in which they function.

Everything in nature functions in cyclical modes. No event in nature is an unproductive end in itself. Rather, it is part of a never-ending chain of productive events. The economic and technological systems must be made equally productive.

Today's technological systems are mostly based on linear flows of resources. We extract resources from the earth, turn them into services and products and eventually leave them behind as waste products. Integrating resource flows with natural systems involve treating residues from various processes as a resource and not as waste. For developing a sustainable economic system based on these principles, water and energy must be given absolute priority.


The 1997 State of the World Report shows that world grain harvest tripled from 1950 to 1990 because of a 2.5-fold expansion in irrigation (increased use of fertilisers was also important). Yet, economists have always taken the availability of water for granted when projecting future food production. Water scarcity - and other environmental resource constraints - simply do not appear in conventional economic models.

The instinct to conserve water is closely connected to the scarcity of water. Water-scarce countries like Israel and Saudi Arabia have learnt to secure the limited supply of water and use it efficiently. However, where water is plentiful it is often wasted. The same goes for areas where the scarcity of water is not reflected in the market price due to subsidies.

For a more efficient use of water, its price must reflect its actual value. Water subsidies usually benefit the middle class and the rich and not the poor who are its intended beneficiaries. The poor are most often not connected to public water systems and spend up to 20 per cent of their budget on water.
Though the debate on energy so far has centered on problems of security and pollution, for the poor, energy scarcity is a very serious problem. An estimated two billion people still use fuel wood and animal dung for cooking and almost as many lack electricity. Add to that a host of problems related to pollution, most of which affect the poor the most.

A recent undp report, Energy After Rio: Prospects and Challenges , prepared as part of its five-year follow-up to the Rio Earth Summit, looks at the critical linkages between energy and poverty, gender, health, and water. The main conclusion is that energy is crucial to any serious strategy for poverty eradication.

The World Energy Council projects that the annual energy investment requirements world-wide will rise to approximately us $750 billion by the year 2020, up from us $450 billion in the mid-1990s. A significant part of this increase in energy demand will occur in the rapidly growing economies of the developing world where basic energy infrastructure development is currently taking place.

No doubt, major parts of the projected investments are needed but there are at least two caveats. One, where would all the necessary financial resources come from? Second, what will be the environmental impacts?

The concept of cyclical use is today partly applied to water, but the same thinking must guide our energy policies as well. Almost 80 per cent of our energy needs are met through fossil fuel reserves, which were formed over hundreds of millions of years. We are rapidly exhausting them over a couple of hundred years. The consequences in terms of pollution, in particular climate change, are serious. The process can be compared to filling a water container for hundreds of years, and then emptying it in less than an hour.

Though hydro-power generation is a pollution-free and renewable source of energy, large-scale hydroelectric power dams often have a negative impact on the surrounding environment. For example, the planned Three Gorges dam in China will submerge 13 major cities and displace more than one million people. The Bakun dam in Sarawak, Malaysia will inundate 70,000 hectares of pristine rainforest, resulting in loss of precious biodiversity.

According to the undp report, Energy After Rio... , recent developments in solar, wind and biomass-based energy technologies and fuel cell technologies have given us the means to develop energy strategies increasingly based on efficiency and renewable and non-polluting technologies.

India, for example, has already taken a lead in wind power generation. Modern biomass technologies look increasingly promising both as a supply of fuels and for electricity generation. There is plenty of marginal land that can be used in Africa, in particular, for commercial biomass crops cultivation. Africa has even been projected as a net exporter of energy based on biomass and solar technology in the next century. Solar power has great potential in rural areas. Photovoltaic cells are currently being deployed in small-scale, stand alone power applications in many parts of the world.

Such decentralised systems can significantly lower total investment for electrification than investing in traditional centralised grid-based systems. The freed-up capital could be used for other important purposes.

Technological advancements in end-use efficiencies offer great promise and would allow the utilisation of more energy from the same or lower inputs. According to the undp report, end-use efficiency can today be improved by 20-50 per cent in existing energy installations and 50-90 per cent in new installations. One area of interface of energy and water is in the field of irrigation, which uses as much as 25 per cent of the electricity generated in India. If irrigation technologies can be made efficient we would save both water and energy.

The legal, institutional and fiscal frameworks also need a rethink. One critical issue, no doubt, is subsidies. So long as conventional energy is subsidised, benefiting mainly the better-off, there is little chance for renewable technologies or efficiency measures to be implemented. Estimates tell us that energy subsidies world-wide amount to more than us $300 billion annually, out of which at least $50 billion is in developing countries. In addition, the 'polluter pays' principle must be applied by internalising the environmental costs into the prices of conventional fuels.

Projections of sharp increases in future energy demand add urgency to these issues. The signing of the Climate Convention was a manifestation of an international consensus that carbon emissions from fossil fuel use must be controlled in order to protect the atmosphere.

It is imperative that we develop sustainable energy generation strategies and sustainable systems of water resources management. We have the technological know-how to do both but unfortunately, we still lack the public awareness and the political will to move decisively on these critical issues. A platform for action should look to promoting institutional innovations to bring about integrated approaches to the management of energy and water - a global coalition which would bring together governments, private sector organisations, financial institutions and researchers. The Overseas Development Administration could and should play a catalytic role in this.

This year the un General Assembly will organise a special session to assess the follow-up of Agenda 21 and the Rio Conference. This meeting represents an opportunity to meet the challenges in the field of energy and water. It is my sincere hope that the international community will live up to the expectations.