Trade-off- human rights and the market 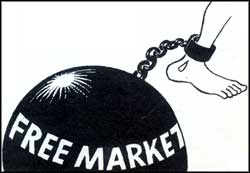 GREEN barriers loom menacingly large on the horizon. On March 28, while addressing the leaders of the G-15 nations, Prime Minister P V Narasimha Rao expressed his apprehensions over the introduction of fresh trade barriers in the garb of non-economic concerns. Then, speaking at the business forum of the G-15 countries on the same day, Pranab Mukherjee, the deputy chairperson of the Planning Commission, hammered home the point with considerably less finesse; he went as far as exhorting the developing countries to foil the North's bid to introduce non-tariff barriers like environment and human rights into the purview of GATT.

Interestingly, on the same Monday, Michael Gadbaw, vice-president of the US multinational General Electric, told Indian journalists that the business community in the US did not favour linking trade with issues like child labour. He held that US companies "would be opposed to using trade as a weapon against anyone". In what came across to many people as a rare appreciation of cultural and social diversity, Gadbaw reassured that "the US business community was aware that local traditions and customs often lead to different labour models".


Gadbaw's views are significant not merely as the stray remarks of a South-sensitive Northern tycoon; the tycoon happens to head the recently-formed India Interest Group (IIG), set up in Washington by some US multinationals with business interests in India. The IIG includes giants like the American Express, Citibank, AT&T, Coca-Cola, IBM and Xerox. Among other things, IIG plans to lobby with the US Congress and the Clinton administration for what Gadbaw called "a more balanced approach" in these matters. At a time when the North is turning on the pressure to link trade with human rights and environment, the IIG statement cannot but come as a relief.

India is not the only country to elicit such a response from American industry. US business has also made it clear that human rights and trade should be kept separate in dealings with China. According to media reports, US industry played a key role in ensuring that trade sanctions against China were lifted. This apparently remarkable stand has caused optimism in those quarters in India that advocate the unbridled liberalisation of the economy.

The Gadbaw statement seems to have reinforced the rationale that the only effective deterrent to the North's designs to link trade with environment and human rights could be a high level of Northern investment in the Third World. The logic goes that that all non-tariff barriers will be resisted by Northern industry itself. The Chinese experience so far shows.


What has motivated Gadbaw and others of his ilk is the business potential in India at a time when most Northern economies are desperate for new markets. The multinational lobby in Europe and the US will perhaps do anything to ensure that the Indian market does not slip away from their grasp. Given the clout of big business, many Northern governments have little choice but to tag along.

But what happens to the not-so-lucrative markets in the developing world? With the rise of popular awareness in the US and Europe of human rights and environmental issues, these governments have to be seen as acting on these issues. Isn't the live-and-let-live policy a convenient strategy to placate the more lucrative markets of countries like India and China and force other smaller countries (read "inconsequential markets") to bear the brunt of Northern initiatives for a better world?

Even in the case of India and China, aren't Gadbaw and company going to ask for their pound of flesh in return for the "favours"? It would be far more desirable for business and citizens' lobbies to use their influence to render this point non-specific, a general rule within GATT, so that powerful partners do not wrench the modalities of trade to suit their own ends.

But a general agreement like this will not suit big business in the North because it provides blanket protection to indigenous business in the developing world. They will see selective exceptions on a bilateral basis as a better alternative: it can be undone whenever the Gadbaws of the world think that those exceptions have outlived their purpose.