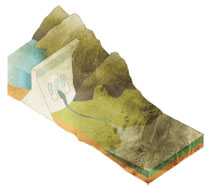 Hydropower is important. But how important? Is it important enough to dry up stretches of our rivers? Or is there a way to balance the need of energy with the imperative of a flowing, healthy river? I have been grappling with these issues for the past few months. But now that the committee (of which I was a member) on the hydropower projects on the Ganga has submitted its report, let me explain how I see the way ahead.

The Ganga in the upper reaches has been an engineer’s playground. The Central Electricity Authority and the Uttarakhand power department have estimated the river’s hydroelectric potential at some 9,000 MW and planned 70-odd projects on its tributaries. Their dreams are gargantuan. In building these projects the key tributaries would be modified—through diversion to tunnels or reservoirs—to such an extent that 80 per cent of the Bhagirathi and 65 per cent of the Alaknanda could be “affected”. As much as 90 per cent of the other smaller tributaries could be “affected” in the same way.

In this way, hydropower would re-engineer the Ganga. It would also dry up the river in many stretches. Most of the proposed projects are run-of-the-river schemes, which are seemingly benevolent as compared to large dams. But only if the project is carefully crafted to ensure that the river remains a river and does not turn into an engineered drain. On the Ganga, many projects were planned and were being built so that one project would divert water from the river, channel it to where energy would be generated and then discharge it back into the river. But the next project would be built even before the river could regain its flow. So, the river would simply dry up over entire stretches. Energy generation was the driver; indeed, the only obsession. The plan was based on using up all the water in the dry season to make energy. The river would have died.

In the committee we discussed various options for ecological flow (e-flow)—why and how much water should be left in the river for needs other than energy. The hydropower engineers argued for 10 per cent e-flow, which they said they could “accommodate” in project design without huge loss of energy generation. The Wildlife Institute of India, commissioned to look at ecosystem and fish biodiversity needs, suggested between 20 per cent and 30 per cent e-flow in different seasons.

I said this was inadequate. In most stretches, the lean flow (from November to April) was less than 10 per cent of the high monsoon flow. Leaving just 30 per cent would mean a trickle. It was not acceptable. I proposed 50 per cent e-flow at all times. But clearly, this was completely and absolutely unacceptable to the other side.

My colleagues at Centre for Science and Environment decided to do some number crunching. The committee had been provided, on repeated requests, hydrological data of 24 constructed and proposed projects. My colleagues took this data and analysed what would be the impact on energy generation and tariff in different e-flow regimes. They found that in the 50 per cent e-flow scenario there was substantial impact on the amount of energy generated and, therefore, on the tariff. But if we modified this a little and provided for a little extra water for energy generation in the high discharge season, but kept the 50 per cent e-flow for the lean season, the results changed dramatically. In this case, the reduction in energy generation was not substantial. Therefore, tariffs were comparable. The reason was simple: the projects actually did not generate much energy in the lean season. The plant load factor, project after project, showed that even in the unrestricted scenario (e-flow of 10 per cent or less) there was no water to make energy in the lean season. We suggested that mimicking river flow was the best way to optimise energy generation. The river had enough to give us but only if we put the river first, our needs next. Based on this, our proposal was to provide 30 per cent e-flow for six months (May to October) and 50 per cent for six months (November to April). But as expected, this analysis did not suit the power interests. IIT-Roorkee, also a member of the committee, was asked to review the analysis.

The games started. IIT-Roorkee, represented by its Alternative Hydro Energy Centre, disputed our conclusions. We asked why? No data was provided on the method of estimation. But hidden in the background sheets provided by IIT-Roorkee was data from two projects of hydrological flow used to disprove our figures. We checked. We found to our shock that figures of flow had been modified; suddenly there was no water in the river in the first place, so a higher e-flow regime would naturally mean lower energy generation. We checked again. We found that even levelised tariff figures had been “changed” from what was provided earlier to the committee.

A round of data contest began. In my next article, I will tell you how the matter was resolved (or not). But let me leave you with this thought: rivers should not be trained; it’s Indian water and hydropower engineers who need re-training.

Hydrology of the upper ganga river

Assessment of environmental flows for the Upper Ganga Basin

The drying up of River Ganga: an issue of common concern to both India and Bangladesh