Travellers on an eco-friendly road

The bus rapid transit (BRT) system is often held as an affordable and sustainable public transport option in rapidly urbanising cities of capital-deficit developing countries like India. However, it seems to be going the way of other worthwhile projects that become “holy cows”. We hesitate to evaluate BRT critically for fears of playing into the hands of the Metro lobby. But as investments in transport infrastructure rise in Indian cities, it is pertinent to assess who gains and who loses as a result of BRT.

We focus on Ahmedabad, the only successful and largest BRT system in the country. With 45 km of rapid transit network, Ahmedabad stands out among the Indian cities that have BRT. The service is becoming increasingly popular among the people of the city. However, there is much scope for improvement in planning, designing and implementing the system. 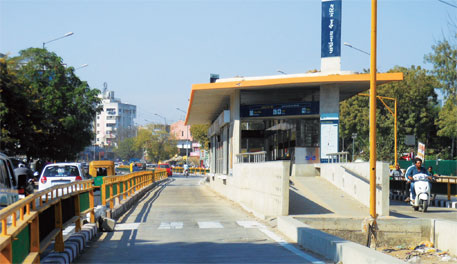 Ahmedabad’s BRT users are largely men (72.5 per cent). Of the total users, just 13.7 per cent belong to households with montly incomes of up to Rs 5,000, which is the official poverty line. In this group, women users are far fewer than men: for every 1,000 male commuters there are only 244 female travellers.

We found that BRT is most popular with people from middle-income groups, with monthly incomes between Rs 10,000 and Rs 40,000. Half of the system’s users belong to this income group. But then, women from middle and high-income households have a minuscule presence in the labour force in prosperous cities like Ahmedabad. They largely use the BRT for social or recreational commuting. The system is popular among people who have regular jobs in the private or public sector. Only 6.1 per cent men BRT users and 3.3 per cent women BRT users are casual labourers.

A very large proportion of the BRT users—about a quarter among the men and two in every five among the women—commute for social purposes. It is quite possible that the system has given a spurt to social and recreational commuting. For example, the BRT connects western Ahmedabad to the recreational facilities at Kankaria Lake in the city’s southeast. The new transport system has made the long-distance recreational facilities more accessible for the middle-class living in the more prosperous areas of western Ahmedabad.

However, only 42 per cent of the BRT users take the system for about 21 days a month, implying that it is still to find regular and sustained ridership. 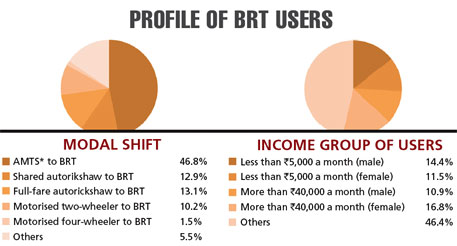 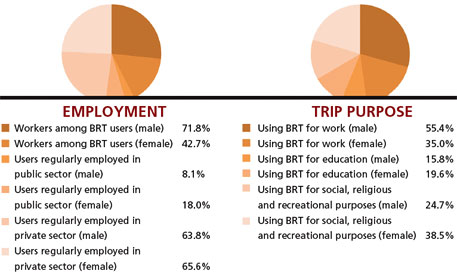 BRT is not just about running bus services on the central verge; it is a comprehensive system, benefitting various users of the public transport, cyclists and pedestrians. But most of Ahmedabad’s operational BRT corridors are on roads 30 metres or more in width, and maximum road space has been left for the mixed traffic, sometimes at the cost of cycle tracks and footpaths. Non-motorised transport infrastructure has not been given the due attention that was promised and claimed in detailed project reports.

Paid parking policy has also not been implemented along BRT. Integrating the BRT system with regular municipal bus services is another unaddressed concern, and currently there is no plan for integration.

Lastly, the social impacts of the project, such as rehabilitation of people displaced by the development of the corridors, have not been addressed. The system is not yet popular among people from lower income groups, and the causes for this need investigation. Attracting private vehicle owners to public transport remains a challenge as well. If Ahmedabad’s BRT has to remain a “best practice” it has to widen its social reach and attract more users from private motor vehicles. It has to develop well-designed footpaths and cycle tracks, implement paid parking regime and effectively integrate all systems of buses in the city.

Darshini Mahadevia is a professor and Rutul Joshi is an assistant professor in the Faculty of Planning and Public Policy at CEPT University, Ahmedabad. Both are founding members of Centre for Urban Equity (CUE) at the university. Abhijit Datey is senior research associate at CUE. The views expressed here are that of the authors and not of their institution