During a recent visit to Arunachal Pradesh, we were staying on the edge of the Sessa Orchid Wildlife Sanctuary. The small 100 sq km sanctuary in West Kameng district is well-known for its orchids. The Indian Army uses Sessa as a transit check post and hence there are a fair number of army personnel in the area.

As we were conducting faunal surveys in the area, which involved both diurnal and nocturnal forays into the forest, we were wise enough to inform the local army commanding officer about our intentions. That, of course, did not prevent us from encountering the men in green.

At the very start of our faunal survey, on the edge of the forest, close to the army barracks, I noticed a small green creature sitting on a leaf. A closer examination revealed that the creature was a juvenile frog. My son, Yash, who was with me, queried, “Dad, how did you spot it? It is so well camouflaged.” 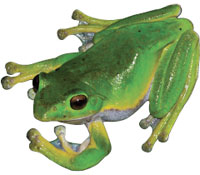 Yash was right. Even though it was broad daylight, the juvenile frogs sitting crouched on the upper surface of leaves were almost invisible to the human eye, and to predators as well. We stopped and looked a little more closely. There were almost 20 juvenile frogs in the area. When I decided to photograph them, the first thing I experienced was stinging nettle. All the juveniles were sitting on the leaves of nettle. Not only were they well-camouflaged, they had additional natural protection of prickly nettle. The juveniles were no more than a couple of inches long and still had their dark tadpole-like tails, which they would outgrow over the next few days.

Having seen the juveniles, that night we decided to search for adult frogs. Given the frog’s appearance, colour and location, I deduced that they were juveniles of a tree frog. Tree frogs typically live in trees and bushes rather than on the ground. We spent an hour looking for adult frogs. Finally, I spotted a large green frog sitting on a banana leaf—we had located the adult tree frog! Sitting a metre above the ground, the tree frog was bright green, with prominent yellow lines along its flanks. I immediately recognised it to be the Large tree frog (Rhacophorus maximus), which is an uncommon resident of the forests of northeastern India.

As Yash and I excitedly took a closer look at the tree frog, a shadow loomed over us. Our nocturnal activities had attracted attention. Shining torches, large bags on our backs, wandering around in the forest at night—that was enough to raise hackles of the Indian Army. We were accosted by three burly jawans, resplendent in their green uniforms, sternly asking us what we were up to. A long winded explanation followed, including the fact that I had met their commanding officer.

None of this cut much ice, until I showed the jawans the tree frog and the juveniles; that got them intrigued. “Hamne to ye kabhi nahi dekha hai (we have never seen this),” they said. Well, I said, you have never looked.

I followed this through with a small talk about the frog’s natural history, which got them hooked. What followed was amusing. As I waded through stinging nettles to get closer to the frog, the jawans of the Indian army gave me encouragement and free advice on how best to photograph the frog.

Sanjay Sondhi is with conservation organisation Titli Trust in Dehradun. Feedback on this column is welcome at sanjay.sondhi1@gmail.com