While the name “Hudhud” comes from a beautiful bird found in Afro-Eurasia, it will definitely not be a good omen for Odisha and Andhra Pradesh this weekend. As explained here, the activity in the second half of the cyclone season has begun with a bang. Tropical storm (TS) Hudhud has started its journey towards the eastern coast of the Indian mainland. On Tuesday night, this system crossed the Andaman and Nicobar Islands with anticipated peak winds of about 55 km/hr.

At this point, the system is like a wild animal waiting to be released from its cage. TS Hudhud will also turn “wild” when it crosses the Andaman and Nicobar Islands and encounters very warm sea water over the Bay of Bengal (BOB). Along with other favourable factors, a low pressure like this needs fresh supply of warm moist air from the sea to keep it going. 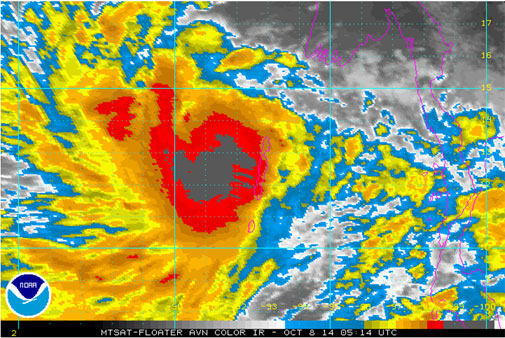 How severe will this weather event be?

Located at 12.2N, 93.0E (near the Long Islands) this morning, TS Hudhud now has peak surface winds of about 65 km/hr (gusting to about 80 km/hr) as per the Joint Typhoon Warning Centre (JTWC) of the US, located in Hawaii. It has moved west-northwestwards in the past few hours. Initial estimates from Global Forecast System (GFS) weather model, India Meteorological Department (IMD) and JTWC are out. JTWC estimates that this system will intensify into a Category 1-2 cyclone (during its peak) and make a landfall near the Andhra Pradesh-Odisha border in the early hours of October 12, 2014. IMD expects peak winds of 130-140 km/hr in the evening hours of October 11, which would also place Hudhud in Category 1 of cyclones on the Saffir Simpson scale .

The models and the agencies had made similar forecasts for Cyclone Phailin last year. Initially, weather models were expecting only a Category 1-2 cyclone, but it went on intensifying rapidly on October 10, jumping to almost Category 3-4 in a single day. Such intensification is called “rapid intensification” of a low pressure and it happens when practically none of the factors (which inhibit the development of cyclone) are present.

According to the Cooperative Institute of Meteorological Satellite Studies (CIMSS), Bay of Bengal is warmer now than it was during Phailin. Sea surface temperature around the system is 29°C and the system will be moving over warmer water. For any low pressure system to strengthen, there must be strong converging winds at its base so that the clouds remain gripped and the system intensifies. Higher the magnitude of these winds, stronger is the system that develops. To top it all, winds should be moving away from the system so that the warm moist air which is rising from the bottom can flow out of the system and on the way, condense into clouds. This is a standard thermodynamic engine which requires low vertical wind shears (VWS is the difference in the wind speed/direction over short distance in the atmosphere), as stronger VWS can blow the system away.

The fate of TS Hudhud rests on how strong these VWS become on its path. As of now, they are moderate (15-20 knot). I don’t foresee them as getting strong enough to inhibit intensification beyond Category 1 and hence, one has to closely monitor the situation before declaring the possible intensity. As of now, let us stick to what the models are saying.

Here is what to expect if you are located in these areas: