Most people in India probably think that tuberculosis (TB) is an old disease with little or no relevance to them in 2013. But, in fact, India reports over two million TB cases every year. TB kills nearly 280,000 men, women and children and is one of the leading causes of death in India.

A 2012 Global TB Report by the World Health Organization estimated that approximately 66,000 cases of MDR-TB emerge annually from the notified cases of pulmonary TB in India. Since the private sector in India does not routinely report all TB cases, the true figure may be higher, especially in urban hot spots.

Drug-resistance is generated by mismanagement of TB. If the treatment of people with TB is incorrect, interrupted or not completed, the TB bacteria can become resistant to drugs. Drug resistance can emerge when doctors prescribe the wrong treatment, the incorrect dose, or length of time for taking the drugs. MDR-TB requires extensive treatment (at least two years) with multiple, toxic, expensive drugs and outcomes are poor. So, prevention of MDR-TB must be a big priority.

Patients in India often seek medical care in the private sector, and this includes unqualified practitioners, chemists, and local healers. By the time patients begin TB treatment in the public sector, it may be too late to prevent transmission of TB in the community. This is why engagement of the vast private sector is quite critical.

Research studies have shown that India’s private sector is a source of mismanagement of TB and hence, drug resistance. This includes the use of incorrect diagnostics, incorrect drug combinations and lack of supervision to ensure all TB patients complete treatment. The RNTCP needs to evolve an inclusive business model to engage the Indian private sector to ensure better quality of TB care.

India's TB control program also needs to improve its quality of care for patients with MDR-TB. Currently, most patients in the public sector do not get tested for drug-resistance, unless they do not improve with a full course of TB treatment. The programme needs to urgently scale-up access to adequate drug-susceptibility testing and second-line drug treatment. New, fast and WHO-approved molecular tests can now give drug-susceptibility results within hours and such technologies need to be scaled-up.

What can patients do to prevent drug-resistant TB? To begin with, all individuals with cough for more than two weeks must get their sputum tested for TB. Sputum testing is available free via thousands of designated microscopy centres run by RNTCP. If patients seek care in the private sector, they must demand sputum testing over blood tests for TB. For extra-pulmonary TB, specimens must be collected from the site of the disease (lymph node biopsy, for example). Blood is not the appropriate sample for extra-pulmonary or pulmonary disease.

If TB is diagnosed, the most important thing a person can do to prevent drug-resistance is to take TB medications exactly as prescribed. No doses should be missed and treatment should not be stopped early. Patients who cannot afford to buy drugs must seek treatment in the public sector where TB drugs are given free. The Indian government is currently considering a plan to offer free TB drugs to patients treated in the private sector as well.

Doctors, healthcare providers, pharmacies, and laboratories have a critical role to play in preventing MDR-TB. They must ensure quick and accurate diagnosis, follow recommended treatment guidelines, monitor patients’ response to treatment, and make sure therapy is completed; this is the key to prevention. If TB is confirmed, they should start treatment promptly and follow the Indian Standards of TB Care.

Similarly, laboratories should stop the use of inaccurate diagnostics for TB. The government recently banned the use of antibody blood tests for diagnosing TB and published advertisements in leading newspapers (see image). Other blood tests such as “TB-Gold” are not meant to diagnose active TB. They are meant to detect latent TB infection and one in three Indians are latently infected. So, doctors should be cautious about using such blood tests to start treatment for active TB (pulmonary or extra-pulmonary). 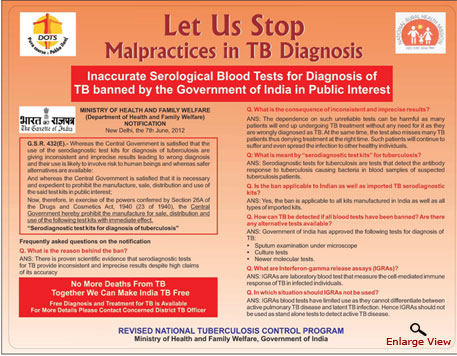 The Indian drug market is unregulated, and pharmacies and drug stores often dispense TB drugs without a valid doctor’s prescription. Indeed, almost all antibiotics are freely available over-the-counter. Recently, the US Food and Drug Administration approved Bedaquiline, the first new TB drug in over 40 years. However, before any new TB drug enters the Indian market, mechanisms must be put in place to ensure that they do not get abused and used indiscriminately for all sorts of infections. We just cannot afford to lose new TB drugs to drug-resistance.

Madhukar Pai is professor at McGill University in Montreal, Canada and can be reached at madhukar.pai@mcgill.ca