The 123 nuclear agreement between India and the us draws its name from an article of the us Atomic Energy Act. It is somewhat coincidental that three reasons are also being listed to justify the deal, or to debunk it. Supporters and critics have hitched their arguments to the deal's foreign policy aspects , its likely effects on the country's nuclear weapons programme and its potential economic benefits--or ills. Very few seem to be going beyond these three reasons in questioning the wisdom of using nuclear power to meet the country's energy needs.

It is intriguing that there was no debate in the country on nuclear power before negotiations on the deal began with the us. Who decided that we desperately need nuclear energy? Did we have any data to back our decision? Surely, one would not expect the scientific community to be oblivious to the hazards of nuclear energy? And then, what about environmentalists? Why has no one criticized the deal on environmental grounds?

The threat of a nuclear war horrifies all. But the prospect of electricity from nuclear energy blinkers us to the hazards of such energy. We forget that a nuclear power plant could be as lethal as a nuclear bomb in spilling out radiation It seems that we have forgotten the Chernobyl disaster in Russia, a little over 20 years ago. Many have of course justified the nuclear argument on economic grounds. But have they factored the vulnerability of nuclear plants to disasters in their calculations?

One of our biggest urban problems is solid waste management. It is bad enough trying to take out the garbage we generate in our kitchens and offices and finding disposal solutions for them. What are we going to do with nuclear waste? 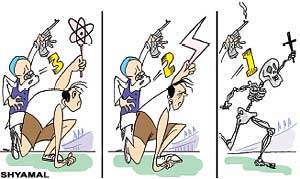 A lot of the radiation from nuclear waste will continue for ever. Have we found ways to deal with them? Have we even debated the problem of nuclear waste?

Till some time ago it was thought that nuclear waste could be dumped into our oceans and seas. But now it is known that radioactive substances are absorbed into deep sea marine life and find their way back through the food chain to human beings.

And then what about the possibility of accidents when waste is transferred from the nuclear plant to the sea? The 123 agreement does not even address the issue of nuclear waste, having been hatched in the rarefied atmosphere of diplomacy.

Yes, that's what nuclear power plants are to use a term deployed by the thinker, E F Schumacher. Scientific discussion on the nuclear plant's useful life generally centres on a triviality: whether a plant has a service life of 20 or 30 years. The fact that a nuclear plant cannot be dismantled, taken away and sold as scrap is not understood. The fact that they would be left standing for several centuries as testimony to our folly, leaking radioactivity into the air, soil and water to contaminate and destroy our habitat and us is too embarrassing to be publicly acknowledged or discussed.

But then economic growth is the current Holy Grail. Comparisons of our growth rates with China or the Asian Tigers, our escape from what was once derisively referred to as the Hindu Rate of Growth, our catching up with developed countries and even surpassing them provides grist to the patriotic mill.

Energy to sustain and push economic growth to higher levels could only come from nuclear power, is the oft-propounded refrain. Proponents of nuclear power often hold up this form of energy as the solution to a lot of of our climate change problems. It's cleaner than fossil fuels, they claim. But isn't it high time that we promote other alternatives to fossil fuels such as solar and wind energy.

Of what use would be nuclear power-driven growth, if it leaves grotesquely defective human mutants in its wake?

Mathew Thomas is a former army officer and a defence scientist. His email address is mathew.111938@gmail.com