It may not be long before the city gets a tag of being ‘unlivable’, with its environmental indicators showing a deep and steady decline 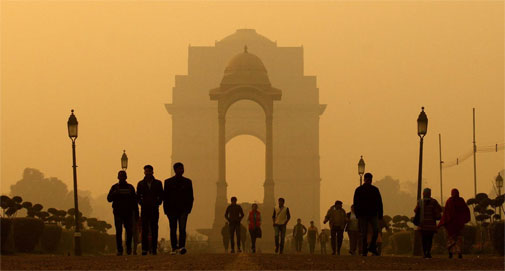 It may not be long before the city gets a tag of being ‘unlivable’, with its environmental indicators showing a deep and steady decline

It is again election time in Delhi and different political parties are vying with one another to wrest its control.The three key contestants—namely the Indian National Congress (INC), the Bharatiya Janata Party (BJP) and the still newbie Aam Aadmi Party (AAP)—while indulging in intense and sometimes acrimonious campaigns have released their election manifestoes but“with a difference”!

While AAP has the most detailed 70 pointer manifesto, the BJP has released only a 'Vision' document. The INC perhaps in a first of its kind move has come out with not one but two manifestoes. Would all this fuss result in an environmentally-secure Delhi?

City-state of Delhi is multi-hued. Some could even call it a strange and rare animal. Let me explain.

Additionally, it has a state government, which has little statutory control over its land, its planning and its police. The current election process is to elect members to the 70 seats of this state’s legislative assembly.

With such complex administrative structure, it is little wonder that the city-state of Delhi, with a human population exceeding at the last count 16 million, has become an almost unmanageable mega polis. It may not be long before the city gets the tag of being unlivable, with its natural environmental indicators showing a deep and steady decline. Let us look at them.

One state, many worries

It has been known for long that the 22 km urban stretch of river Yamuna in Delhi has the dubious distinction of being the most threatened stretch of any river in the country, perhaps even the world. This is when more than Rs 1,500 crore have already been spent since 1994 to “clean” it under the Yamuna Action Plan. Recently the National Green Tribunal (NGT) in a landmark judgement on January 13, 2015 has set a fresh roadmap with a 2017 deadline for its rejuvenation under a scheme called Maily se Nirmal (from spoiled to wholesome) Yamuna, rejuvenation project, 2017.

Thanks to a 1990s CSE-led campaign, the air quality in Delhi had seen a marked improvement following a court monitored diesel to CNG makeover of all its public and commercial transportation.

But 1990s also saw, thanks to newly “opened” market forces, a steep rise in the number of private and public vehicles on the road in the city so much so that today with around 8 million four wheelers and an annual growth rate of some eight to nine per cent, Delhi claims to possess the highest number and density of cars in any city in the country. Result is that despite the iconic Delhi Metro marking its presence at almost all parts of the city, the air quality in the city has deteriorated yet again to the notorious early 1990s levels and even beyond. Unsustainable number of four wheelers in the city has also catapulted ‘parking’ from being one of little concern in 1990s to perhaps number one “space” as well as "law and order" issue in the city.

Delhi ridge, as the last leg of the Aravali range provides more than an undulating topography to the city. It has been and remains the city’s biggest defense against the forces of aridity and desertification that reigns supreme on its west. But the city is ever ready to gnaw onto its vitals.

The city of Delhi has seen its slumisation and mushrooming of unauthorised human habitations like no one’s business and the politics of vote has not helped matters. Some 400 villages made the city of Delhi and owned large tracts here. Today many are islands of squalor and discomfort.

So what is it that any future “ruler” of Delhi is up against in terms of environmental challenges?

An almost dead “lifeline” river; air that one can inhale at one’s own risk; a ridge viewed more as a piece of real estate; plethora of agencies with different masters and often working at cross purposes; parking of vehicles and road space for pedestrians an intractable civic issue and villages, slums and unauthorised settlements crying out for basic civic amenities like housing, sanitation, water, transportation, electricity and health facilities. Not a nice picture?

Unfortunately the before mentioned political manifestoes/visions touch these issues perfunctorily if at all.But would Delhi’s next CM prove himself/herself upto the task?

Manoj Misra is the Convener of Yamuna JiyeAbhiyaan