Although non-governmental organisations have come of age, apprehensions about their work persist 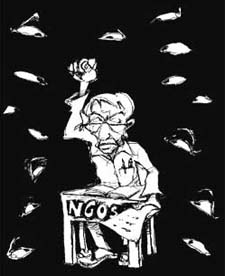 " we want the captive orcas (killer whales) to be free. However, we don't want to oppose the government which has approved catching orcas. We also do not want to oppose the aquariums which bought and kept them. Even sending protest letters is wrong. Such activities are too radical."

You may wonder, then, how will they be able to set the orcas free. Even I don't understand whether they are serious about educating the public to share their views that orcas should not be kept in dolphin parks. Three orcas which were captured in February 1996 still survive. Two have died already.

I don't know why the decision by the authorities to allow five orcas to be kept in an aquarium for "scientific purposes" was not opposed. It seems a rather typical Japanese way of thinking.

Making an "unnecessary departure" from social trends is wrong behaviour. It does not matter whether you are right or wrong.Whether you are "right" or not depends on how "society" feels. Further, how "society" feels often depends on how the superiors and authorities, like directors of state agencies, and national and local government officials respond.

If the majority of the people do not know an issue, raising a question on that issue is "unnecessary". Let others, the authorities in most cases, decide what should be done. "Normal" people should follow what they have decided. This is the common way of thinking. Even after a host of frauds by politicians, companies, and the media, many people continue to trust the authorities. They do not raise questions, investigate, or judge by themselves.

Many of the ngos, therefore, face problems. For the public, they are a group making strange claims. ngos which are against government policy are seen as extremists and many people try to keep away from them.

Even after the ngos get recognition, people try to find faults with their method of campaigning. They think little about the cause of their struggle. People do not associate themselves with the cause of the ngos until they find the ngos to be perfect as far as the organisational structure and logic are concerned. Even the ngo community behaves in a similar way. Some of the ngos involved in environmental conservation work are unhappy with the animal protection work done by conservation groups. Some of them even attack animal groups in public.

Last year, when I delivered a lecture on ngos and their activities at a university, I asked some 50 students in the room if they knew any of the major Japanese conservation ngos. More than 90 per cent of them knew one or more names. Next, when I asked if any of them was a member of any ngo , only two students raised their hands. I asked a few more questions to find out how the students felt about ngos that are well-established. When I asked, how many of them felt that ngos are suspicious in general, about 80 per cent of them raised their hands. With a little shock, I tried to figure out how did such a feeling originate. I gathered that it was not from any first hand experience. May be this was the impression made on their minds by the media.

Needless to say, ngos which resort to action, even non-violent ones, are dubbed as too radical or extremist. I was shocked when I heard a woman, who had signed a petition to protect a wetland, say, "I have never involved myself in such a radical action before. "

I did not realise that there is a big gap between the ngos and "common" people in society, and also do not have an answer as to how ngos should approach the vast majority of public which must share the same feeling about their "radical" activities.

However, things are changing slowly. Fifteen years ago if you were working on something against government policy, for example, whaling, you would be told that you are a betrayer of the nation. Now, ngos are at least recognised as a necessary part of society.

I do feel that the ngos' progress is slow, but they have to continue working with the hope that some day society will change, we will have democracy in the real sense and be there in time to save this planet.

Naoko Funahashi is a freelance writer based in Japan