Union budget 2015: Children left asking for their dues, as ever 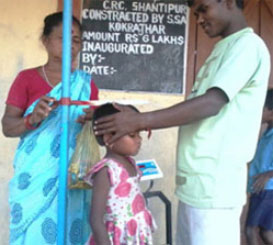 General trends in public expenditure on children indicate the priority accorded to children in public policy. Given the significant deficits in various development indicators regarding children, it is imperative that the government allocate sufficiently for various programmes and schemes earmarked for children. However, total resources earmarked for children (child budget, henceforth) in the Union budget shows a gloomy picture.

Total child budget as percentage of Gross Domestic Product (GDP) has gradually declined since 2011-12 and in the 2015-16 budget, it stands at only 0.41 per cent. Put in simpler terms, only 0.41 per cent of GDP has been earmarked for children who constitute more than 40 per cent of population of India, as compared to 0.63 per cent of GDP in 2014-15. Similarly, total child budget as percentage of total Union budget shows a declining trend since 2012-13 and it stands at a paltry 3.26 per cent in the Union budget 2015-16. 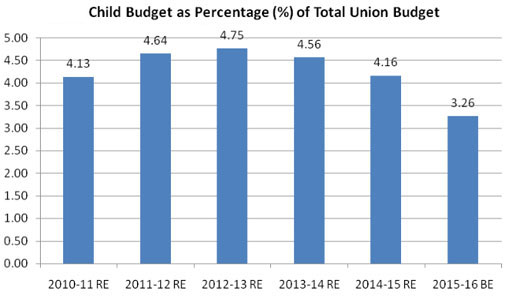 Within the total child budget in 2015-16 (budget estimates or BE), child education receives 79.0 per cent, followed by child development with a share of 15.2 per cent. Child health and child protection get a share of only 3.9 per cent and 1.8 per cent. Compared to the previous year, the total resources earmarked for children became more skewed in favour of education. There is decline only in child development (15.2 per cent) as the other two sectors—child health and child protection—now get higher share of the child budget compared to the previous year.

It is worrisome that the allocation for Integrated Child Development Scheme (ICDS) has declined from Rs 18,195 crore in 2014-15 (BE) to Rs 8,335.77 crore in 2015-16 (BE). On Integrated Child Protection Scheme (ICPS), the allocation has increased by only Rs 2.23 crore compared to the previous budget. Similarly, massive cuts have been announced in Sarva Shiksha Abhiyan (Rs 22,000 crore from Rs 27,758 crore, BE, in 2014-15) and mid day meal scheme (Rs 9,236 crore as against Rs 13,215 crore, BE, in 2014-15). The fine print also shows key schemes announced last year are missing. Details of these schemes were expected in the current budget, including the National Programme on Malnutrition, and the teacher’s training initiative, both of which showed negligible spending in the previous year.

Additionally, the finance minister expects that some additional tax resources could be generated in this fiscal year. If that happens, some additional amount of Rs 1,500 crore and Rs 500 crore could be allocated for ICDS and ICPS respectively. But this is totally uncertain and depends on how the economy behaves in the coming fiscal year.

The change in scenario has been explained as a consequence of the higher devolution of Union taxes to state, as recommended by the 14th Finance Commission (FFC). Accordingly, plan outlay of the Union budget has declined on the whole. If children are to be unaffected by this devolution to states, there has to be an equal priority that states have to allocate to children’s requirements, and essentially match the Central share component-wise as per earlier budgets. Only then would the total resources available for the schemes for the welfare of children remain unaffected.

In such a scenario, an estimation of the contribution towards children’s share would be dependent on further scrutiny of the state budgets, which will show exactly how much matching contribution is given by the states from their respective budgets for various child-related programmes where there have been substantial cuts in the Union budget.

As a child rights organisation working across 23 states of India, my NGO, Child Rights and You, hopes that state governments will continue to prioritise the share of children in their respective budgets and that this shift from the Centre to state financing of essential schemes related to education, health, and protection of children will not adversely affect the survival and development of children overall.

Komal Ganotra is Director, Policy Research & Advocacy, with Child Rights and You (CRY). CRY and its parners are currently working with 2 million underprivileged children, parents and communities in 23 states