US plays dirty on tar sands 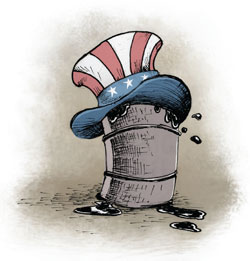 That big countries arm-twist smaller countries seldom occasions surprise; it is simply the norm in trade deals. The big guys invariably succeed in getting their way because it is they who fix the rules of the game—rules that are pushed by powerful corporate interests in their countries. That’s how we have a World Trade Organization with unfair and lopsided rules weighted against developing countries. A Burkina Faso or Chad cannot really expect a just deal when pitted against the US.

But now it appears that the big, too, can come under pressure and in blatant ways. At the receiving end is the EU, a group of 28 nations that is the world’s largest trading bloc. Weighty as it is, the Goliath hasn’t been able to fight off the pressure from Canada and Big Oil on keeping out a particularly heavy fuel obtained from tar sands, all thanks to the US which has backed them in lobbying against an EU policy to fight global warming. The nub of the dispute is the EU’s fuel quality directive, or FQD, which aims to cut greenhouse gas (GHG) emissions from fuel by six per cent by 2020. One of the ways it hoped to achieve this goal was by designating oil from tar sands as 25 per cent more polluting than conventional oil because of higher GHG emissions. Oil from tar sands comes mostly from Canada.

So what was the Obama Administration doing in this dirty fight? It transpires that Washington was quietly putting the screws on its biggest trading partner in the ongoing negotiations between the two on the Transatlantic Trade and Investment Partnership (TTIP). TTIP aims to create the world’s largest free trade zone but negotiations have been held in the tightest of secrecy, away from any public involvement or debate.

But thanks to documents unearthed by Friends of the Earth, a policy watchdog, Washington’s role in pressuring the EU on FQD has come out into the open. Predictably, the US government was backing big business rather than an EU policy that would reduce climate change vulnerabilities. An analyst with Friends of the Earth was quoted by IPS news agency as saying that US officials were lobbying against the EU fuel directive “in a way that reflects the interests of Chevron, ExxonMobil and others”.

No surprises here, really. But why did the EU cave in following American pressure and agree to loosen its regulations on fuel emissions? News reports say Brussels has agreed to the US push for a median calculation, that is, an average of fuel-emissions calculations instead of insisting on suppliers divulging the carbon footprint of the oil used in their product. That would make tar sands, described by environmentalists as an exceptionally dirty fuel, literally blend into the background.

Thankfully, there is a chance, slender however, that the EU’s pusillanimity and the US’ complicity in the dirty deal will not go unchallenged. A clutch of US Congressmen and women are once again questioning the role of US trade officials in getting FQD watered down. The lawmakers say they are concerned that trade and investment rules are being used to “undermine or threaten important climate policies of other nations” and that it would be inconsistent with the goals expressed in Obama’s Climate Action Plan.

The EU boasts about openness of its trade regime and the “tremendous leverage” it enjoys in talks with its partners because of its size. Such a pity that both factors vanished so quickly in the puff of black smoke released by tar sands. Or is there a quid pro quo in the TTIP that we will learn of much later?