USA faces up to the biodiversity challenge

The US President reiterates that the one world, one environment theme is the only way to protect the planet. 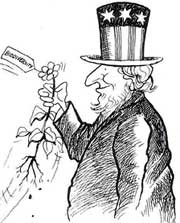 IN AN ERA of global economics, global epidemics and global environmental hazards, a central challenge of our time is to promote our national interest in the context of its connection with the rest of the world. We share our atmosphere, our planet, our destiny with all the peoples of this world. And the policies I outline today will protect all of us because that is the only way we can protect any of us.

Our economic plan will create new job opportunities and new business opportunities, protecting our natural environment. The reductions in the interest rates, which we have seen already, will free up tens of billions of dollars for responsible investments in this year alone.

Though it has been hardly noticed, the jobs package I have asked the Congress to pass actually contains green jobs from waste water treatment to energy efficiency, to the restoration of our national parks, to investments in new technologies designed to create the means by which we can solve the problems of the future and create more jobs for Americans. Our long-term strategy invests more in pollution prevention, energy efficiency and solar energy, in renewable energy and environmental restoration, and water treatment.
Last year, the nations of the world came together at the Earth Summit in Rio to try and find a way to protect the miraculous diversity of plant and animal life all across the planet. The Biodiversity Treaty that resulted had some flaws and we all knew that. But, instead of fixing them, the US walked away from the treaty. That left us out of a treaty that is critically important not only to our future but to the future of the world. And not only because of what it will do to preserve species but because of opportunities it offers for companies whose research creates new medicines, new products and new jobs.

Just one recent example makes the point. A tree that was thought to have no value, the Pacific yew, used to be bulldozed and burned. We now know that the tree contains one of the most promising potential cures for ovarian cancer, breast cancer and some other forms of cancer. We cannot walk away from challenges like those presented by the Biodiversity Treaty.

Our administration has worked with business and environmental groups towards an agreement that protects both American interests and the world environment. And today, I am proud to announce USA's intention to sign the Biodiversity Treaty.

This is an example of what you can do by bringing business persons and environmentalists together, instead of pitting them against each other. We can move forward to protect critical natural resources and critical technologies. I have directed the State Department to move ahead with our talks with countries that have signed the convention, so that the US can move as quickly as possible toward ratification.

To learn more about where we stand in protecting all our biological resources here at home, I have asked the Interior Department to create a national biological survey to help us protect endangered species and, just as importantly, to help the agricultural and biotechnical industries of our country identify new sources of food, fibre and medication.
Today, I reaffirm my personal commitment and announce our nation's commitment to reducing our emissions of greenhouse gases to their 1990 levels by 2000. I have instructed the administration to produce a cost-effective plan by August that can continue the trend of reduced emissions.

It is time the US government begins to live under the laws it makes for other people. With this executive order, I ask all federal facilities to set a voluntary goal to reducing their release of toxic pollutants by 50 per cent by 1999. This will reduce toxic releases, control costs associated with clean ups, and promote clean technologies.

And it will help make our government what it should be -- a positive example for others. Poor neighbourhoods in our cities suffer most often from toxic pollution. Cleaning up the toxic wastes will create new jobs in these neighbourhoods for those people who live there and make them safer places to live, work and to do business.

Today, I am also signing an executive order that directs federal agencies to make preliminary changes in their purchasing policies, to use fewer substances harmful to the ozone layer.

Excerpted from US President Bill Clinton's speech on the eve of Earth Day, 1993.