Vacancy for a FALL GUY 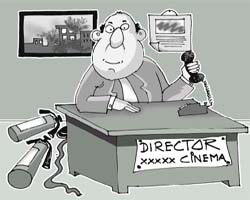 the bailbondsman is a unique feature of the American judiciary. If a person has been held on bail for, say, us $5,000, then the bailbondsman will stand surety (for a fee, of course) until the case comes up for trail. If, however, the accused jumps bail, then the bailbondsman will have to give chase with a pair of handcuffs to bring the fugitive back to justice. Normally ex-cops or detectives become bailbondsman. In the Star Plus serial, The Fall Guy , tv actor Lee Majors portrayed a stuntman who also acted as a bailbondsman to meet expenses. Then there is that early 40s movie, The Maltese Falcon , in which Humphrey Bogart tells Mary Astor that he does not want to be a fall guy.

I did not imagine that I was close to being one when I responded to that ad for a board level appointment relating to industrial safety. Months passed, and then one afternoon the phone rang. Through a mouthful of toothpaste foam (I get up late), I mumbled hello. The voice at the other end said that the director personnel would like to have a chat with me. It is difficult to talk with a mouthful of toothpaste, but I managed to reply in the affirmative. I searched in vain for the far (Fatal Accident Ratio) of Indian Industries, listed the priorities while assuming risks, checked the mtbf (Mean Time Between Failures) of safety equipment abroad, went through the steps suggested for improvement of stress-related performance -- I need not have bothered, the chat was on a different level altogether.

Giving brief details of their plants, the director personnel went on to state that the people running those plants do not know much about safety. Hence, they would not be held responsible if anything went wrong. In view of this, they are looking for someone who could take charge.

Three things flashed through my mind at once. I remembered the landmark judgement of the highest court of the country stating that if accidents occur due to safety violations, the owner of the factory would be held responsible. I silently thanked the intrepid lawyer whose relentless fights against safety violators have made the culprits behave like frightened chickens. And I felt like saying that scapegoats are available aplenty near Jama Masjid, especially during Bakr-Id. However, I decided to play along and said I agreed. As regards the price, I said I would inform later.

After some time, there was a picture in the press showing the functionaries of a mini-gas chamber -- also doubling up as a Delhi cinema hall -- in which 60 people perished due to asphyxiation. I then realised how close I had come to attaining instant fame and a berth at the Delhi State Hospitality Centre at Tihar Jail, had I joined as the accidental director of those Jerry-built plants.

The author is an industrial safety consultant based in Delhi