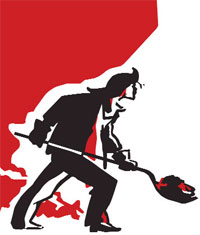 Who has heard of Eklehara village? I would wager that not many besides the 9,000-odd people who live there. It’s just one of the 96 villages in Parasia block (tehsil) of Chhindwara district of Madhya Pradesh that are very likely hard to distinguish one from the other except for the fact that many of these abut the mines of Western Coalfields. These mines are said to have been in operation for two decades, perhaps longer. And yet, unknown and unheard of, Eklehara has earned a spot in the limelight and a place in the records of biological conservation debates.

In June this year, the Eklehara Biodiversity Management Committee (BMC) staked its claim for a share of benefits accruing to the public sector giant from mining coal found in their vicinity. This claim was made before a National Green Tribunal (NGT) Bench at Bhopal and was, depending on how one viewed it, original and daring or rather foolhardy. Access and benefit-sharing (ABS) is one of the cardinal pillars on which the law on conserving biodiversity rests, and the Eklehara BMC was making it clear with its trailblazing petition that it takes very seriously India’s Biological Diversity Act, 2002, which mandates the fair and equitable sharing of benefits arising from the commercial utilisation of bio-resources.

Two points make this an unusual case. One, of course, coal had not been seen as a biological resource till then. It was in April 2013 that one resourceful state biodiversity board (SBB) had the brainwave of classifying it as such and thus seeking a share of the profits made by Western Coalfields from mining it. That was the Madhya Pradesh SBB. Its well reasoned arguments on this score have thrown both the National Biodiversity Authority (NBA), which administers the law on biodiversity, and its parent body, the Ministry of Environment and Forests (MoEF), into a legal tizzy.

The other point is that it marks the coming of age of BMCs. Considered the lowliest link in the regulatory hierarchy on biodiversity conservation, the grassroots committees had not mattered. At least till then. Just as the various states reflect the patchy and unpredictable levels of development in the country, the BMCs, constituted at the panchayat level, mirror hugely contrasting levels of readiness and competence to tackle something as complex as biological conservation.

If SBBs were of little significance, how could BMCs, composed mainly of not-so-lettered village folk even if rich in traditional knowledge, be of any account? In August and September last year as Down To Earth was researching the functioning of the three-tier system (see ‘Protect & Profit’, Down To Earth, October 1-15, 2012), it found a far from encouraging report card. BMCs hardly performed and on ABS, none had been consulted. Access has been granted by the higher echelons, while benefit-sharing was almost entirely missing from the picture.

Madhya Pradesh’s example, however, demonstrates that MoEF and NBA can no longer be lackadaisical. Coal-as-a-bio-resource is a googly that has caught them on the chin, the first of the many tough questions on benefit-sharing that are likely to follow.

And challenges are coming quickly and more aggressively. In another case before it, NGT has ordered Som Distilleries to provide the information sought by the MPSBB, making these two cases the first to be heard by the green tribunal. What it means is that the company, which had earlier chosen to ignore the board’s case filed against it in the court of the chief judicial magistrate of Bhopal, cannot afford to be disdainful of a biodiversity board any longer. If an SBB wants to know what items defined as bio-resources are being used by any company, it would jolly well have to disclose the information.

Can there be a better way of protecting natural resources than by giving communities a sense of ownership of these? The global treaty on protecting biological resources, the Convention on Biodiversity, lists dozens of such cases but mostly in other parts of the world. At one time, India had an enviable practice of local communities safeguarding their trove of biodiversity but progress has destroyed much of this tradition.

Newer laws such as the Forest Rights Act are sometimes helpful in letting communities decide how to use their biodiversity. The recent vote by villages in the Niyamgiri area of Odisha on the issue of bauxite mining is an example. Kerala, meanwhile, is setting the benchmark with an expert panel recommending that fresh licences for destructive operations such as quarrying be given environmental clearance only on the condition that the licencee gives one per cent of its profit to the biodiversity fund of the local panchayat. Hopefully, this may soon become the rule.

With funds and knowledge at their command, BMCs could eventually become a force to reckon with as vigilant guardians of biodiversity, granted they take conservation as seriously as they do its benefits.