Why are the dispossessed accused of undermining the nation when it is crooked politicians, businessmen who are destroying it?

Why are the dispossessed accused of undermining the nation when it is crooked politicians, businessmen who are destroying it? 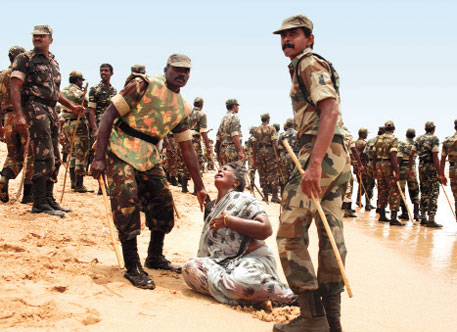 The Indian state’s predilection for slapping serious charges on people who question, criticise or object to policies and projects is becoming so routine that it occasions little surprise these days. Usually, it is a charge of sedition or sometimes of waging war against the state, both of which can put you behind bars for life. So egregious are the cases that there is public outrage, petitions and protests but does the government care?

We know of Binayak Sen who was incarcerated for two years for taking healthcare to the adivasis in the badlands of Chhattisgarh. Or more recently of Aseem Trivedi who drew cartoons against corruption. But there are countless others who are thrown into jail for reasons that beat belief: because they joined demonstrations, protested or sang songs that may have mocked the government. Take the case of three women from Idinthakarai village in Tirunelveli district of Tamil Nadu. That village, along with several others in the vicinity, as readers of this magazine would know, has been protesting against the commissioning of two huge nuclear power projects in their neighbourhood. In September, about 50 women were arrested on charges ranging from carrying deadly weapons like “aruval (machetes), knives, sticks and crowbars” to singing obscene songs. There is TV footage that shows they were unarmed while standing up to a posse of riot police.

In November all were released on bail, barring three women who have been charged with sedition and waging war on the state. They appear to have been selected randomly. It is difficult to guess why because they can hardly be termed the ringleaders of that mass protest against nuclear power. All that we know is that middle-aged women, not well off, not very well educated and with no political affiliation, have been languishing in a jail that’s a long way from their homes. It is difficult to imagine a more unlikely trio as being seditionists or a threat to the state. Yet those who brazenly contravene the laws and regulations of the country, powerful tycoons with vast business empires remain untouched by the law as do political goons who have done much to destroy its economic and social wellbeing.

Two things mark India as a country that has lost its early moorings and become prey to fear, greed and political immorality. One is the death last week of Bal Thackeray, founder of the fascist Shiv Sena, a party known for nothing but the lumpen violence it unleashed for three decades, and the encomiums that flowed in its wake. Every figure of note, from head of state President Pranab Mukherjee to iconic stars such as Amitabh Bachchan and Lata Mangeshkar were, unaccountably, deeply bereaved. Mukherjee found the passing of Thackeray “an irreparable loss”, while Mangeshkar felt “orphaned”. The rest of Bollywood competed in nauseous adulation even while Thackeray’s hordes were engaged in their favourite sport of terrorising India’s financial capital. What does all this say about us?

Or take the case where the cream of our business community was accused of stashing away several thousand crores of rupees in illegal accounts in Geneva thanks to the accommodating ways of the Hongkong and Shanghai Banking Corporation (HSBC). While some of those named, such as Mukesh and Anil Ambani, were quick to deny the charges made by Arvind Kejriwal of the India Against Corruption movement, neither the government nor HSBC have responded clearly to such grave allegations of financial misdemeanour. The tragedy of India is that the Kejriwal allegations are not new. The list of the illegal account holders has been doing the rounds for over a year, information which has been with the government for some time now. It is puzzling why the government has done nothing to bring to book a bank which has been forced to pay a high price for similar acts in the US.

My question is simple: who are the people actually waging war against the state? Is it fisherfolk and other dispossessed people who are protesting against a project they fear will gradually lead to loss of livelihood? Or, is it political entities that spread hatred among communities and let loose the lumpen brigade to kill, plunder and destroy property? Or, is it corrupt business people who evade taxes through brazen hawala transactions? Communal and sectoral hatred imposes as much a cost on the| nation as the economic depredations we have been hearing.

Since the time of Nehru, there has been talk of doing away with the “highly objectionable and obnoxious” sections of the IPC related to sedition and waging war. If the state is not willing to repeal these laws then it needs to understand who are truly guilty of such offences. It is not the fisherfolk or other poor protestors.