Jonas Salk, the man who humbled the dreaded polio virus, was that rarest of scientists, the "unconventional upstart" 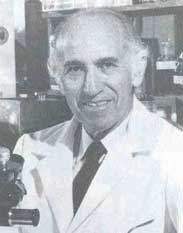 WHILE the world celebrates a dramatic reduction in polio incidents, its scientific and medical communities mourn the death of the conquerer of the disease -- Jonas Salk -- at the age of 80 from heart failure on June 23, at Green Hospital, La Jolla, California.

Salk's story is one of a relentless streetfight, and of a no-holds-barred rivalry between 2 scientists who fought a common enemy: an insidious virus that still occasionally leaves -- in pockets of underdevelopment the world over -- many of its victims on prosthetics -- leg-supports or inside tank-like iron lungs -- paraplegic at best, quadriplegic at worst, too weak to walk, sometimes even to breath.

Infantile paralysis, or poliomyelitis, had terrorised people worldwide till the early '50s, a time when its severe epidemics maimed thousands of children in Denmark, Germany, Belgium, Japan, Korea, Singapore and, inevitably, India. Polio innoculations with injectible vaccine, created by American scientist Jonas Edward Salk in 1952, and later the mass administration of oral vaccine developed by Albert Sabin, saved millions of lives. Even now, the vaccines offer tremendous hope to developing nations like India, where the polio incidence rate still stands poised and ready for trouble at 9 per 1,000 population.

The early success of Salk's vaccine, which was based on inactivated (the virus' protein cover is retained but its nucleus destroyed by formaldehyde) pathogenic viral strains, developed at the Pittsburg University laboratory, made the bright, unconventional scientist a celebrity. But the vaccine had sparked off a controversy; Salk earned the sobriquet "upstart" for tactically booting his vaccine ahead of Sabin's creation.

Salk first tried his vaccine on a few monkeys, then on protected-recovered-from-polio children and on himself and his family. A single shot of the vaccine seemed effective agaist all 3 strains of the polio virus. During the same period, Sabin's orally admininstered vaccine was nearing the stage of efficacy trials -- which is why it became necessary for Salk to carry out largescale trials before Sabin did the same. This is where a precedent for the help of commercial labs was securely established for all time to come.

In a commercial laboratory, the first batches of the Salk vaccine used in trials were not adequately inactivated. In what is now known as the infamous "Cutter incident", some 200 children and adult subjects who were injected at the Cutter lab contracted polio. Public condemnation followed. Although the lab was not under his control, Salk went on a guilt trip he would never quite recover from.

In any case, the incident led to stricter safety standards for the vaccine, and the Salk vaccine became popular in the West. Later studies, including one done in the Ivory coast in 1993, revealed that supplementing Sabin's oral vaccine -- which became available in the late '50s -- with a single-shot Salk vaccine would offer greatly enhanced protection.

Salk, hyper and thin from rapid energy burnouts, always wanted to change the way things were. He dreamt of setting up a centre of excellence for biologists: he succeeded in 1962 when he set up his laboratory on a clifftop overlooking La Jolla. Designed to near perfection by the renowned architect Louis Kahn, the famed Salk Institute is dedicated to frontier research in biology and microbiology. It became a sanctuary for geneticists, microbiologists and biophysicists. Mathematician Jacob Bronowski did a stint at Salk's. The co-discoverer of the dna double-helix structure, Francis S Crick, works there today.

Setting up the project, Salk the Visionary had declared, "I will build a laboratory in which even Picasso will find it comfortable to work." Micobiological research did not excite Picasso, but Salk's message got through (Salk was a great one for the "aesthetics of science"). As fate would have it, Picasso's girlfriend, Francoise Gilot, married Salk in 1970. Salk's first marriage with social worker Dona Lindsey -- with whom he had 3 sons -- had broken up in 1968. One of them, Jonathan, co-authored with Salk a seminal work on population expansion and human values.

Salk had a fairly conservative and hardworking European-Jewish background. Born and brought up in New York, he graduated from New York College of Medicine in 1934, became a research fellow there, and gained his medical doctorate in 1939. He spent 3 years at New York's Mount Sinai Hospital and then joined the virus research unit in the School of Public Health, University of Michigan, working on the influenza virus.

Rising through the ranks rapidly, he became the head of the Virus Research Laboratory by 1947, holding the post till 1963. The University of Pittsburg invited him in 1949 to join a new unit that looked into viral diseases. Salk's quick rise had occasioned many raised eyebrows, Sabin's being the most prominent. Their rivalry became all the more serious as Salk sought allegiance with Basil O'Connor, a suave lawyer and friend of Franklin D Roosevelt who, as the president of the National Foundation of Infantile Paralysis, had control over the research funding; scientists' misgivings about O'Connor was due to the razzle-dazzle attached with his fundraising programmes. And Salk caught the brunt of the animus this engendered till the last days of his life.