Can an inventory help manage e-waste? 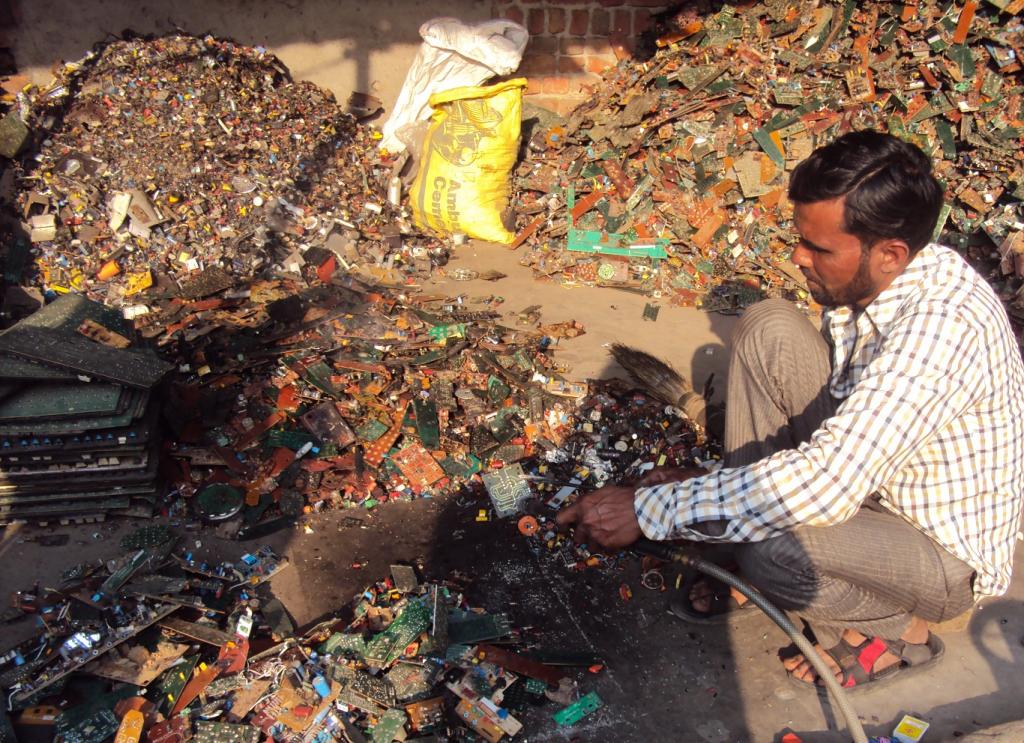 In 2016, the world generated 44.7 million metric tonnes (Mt) of e-waste, of which only 20 per cent was recycled. Credit: Sadia Sohail/CSE

With half  the world’s population using internet, 7.7 billion active mobile cellular subscriptions, and 4.2 billion active mobile broadband subscriptions, a humungous amount of e-waste will be generated in the future, according to a recently released report, Global E-waste Monitor 2017. The declining prices of the equipment, fast-changing technologies and increasing purchasing power parity worldwide are some of the reasons for the increase in the use of technology, says the report prepared by United Nations University, the International Telecommunication Union and the International Solid Waste Association.

In 2016, the world generated 44.7 million metric tonnes (Mt) of e-waste, of which only 20 per cent was recycled. 76 per cent of e-waste was either dumped or treated by the informal industry in ways harmful to the environment as well as human health.

The Basel Convention of 1989 stated that in order to protect human health and the environment, hazardous waste should not be traded freely like ordinary commercial goods. Yet, developed nations send their underutilised/ used electronics and electricals to developing nations, most of which are rendered useless on arrival. Disguised as products, a lot of electronic waste is exported from USA and EU into African and Asian nations such as Nigeria and India which do not have adequate infrastructure to handle this waste. A case study on Nigeria showed that in 2015- 2016, EU member states sent 77 per cent of e-waste to Nigeria. As per the Directorate General of Foreign Trade, illegal import of e-waste in India stands at about 50,000 tonnes annually.

E-waste production across the world 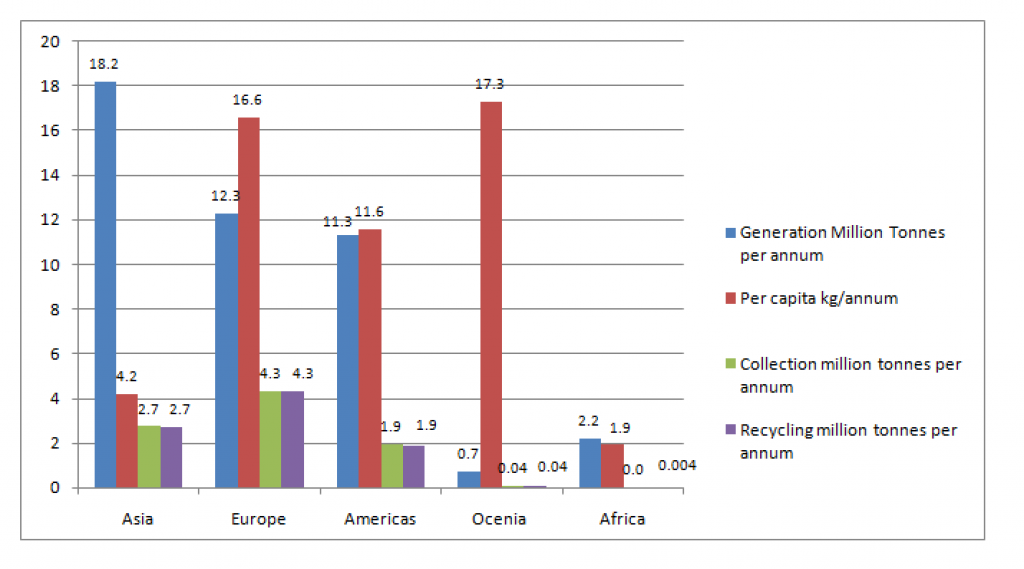 What classifies as e-waste?

Simply defined, e-waste is any digital, electrical and electronic equipment that is no longer in use. Technically, it is also addressed as WEEE – Waste from Electric and Electronic Equipment. The report found that only 61 countries comprising of world’s 66 per cent population have legislations for e-waste management. Of these 61, only 41 countries have official e-waste statistics.

The environmental relevance, weight, size, and material composition differ considerably for each electrical or electronic product. Taking these differences into account, categorisation can be grouped into roughly 54 homogeneous product types, referred to as the UNU-keys. In the figure below, 54 UNU-keys have been grouped into six categories rearranged under WEEE Directive and gives the estimated growth rates per category for ten years up to 2020. Almost all categories have seen a rise in the last decade but of all only CRT screens is seeing a decline in production, whereas it is expected that waste from temperature exchange equipment and small and large equipment will have the largest growth rates.

The lifecycle of e-waste can be broadly represented in three steps: material flow, lifecycle and geographical boundary. There are three scenarios in which e-waste management is conducted. First, waste is collected through an informal sector which may recycle or dump the e-waste. In the second, e-waste is mixed with municipal solid waste and dumped in landfills. Lastly, producers responsible for their e-waste develop an Extended Producers Responsibility system. Most counties have combinations of these scenarios. 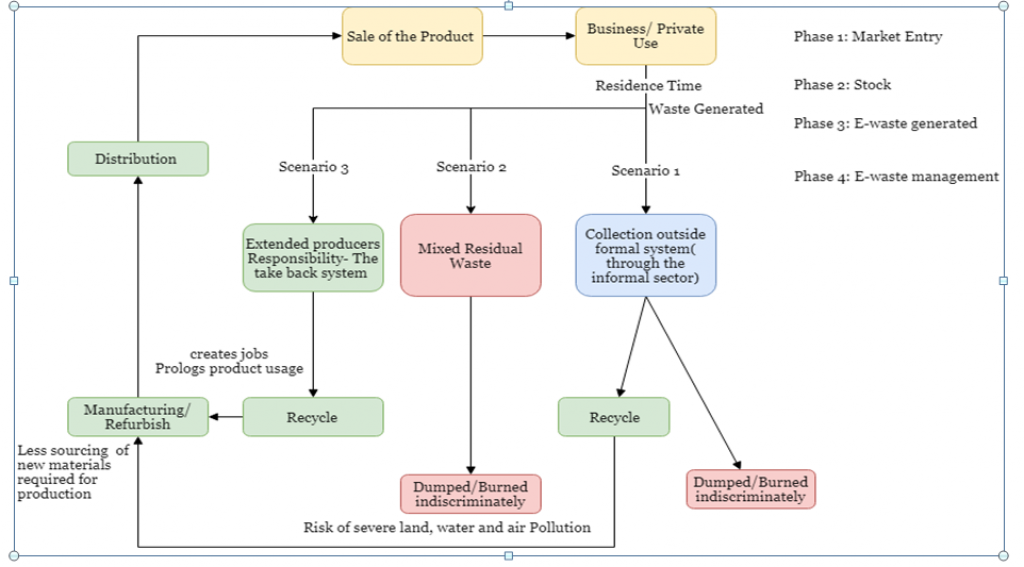 The route to manage e-waste is through data

The amount of e-waste is expected to increase to 52.2 million metric tonnes by 2021 with per capita amounting to 6.8 kg per annum from 6.1 kg per annum. An annual growth rate of 3 to 4 per cent is expected.

For better accountability, all the remaining countries in the world should form legislation for management and handling of e-waste. Dumping e-waste from developed countries to developing/under-developed should be regulated. Legislations would lead to better data on the generation and processing of e-waste. Better data will help improve track the amount of e-waste generated, reduce e-waste, promote recycling, and prevent illegal dumping and emissions. It will also help create jobs, set and assess targets and policies, identify best practices.

The total value of all raw materials present in e-waste is estimated to be 55 billion Euros in 2016, which is more than the 2016 Gross Domestic Product of most countries in the world. The value of raw materials in wasted mobile phones was 9.4 Billion Euros alone. Up to 60 elements from the periodic table can be found in complex electronics, and many of them are technically recoverable like the precious metals, including gold, silver, copper, platinum, and palladium. E-waste inventorisation will also lead to better recovery for the materials, thus creating a circular economy beneficial for economic and employment opportunities for e-waste management in the world.