Water in a sieve

Regulating access to genetic resources and equitable sharing of commercial benefits of biodiversity are among the most contentious issues under the Convention on Biological Diversity (CBD). The tenth Conference of Parties, scheduled October 18-29 in Japan, is expected to evolve an international regime on access and benefit sharing, also called ABS, from genetic resources. However, the idea of ABS itself remains a pipe dream.

A major snag in CBD is a shift in focus from the ecological and scientific value of biodiversity to its commercial value. The biodiversity-rich developing nations had high expectations from CBD. They succeeded in establishing sovereign rights of states over their biological resources, besides inclusion of equitable sharing of commercial benefits as one of CBD’s objectives.

State ownership over biodiversity, however, ignores the world’s interdependence on genetic resources and the evolutionary history of crop plants. Cultivated plants have originated in different parts of the world, so nations are in a complex network of plant genetic interdependence. No region can afford to isolate itself, or be isolated, from access to plant germplasm of other regions.

The alienation of biodiversity from the common heritage of humanity would adversely affect global food security, biodiversity research, investment and international relations. Moreover, livelihoods of farmers and indigenous communities in the developing countries are innately linked to biodiversity, making them more vulnerable to restrictions on access to the global plant genetic resource.

Global experience since CBD came into force in 1992 proved that benefit sharing, both as an incentive for conservation as well as royalties for access to traditional knowledge, is akin to fetching water in a sieve. The limitations of known ABS models are quickly realized when compared with benefits of free exchange of genetic material. For example, rubber, a crop introduced from Brazil, is the livelihood of more than one million farmers in Kerala. Besides being the bedrock of a robust rubber industry, Kerala has also achieved the highest productivity of the crop. We wonder whether ABS arrangement will ever match the benefit the communities gain out of rubber in Kerala. 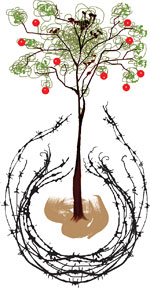 Patents are granted for novel inventions amenable to industrial applications. Traditional knowledge is developed in a cultural and subsistence milieu instead of a competitive industrial context and is often communicated and applied openly. It is a challenge to provide commercial benefit for such community knowledge. Protecting traditional knowledge by documenting it would prevent misappropriation by the private sector.

A resolution of the UN’s Food and Agricultural Organization in November 2009 called upon CBD’S Conference of Parties to consider the special nature of genetic resources for food and agriculture because all countries depend on these resources to address environmental, sustainable development and food security challenges. It is time we realised commercial benefits derived through sharing of biodiversity and the associated traditional knowledge are insignificant in the face of vital issues such as food security. Benefit sharing can neither be a substitute for innovation nor a sustainable source of income for rural communities.

A plausible change in the intellectual property regime to address the concerns of the developing world in addition to North-South collaborations in research, development and commercialisation of biodiversity is worth pondering. However, the South is left with few options as the global economic scenario warrants intellectual property protection. The developing world, in its own interest, should forgo benefit sharing to facilitate free exchange of genetic resources.

Moreover, biological resources are truly renewable. Their use at one place does not mean they can’t be used elsewhere.

Priyadarsanan Dharma Rajan is with the Ashoka Trust for Research in Ecology and the Environment. K D Prathapan is at the Kerala Agricultural University, Thiruvananthapuram