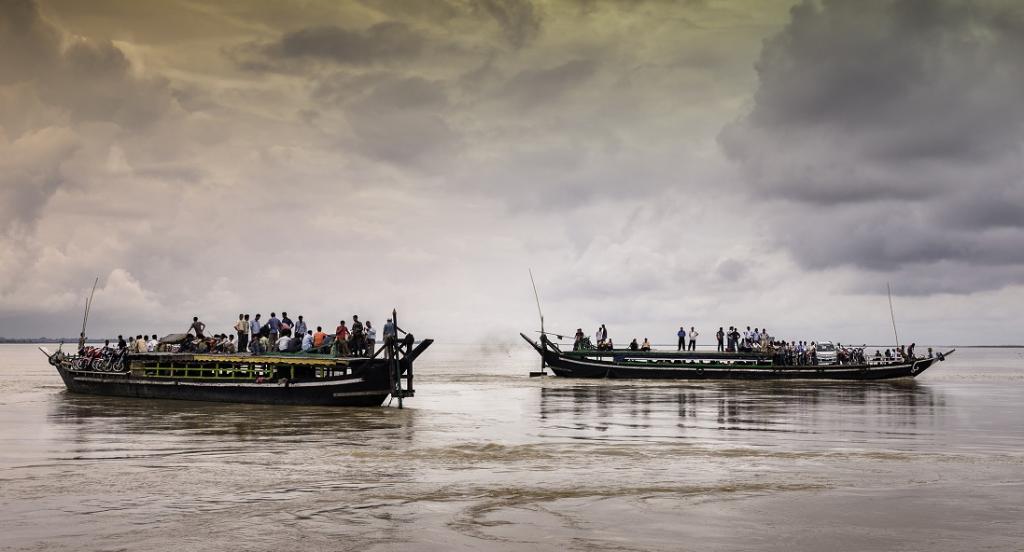 Boats near Majuli island on the Brahmaputra in Assam. Photo: istock

This is the final of a two-part series. The first part can be read here

China plans to develop a large-scale dam on the lower Yarlung Tsangpo that is known as the Brahmaputra river in India.

The mega dam is proposed inside the Grand Canyon of the Yarlung Tsangpo, where the river drops by 2,000 metres in a short span, making it an ideal place to harness hydropower.

This could be the world’s largest dam, providing some 300 billion kilowatt hour of power every year.

There is a fear that such large-scale damming of the river would affect the water flow downstream in India and Bangladesh. Yarlung Tsangpo is called the Siang as it enters Arunachal Pradesh from China.

The river flows for about 1,625 kilometres in Tibet, parallel to the main range of Himalayas, before entering India in Arunachal Pradesh. The Siang as it is known, flows down the Himalayas, enters the Assam valley, joins two other major tributaries, Dibang and Lohit and together they become the Brahmaputra.

To mitigate the adverse impact of the Chinese dam, India could also create a battery of reservoirs in the Dibang valley that will ease out flow regimes and try to offset the changes happening in the upstream reaches of the river.

China had earlier planned five dams on the main stretch of the river, with two of them completed last year. The Chinese claim that they are the building run-of-the-river projects.

Even the so-called run-of-the-river projects would reduce water flow in the Brahmaputra, especially during the lean season.

Such changes in a river’s dynamics are considered profitable by the respective riparians. The powerful riparians proclaim their ‘legitimate rights’ to develop hydropower on the rivers passing through their territories.

The bilateral tensions also spur a dam-building race; the riverscape becomes the victim, with devastating consequences for the fragile ecology of the region.

Beyond ‘command and control’

Federalism is a notion of distributing power between multiple levels of governance.

‘Multi-level governance’ is a term used to describe the way power is spread vertically between many levels of government and horizontally across multiple quasi-government and non-state actors such as non-governmental organisations, cooperatives and business groups.

The governments, by design at the national and state levels, could check and balance one another.

Multi-level federalism threatens the traditional model of the unitary power held by the Centre or the state and allows coexistence of solidarity between riparian communities.

The progressive evolution of centralisation of power has followed the typical ‘command and control’ model that is evident in the military, administrative, fiscal, and legislative architecture.

This cannot be applied to natural resources. We have to take the feministic perspective to restore and manage the fluvial landscape.

Multi-level water federalism triggers a whole range of processes that leads to decentralisation of political power and legal systems, for water allocation, access and sharing.

There is a tension between both unification and fragmentation. In a river basin, the regional and local cannot exclude each other.

Centralisation can coexist with decentralisation and localisation with appropriate mechanisms of power sharing. The erosion of state dominion encourages the need of new forms of governance based on natural capital and not on the basis of administrative boundaries.

Water sharing treaties have transformed riparian communities in the basin into a collection of ‘closed communities’ that are divided by mistrust and hatred. We have to reverse this.

Transboundary governance can develop a model to redistribute powers to different levels through a structure of watershed level or sub-basin level local and regional self-governments that are friendly with centre-state powers and institutions.

The framework should help water diplomats articulate these challenges and contribute to policy thinking and public discourse.

Where do we start?

We need a new paradigm of water governance on the model of “multi-level cooperative and symmetric federalism” and address emerging challenges of water security and sustainability  based on principles on solidarity, shared values and equality.

It goes beyond mere cross-frontier cooperation. For any transboundary agreement to work, it must involve the local people who depend on the waters.

Riparian treaties need to be re-organised to respect the integrity of the river basin. The way engineers and policymakers look at a river and a river basin must change.

A river is a complete ecosystem, not merely an artificial canal with impounded reservoirs. A river must be seen in a “flow-habitat continuum” with a mosaic of flow regimes and not just as stock of flow volumes between a series of dams meant to satisfy human demands.