Decentralised wastewater solutions the need of the hour for India

With the country hurtling towards a water crisis and treated wastewater a possible alternative, using models that are different from the centralised approach, is a sustainable and cost-effective solution

If appropriate and time-bound measures are not taken, the country may have to confront a series of associated problems, ranging from health issues due to poor sanitation and conflicts over water access, to food security and climate change.

The question is where would India get water from in the coming years?

India will need 1.5 trillion m3 water by 2030, according to the Central Pollution Control Board. How will it bridge the gap between water demand and supply?

A proposed alternative to India’s growing water crisis that is doing the rounds is the recycling and reuse of treated wastewater. This can be one of the measures to reduce the pressure on water resources.

Central urban development schemes — such as Jal Shakti Abhiyan, Swachh Bharat Mission, Atal Mission for Rejuvenation and Urban Transformation (AMRUT), Smart Cities Mission and Namami Gange — are crucial for wastewater treatment. They also emphasise the reuse of wastewater (including grey and blackwater) for various purposes, especially non-potable ones like horticulture and flushing.

Almost 80 per cent of the water supplied to a household is discharged as wastewater. The discharge is mostly untreated. So, it is a potential pollutant of ground water or being discharged into the natural drainage system, causing pollution in downstream areas and water bodies.

As of now, only 30 per cent of India’s urban wastewater is recycled. The apathy with regard to sewage treatment plants (STPs) lies in the fact that those in urban spaces are neither properly financed nor designed.

For example, in Delhi, the situation of wastewater treatment is better on paper. A consumption of 3,420 million litres per day (MLD) leads to wastewater of over 2,600 MLD. Of this 1,600 MLD is treated and 338 MLD is reused.

Mumbai is worse. According to officials in the Municipal Corporation of Greater Mumbai, out of a supply of 3,750 MLD, 2,300-2,400 MLD goes into the sea, almost untreated.

Instead of constructing large conventional STPs in which emphasis is placed on setting up a large infrastructure network, what we need to look at are alternative methods which don’t burden the economy and environment. 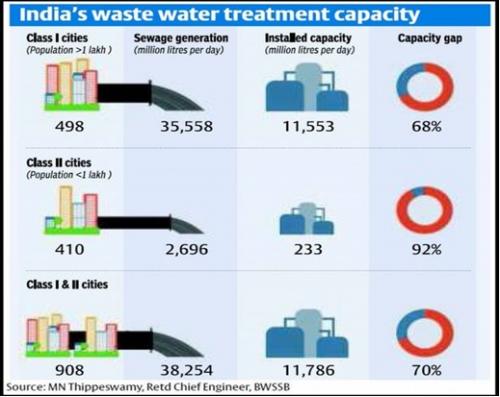 A proper mechanism is needed to deal with wastewater. The existing centralised approach should not be considered the only method. This is due to the approach's limited sewerage network access, inadequate functional STPs and budgetary restrictions.

Instead, decentralised wastewater management approach can be considered as a sustainable and cost-effective alternative as it treats, discharges or reuses the effluent in the relative vicinity of its source of generation. Like other systems, decentralised systems must be properly designed, maintained, and operated to provide optimum benefits.

In the rapidly urbanising cities of developing countries, decentralised wastewater treatment systems are an attractive solution for addressing the problems of water pollution and scarcity. They have been promoted extensively due to their low operation and maintenance requirements and smaller scale investments.

Decentralised wastewater treatment systems could be a feasible alternative for areas which are not connected to sewer networks as well as ones which are newly developed, so that the construction of their infrastructure is inadequate, not ready or would be executed in the future.

Based on the size of the served area, there are different scales of decentralisation:

Hence, sound policy and regulatory interventions by the Central and state governments are a prerequisite for launching innovative reuse projects. Government interventions will need to focus on incentivising the use of reclaimed water and developing institutional support mechanisms.

The National Green Tribunal in August said decentralised technologies such as bioremediation and / or phytoremediation or any other remediation measures could be started as an interim measures until STP units become functional.

Not only government but also many institutes and non-profits like the Delhi-based Centre for Science and Environment (CSE), have for the past few decades, been advocating and capacitating practitioners on the approach of decentralised wastewater management, with the aim of recycling and reuse of wastewater.

Also, as part of capacity-building, knowledge dissemination and technical support, CSE has been instrumental in the implementation of high-visibility and high-impact model projects such as a decentralised wastewater treatment system at Delhi Jal Board (DJB) headquarters at Varunalaya, where the treated wastewater is used for horticulture purposes.

To generate awareness, involvement, and participation from local users for the decentralised approach, an online web-based tool — MOUNT (Menu on Un-Networked Technologies for Sewage and Septage Management) — is being created by the CSE which comprises successfully implemented decentralised wastewater treatment technologies.

The socio-economic situation and the context of urbanisation highlight the need for decentralised wastewater solutions. In such circumstances, local reuse and recycling of treated wastewater too holds immense potential in terms of overall urban environmental sustainability.

The authors are with the Urban Water-Waste Management programme at the Centre for Science and Environment, Delhi