How to fight water scarcity this monsoon

Though the monsoon is behaving erratically, drought-prone districts are still water rich 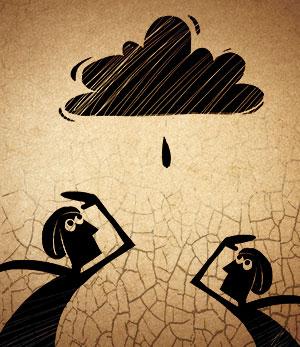 By the time you read this column, a clear picture of the monsoon would have emerged. As of the second week of July, it was officially normal. But the fear of a large number of districts getting deficit rainfall still lingered as the distribution of rain was uneven with the Northeast and eastern states receiving deficit monsoon. But the question is: why should farmers be worried about deficit monsoon?

Though close to 65 per cent farms in India are rainfed and one-third of the country faces drought every year, the extensive water conservation works undertaken under the Mahatma Gandhi National Rural Employment Guarantee Act, 2005, (MGNREGA), arguably, have insured farmers against deficit rainfall. From April 2017 to June 2018, according to the official website of MGNREGA, about 1.3 million water conservation structures were created—two such structures for each of India’s 597,464 villages. These structures are meant for soil and water conservation, groundwater recharge, irrigation and drought-proofing. About 70 per cent of these structures are helping farmers irrigate their croplands. Out of these, half are farm ponds, which are water storage structures that give farmers direct access to harvested water during rain-deficit years. This has emerged as an effective drought mitigation strategy. Going by the official data, half a million farm ponds have been created.

But MGNREGA has been creating enormous number of water structures since its inception 12 years ago. Since 2005, it has created 46 such structures for every village in the country. So these should be already helping in recharging groundwater and creating storages to harvest rainwater. Ironically, even a slightly deficit monsoon leads to a severe drought. This is why questions are raised on the effectiveness of these conservation works.

This is where one gets frustrated. Arguably, every village and farmer has the insurance against a deficit monsoon. But India’s drought history paints a different picture. During 2014-2017, India was shaken by severe spells of drought that hit over 500 million people across geographical regions. Unlike in the past, these droughts did not spare even the urban areas—metropolitan cities like Chennai, Hyderabad and Bengaluru declared water emergency and several towns resorted to water rationing. Over the years, even a slight deficit in rainfall is triggering severe droughts. This is despite the fact that India has more than 150 years of experience in drought management. And the chronically drought-prone districts receive around 750 mm of rainfall, while drought-prone areas receive between 750 mm and 1,125 mm of rainfall a year.

So, with the number of water harvesting structures already available, the country shouldn’t be worried about deficit rain. Even if one receives just 100 mm of rainfall a year, in one hectare, one can harvest as much as 1 million litres of water—enough to meet the drinking and cooking water needs of 182 people for a year at a liberal 15 litres per day.

But for this to happen, our policymakers must realise that drought management is not about drought relief. At present, our focus is on drought relief, but not thinking in terms of long-term relief from drought. For this, local communities must be given the authority to maintain these water harvesting structures. This is the strategy our wise ancestors adopted to tide over droughts even when there was no government. And they were successful.

(This article was first published in the 1-15th August issue of Down To Earth).