Numerous folk songs are weaved around women going to fetch water from a well. What do they say?

For us urban Indians who get water so conveniently delivered to our houses through pipelines and in bottles, water does not inspire much of imagination. But in villages, especially, in olden times when people had common wells, not individual hand pumps, women spent a lot of time hauling water home.

In dry parts of the country they still do, so water figures frequently in their songs. My mother comes from a sandy part of the Budaun district of Uttar Pradesh, where wells were once a lifeline. And it is impossible to stop her from talking about her world. So when I asked her about the songs around water, she merrily indulged me.

Turns out numerous folk songs are weaved around women going to fetch water from a well. And in the course of singing—actually, dancing since most of these are dance numbers—they make a plaint about the toil of hauling water, drop ample hints about their equations with the members of their family, talk about their anxiety about meeting a man as they step out of their houses. References to delicate wrists are common.

The song then goes on saying how the elder brother-in-law gets her a smaller pitcher to lighten her burden, but her mother- and sister-in-law cunningly give her two pitchers to fill. Her sisters-in-law come to her rescue and take the pitchers from her halfway home. Her husband goes a step further and appoints two Dheemar women to fetch water for her.

The Dheemar community was closely associated with water. On occasions like a wedding, recalls my mother, it would be the duty of the Dheemar men to fetch water and butter milk for the feast. The Dheemar women would collect water for the womenfolk. They would also bathe the new bride.

Many other songs talk of a chance meeting with a handsome wayfarer at the well and the blossoming of love. One such song begins with a handsome man going on a bicycle (cycle pe jairao chhel). The cycle in those days was like today’s Scorpio in villages, my mother pauses to explain, so the man must have cut a striking figure! Sure, a woman too is going to fetch water from a well (ek paniyan bharan chali naar). 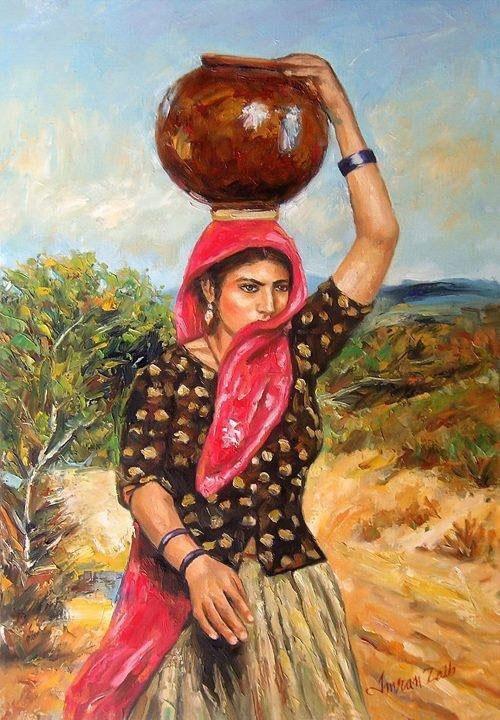 The man is thirsty and asks the woman for some water. The woman is shy. She makes an excuse—na mero lachey shareer, na doobe meri gaagar (I can’t bend, nor does my pot sink into water)—and tells him she will serve water at her house. The man turns out to be her husband who had been away for years. In one song it is Draupadi who goes fetching water and is waylaid by Keechak.

Not in every song the woman is vulnerable or shy. In one popular song—Sasul paniya kaise jaaun, raseele dou naina (Mother-in-law, how do I go fetching water, my eyes are so alluring)—she probably has a tryst with her lover. She even warns her sister-in-law against spilling the beans to anyone.

In dry Rajasthan and mountainous Garhwal, where finding water can be tough, women lament deep wells and dry springs in their songs. Now that protests over the industrial threat to water have become a big preoccupation, songs have been sung in protest. As Linda Hogan, poet and environmentalist, says, “when we sing for water, we sing for ourselves”.

The imagery of women fetching water is so powerful that it has been liberally exploited in Indian mythology, where Krishna teases the gopis (milkmaids) at the well, often breaking their pots. Who can’t hum the Bollywood classic Mohe panghat pe?

While mythology gives a new meaning to images borrowed from daily lives, folk songs too borrow plots from mythology and give them a twist. In one such song the story of the great churning of ocean is appropriated by a proud wife. Here Goddess Parvati goes fetching water and the sagar (big river), bowled over by her beauty, tries to entice her with the 14 gems inside it. It even mocks Shiva in an attempt to evoke self-pity in Parvati.

(Shiva is inelegant and unattractive
Why are you putting up with unending hardships?
I have 14 gems inside me
We can live our lives in luxury)

Parvati fills her husband in on the river’s behaviour. And surely, Shiva, in his characteristic rage, teaches the river a lesson by taking out all its 14 jewels!

In devotional songs and qawwalis, the scene of fetching water is used as a metaphor for following one’s inner voice, staying the path of love. Remember “Bahut kathin hai dagar panghat ki” by Amir Khusro, that 13th century poet who wrote in many tongues, from Persian to Hindavi? Meera too talks of falling in love with Hari when she goes to fetch water. The breaking of a pot becomes a metaphor for transcending the limitations of body or for rising above conventional morality.

Kabir employs the motif of well to stress oneness, where our bodies create the illusion of separateness.

(O Kabir, there is only one well from which all fill water
Vessels create differentiation, but water in all of them is same)

Folk songs do not have such layers of meaning. But it is the act of singing that helps one face life by lessening the burden of emotions. As a child, my mother loved following grown-ups to the well, so her grandmother gave her a tiny brass pot to fool around with. Her uncle warned her she would fall into the well if she didn’t keep away from it. And sure she did. Till today she is scared of water! But songs she can still sing in her croaky voice.