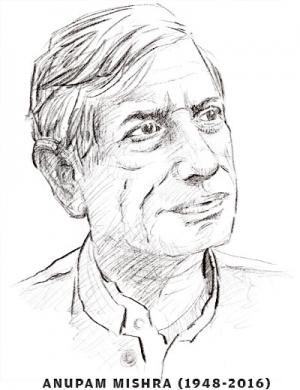 Anupamji was the last of that generation that taught India its politics of environment. He was the man who went to Chipko, took Anil Agarwal, founder editor of this magazine, to Chipko, and brought back the story that the movement was not about trees but about the political determination of people to fight for the environment because it was a matter of their survival. He made us understand the true politics of environment, which is the politics of the poorest in this country, their knowledge, forgotten and neglected, and how that has to be part of development.

I remember vividly, as if it were today, my journey with Anupamji and Anil into the desert of Rajasthan. We were travelling in Anil’s red Maruti car, and the three of us stopped on seeing a flying saucer-type image in the desert. They got off from the car and talked to a person from the nearby village and found out that it was not a flying saucer, but a temple of modern India. It was a water-harvesting structure built in a way to collect every drop of water received in that water-scarce area. From there, I know, Anupamji did not look back. He had brought us to show the work of a young activist in Bikaner, who, he said, had been doing remarkable work to protect the grasslands for cattle. This activist, who, we learnt, was Shibu Patwa, has continued his good work and is one of those gems that Anupamji had found. Anupamji’s entire journey was to locate the gems of India: people who were doing work without fame, without noise, without any fanfare, just real good work. Anupamji found them, nurtured them and worked with them.

Today, many activists, including myself, can look back at our journey and see what an important role he played in our lives. How he cautioned us and advised us, how he made us stay true to our mission. He was the guiding philosopher that we all need in our lives and I know of countless grassroots activists in this country who are what they are today because of Anupamji.

But his most important achievement, I believe, will remain the work he did on tanks in India. If you look at the two books on the subject by him, they are not about the structure of the tank, but about the society that made the tanks. For him it was the story of the society that needed to be taught because that story teaches us about the need to rebuild a resilient, caring and humane society that would once again build its water bodies.

I remember, he used to narrate stories about a sex worker who built tanks in Rajasthan, about a Maharaja and a trader who too built tanks. For him it was always about people.

Anupamji has taught us that the environmental movement is not about technology, trees, tigers or bees. It is only about people and the humanness of society. If we want to remember him, let’s remember that.