We create jobs-for the US 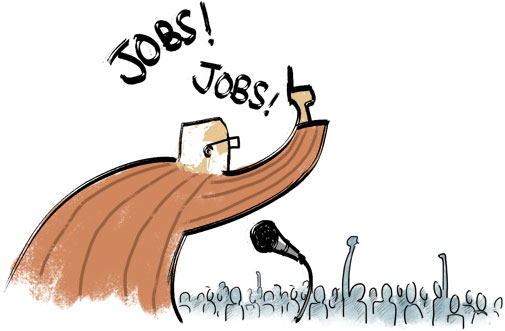 Barack obama's town hall speech at Siri Fort at the tail end of his India visit captured the country’s imagination and, very likely, touched its soul. That’s as it should be. Such a stirring “address to the people of India” on the sensitive issue of religious tolerance is unusual from a visiting head of state. But there was another speech by the American president that did not get enough play in the media and that’s his address to the US-India Business Council summit a day earlier. It was not the kind to move hearts but it should certainly have worried our policy makers.

Here, Obama made no bones about what the US wanted from its partnership with India and how this was already paying off for his country. Since he outlined his vision of the economic partnership during his 2010 visit to India, bilateral trade has gone up some 60 per cent to nearly $100 billion a year. This was undeniably a win for the US and its workers because exports to India are up nearly 35 per cent and, as Obama exulted, those exports “support about 170,000 well-paying American jobs”. At the same time, Indian investment in the US had been growing, too. “And those Indian investments are supporting jobs across America. We’ve got high-tech jobs in upstate New York, manufacturing jobs in North Carolina, engineering jobs in places like Michigan and Ohio.”

Bully for America. But what of India which desperately needs to create 12 million jobs for its ever increasing legions of young unemployed? As Prime Minister Modi responded with a platitudinous delivery at the high-level business meeting it was clear that the government still has no idea how to create the much-needed jobs for its huge workforce that swells by 10 million annually.

At the recent Aero India 2015 in Bengaluru, Modi came out with an idea—not a blueprint—that local defence production would be the heart of his Make in India programme. His logic was rather simple. Since India was the largest importer of defence equipment, a 20-25 per cent reduction in imports could directly add up to 120,000 highly skilled jobs. But it was more a flight of fancy since he knows as well as anyone else that such skills are thin on the ground in India’s poorly educated and largely untrained workforce. To believe that foreign companies in the high-tech defence sector could use India as part of their supply chain and an export hub is merely wishful thinking.

For investors to consider India as any kind of manufacturing base there needs to be a major overhaul of its infrastructure and ways of doing business. The fact is for all his rhetoric about turning India into a manufacturing powerhouse, Modi has been unable to impart any dynamism to the economy. The latest criticism came from a doyen of industry, Deepak Parekh, chairperson of HDFC Bank, who bluntly said that after nine months of the Modi government, very little had changed on the ground. If anything, ease of doing business had become a little more tough since it took more time for his bank to get approval to raise capital than in earlier years.

The bigger issue remains jobs. Modi must be well aware employment in the formal, organised sector is stagnating owing to higher automation. According to official data, 400,000 people lost their factory jobs in India during 2012-13—at a time when Obama was setting a record by having created 4.5 million jobs, a figure that seems a pie in the sky for us. Modi needs more than catchy slogans to give the young the jobs they desperately need.