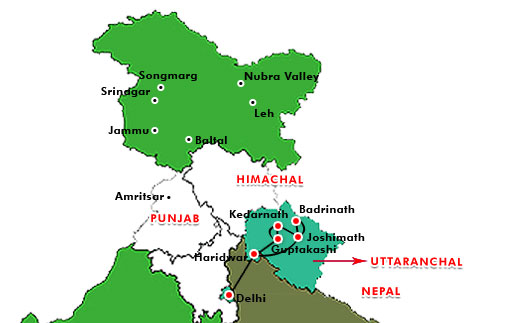 The weather has started throwing tantrums in Uttarakhand the past few days, forcing the authorities to stop the Char Dham Yatra earlier this week.

It has just been two weeks since the Badrinath temple dodged a weather bullet  when an alleged cloudburst swept away a 20 metre portion of the National Highway 58 (which connects Badrinath to New Delhi) near Lambagar in Chamoli District of Uttarakhand.

Those bad days are back it seems as hundreds (maybe close to 1,000) people are now stranded in the state because of ongoing landslides on the highway and heavy rains. Adding to the problems created by landslides, the rivers Alaknanda,Mandakini and Bhagirathi are now flowing near the danger levels, which has forced the authorities to shift the people living in around five-six villages (near the Mandakini river) to safer places and shut the schools in the areas. River Alaknanda is also flowing about three metres short to the danger mark in Rudraprayag area and same is the case with river Bhagirathi.

A newly constructed bridge after the 2013 Uttaranchal Disaster on the Saraswati River in Rudraprayag area broke due to the rains stranding tourists heading towards Kedarnath.

As per the news reports, around 300 tourists have been stranded in Joshimath area itself. Turning down the advisory given by the authorities and India Meteorological Department (IMD), India’s Yoga Guru Baba Ramdev and a group of large number of his students continued their journey to Gangotri and now have been stranded at the same place.

The situation is likely to turn worse this weekend as more rains are expected and once again nature brings Uttarakhand under the weather gun.

Vidarbha in Maharashtra received 138 per cent of normal rainfall (expected on a day) on Tuesday with many places witnessing a rainfall amounting more than 100 mm. These heavy rains flooded many areas of Vidarbha. Western Madhya Pradesh received 271 per cent of the normal rainfall of a day on Wednesday whereas Vidarbha again got 246 per cent more than a day’s rainfall.

Due to this low pressure, rainfall in India has improved and now stands at 36 per cent less than normal (unlike previous 41 and 43 per cent). Such low pressures often bring severe weather that is heavy rains and their paths are determined by the winds at the upper parts of the troposphere (lowest portion of the Earth’s atmosphere which hosts the weather systems) prominently at about 30,000 feet above the ground. A low pressure region is observed during the monsoon season across Tibet and the winds circulating around it drive these low pressure systems from Bay of Bengal, making it to move westwards through Central India. As in any low pressure system in the Northern Hemisphere, winds converge (move anti-clockwise at its base) and diverge aloft (move clock-wise at such 30,000 ft levels) the winds flowing at these (30,000 ft) levels across India follow a trend. 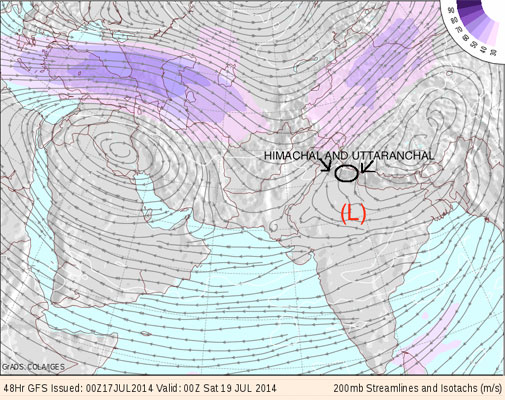 The Image above is of the GFS (Global Forecast System) weather model  showing present winds at 35,000 ft above ground (aircraft fly in India at this altitude). One can see that the winds (their direction is shown by the arrowheads) are blowing in clockwise direction across northern half of India, over Nepal and Tibet. Hence any low pressure system or any cloud in northern India will move as per the winds displayed in this image—it will bend northwards and then north-eastwards. Red coloured symbol (L) shows where the low pressure is right now (on July 17) with Uttarakhand lying at the boxed location shown in black.

Hence its clear that the low pressure area will move close to Uttarakhand this weekend and will pull more moisture from surrounding areas and the Arabian Sea. Thunderstorms need moisture, energy and instability in the atmosphere to form and these ingredients will be available and hence thunderstorms bringing heavy rains are likely in Uttarakhand till at least July 22. 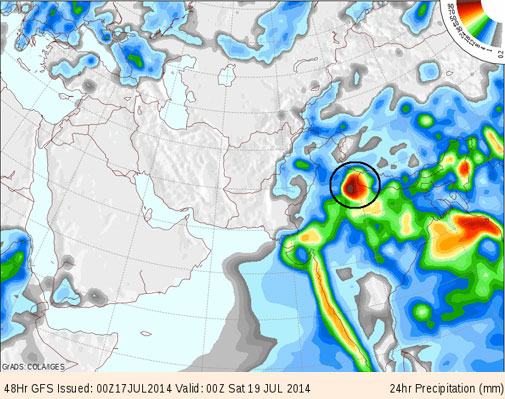