Western disturbance to impact many parts of India

A wet weekend is in store for northern and central India

A wet weekend is in store for northern and central India

The winter seems to have arrived full throttle in parts of northern India as temperatures have dropped considerably in the past few days. Ludhiana in Punjab recorded a minimum temperature of 2.7°C on Wednesday morning, 4°C below normal. Other areas of Punjab and Haryana also witnessed minimum temperatures in the range of 4 to 6°C.

An approaching western disturbance, however, is expected to cause a change of weather in northern and central India and western parts of Maharashtra.

What is a western disturbance?

While a Google search would show that a western disturbance (WD) is an extra-tropical storm which originates in the Mediterranean region, the meaning of WD lies in its name.

The disturbance travels from the “western” to the eastern direction. Disturbance means an area of “disturbed” or reduced air pressure. Equilibrium exists in nature due to which the air in a region tries to normalise its pressure.

A WD is associated with rainfall, snowfall and fog in northern India. Upon its arrival in Pakistan and northern India, clouds along with rain and snow also arrive. The moisture which WDs carry with them comes from the Mediterranean Sea and/or from the Atlantic Ocean.

Appearance of a western disturbance in weather model

A perfect west to east flow (technically referred to as a zonal flow) of the winds (jet streams) at an altitude of 30,000 feet depicts stable weather (lack of low pressure regions) in that region. A jet stream is a river-like current of air circulating across the globe at upper levels of the troposphere (near the altitude of 30,000 feet). Click here  to read about how jet streams influence the weather. However, when a broad low pressure region (referred to as trough) is present, this current dips southward, creating a kind of “U shape”. 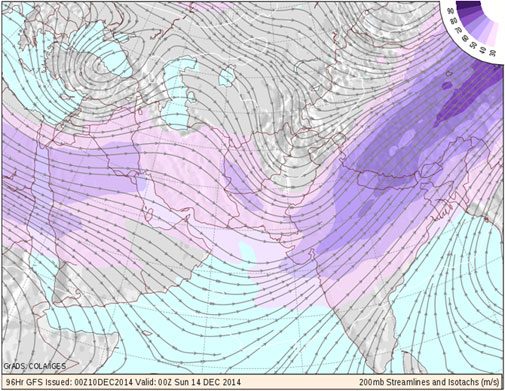 What you see above are the winds circulating at an altitude of 38,000 feet. This map shows the condition on Saturday, December 13. Arrows indicate the direction in which the winds (the jet streams) are blowing. Now check the region of Pakistan and bordering northwest India. You can see how the winds are dipping to create a “U” figure. This reflects the presence of a WD. 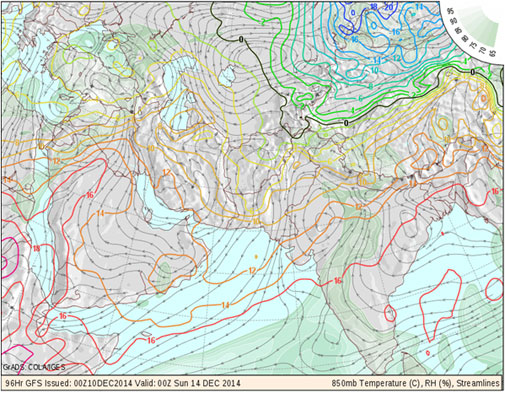 Now let’s go down a little in the troposphere to an altitude of 5,000 feet above the ground. Seen above is a weather map showing the winds and relative humidity at 5,000 feet above the ground as on Saturday, December 13. Green patch indicates moist air. If you look towards Rajasthan, you can see that winds are blowing anti-clockwise. In the northern hemisphere, such an anti-clockwise flow of air indicates a low pressure region. This low pressure is associated with the WD mentioned above. To normalise the reduced air pressure over Rajasthan, moist winds from the Arabian Sea seem to be blowing towards Rajasthan. As a result, cloudy weather and rains will be witnessed in the green-shaded areas of central and northern India.

Impact of this western disturbance

On Friday, December 12, light rainfall and snowfall will commence in high altitude areas of Jammu and Kashmir. Later in the day, light rain and snow will spread to Himachal Pradesh with a cloudy sky. There is a possibility of a thundershower in Punjab/Haryana during the later hours.

On Saturday, December 13, the western disturbance will become more active. As a result, rains will spread in the plains of northern India. Rainfall is expected in Punjab, Haryana, Delhi-NCR, adjoining Rajasthan, Uttarakhand and western Uttar Pradesh. Thunderstorms and rainfall can also be expected in Madhya Pradesh and eastern and western Maharashtra. More snowfall for J&K and Himachal Pradesh is forecast for this day.

On Sunday, December 14, rain is again expected in northern India. There will be less snow for J&K and Himachal Pradesh. Snowfall is possible in Srinagar between Saturday and Sunday. Scattered thunderstorms are forecast for central India.

The effects (rain and snow) of WD will be over by Monday afternoon.

Dense fog is already being witnessed in the plains of northern India. As the western disturbance will be bringing more moisture, there will be an increase in fog. Low visibility problems will increase in Delhi-NCR, Uttar Pradesh, Punjab and Haryana from Saturday till Monday. Minimum temperatures will increase by 2 to 3°C but would drop again after the effect of WD vanishes.