What price the constitution?

Breakthroughs in genetic engineering have led to questions on the ethics of suchexperiments. Should scientists alone be steering the decision-making process? 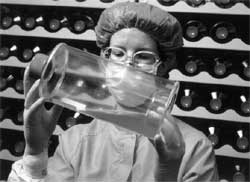 recent developments in genetic engineering have created a furore. The successful cloning of a sheep, christened Dolly, and the possibility of human cloning have raised questions of ethics which must be urgently addressed.

Application of genetic engineering biotechnology is proceeding at a relentless pace today. There is increasing moral and ethical concern over the potential dangers of application of this technology.

Dolly is the first mammal to have been successfully cloned from the cells of an adult animal. It is genetically identical to its mother, and was produced without insemination. This successful experiment has heightened public anxiety. It is feared that if this technology is allowed to be extended to humans, it will be a gross interference with the natural order and nature's schema, an affront to human dignity.Leading public personalities like us president Bill Clinton, and director-general of unesco , Frederico Mayor, expressed apprehensions. The Federation of American Societies of Experimental Biology, representing more than 52,000 scientists, was agreeable for a five-year moratorium on human cloning. The World Health Organisation (who) considers the use of cloning for replication of humans to be ethically unacceptable and recommends prohibition of human cloning, inter-species fertilisation, creation of chimeras and, as of now, alteration of germ cell genome.

Previous experiments to clone mammals from older cells had ended in failure until Wilmut and his colleagues at the Roslin Institute in Edinburgh, Scotland, successfully cloned Dolly from an adult cell. It has thus been demonstrated that dna from mature tissue can still direct the development of a complete animal even though these cells and tissues have long since differentiated to perform specialised functions. The technique is not out of the woods yet. Out of 277 fused pairs of cells where the donor cells were from an adult tissue, only one, Dolly, survived. But many questions remain unanswered. Will Dolly give birth to a normal lamb? Will Dolly age normally? Will this technique work in other mammals? For the moment, it is clear that cloning of an adult animal is possible by fusion of a single adult cell with a genetically unrelated egg.

Hard on the heels of this experiment came the declarations by us physicist Richard Seed that he would clone humans. The scientist, according to newspaper reports, was determined to set up a human clone clinic in Greater Chicago and subsequently expand the network. Seed said that his work would help infertile couples to have babies.

Dolly, her successor Polly, and Seed have confirmed the fears of those opposed to genetic engineering biotechnology on moral and ethical grounds. They argue that there are unforeseen hazards in this technology. They say that market forces and the unprecedented alliance between science and industry are pushing products without sufficient assurance of safety by regulatory bodies, and that they tend to marginalise alternative approaches that people traditionally use. They also say that biotechnology is stripping countries of the South of their genetic and intellectual resources through exclusive rights on genetically engineered products. These people feel that patenting life (genes) is highly unethical.

However, the overwhelming benefits of biotechnology cannot be denied. Genetic engineering and recombinant techniques are bringing an avalanche of useful products for humankind: life saving/enhancing substances, and products for prevention of disease, like vaccines. Scientists point out that there are strict regulations and testing regimens and, on the whole, there is a good safety record of new biotechnological products. The understandable reaction against Dolly and the prospects for human cloning, they say, should not escalate into a backlash and a turn-away from what genetically engineered biotechnology can do to improve the quality of life.
We are already in the era of gene therapy for humans to correct genetic defects in established diseases. These therapies are acceptable and are ethically cleared.

Three general strategies are being adopted in gene therapy: gene replacement, where a defective gene is replaced by a normal gene in the affected tissue; gene ablation, in which a lethal gene construct is delivered specifically to cancer cells; and genetic defence therapy against cancer and other diseases.

Some genetic approaches are being made to modify susceptibility to polygenic disorders - where many genes are involved and expressed together - such as coronary artery disease and diabetes. It is clear from the studies carried out that the risk in these procedures is not from the genes themselves but from the vectors in which the genes are carried to their destination. More than 200 experiments have been carried out. Not a single one proved beneficial or had lasting results so far.


From gene therapy to using technology for enhancement of certain human traits is a step that has created the moral dilemma. The trend is not easy to check as technology becomes easier. The question is: Should we tamper with the genetic code of healthy people? What are the risks involved? For a time it was fashionable to believe that people are shaped mainly by their environment after birth. This fitted well into the social engineering optimism of the post World War II era, as against hereditarianism. Proponents of the latter believed that intelligence, for instance, was largely hereditary. The Bell curve demonstrated by Charles Murray and Richard Herrnstein in a 1994 publication seemed to support this concept. It presented the disturbing thought that differences in intelligence between races and classes cannot be bridged.


The Vatican has recently dubbed organ donation a noble and worthy deed. The Vatican considers animal experiments justified provided they remain "within reasonable limits" and "contribute to the healing and saving of human lives". Every year thousands of people die of liver failure, awaiting liver transplantation. Xeno-transplantation - use of animal organs for human transplantation - is now on the agenda of clinical trials. Concern is mounting about the ethical, medical, social and economic issues involved. Does saving human lives justify raising animals to provide spare parts? Would it be an affordable option for third world countries? Does a technology that is available and can be applied provide sufficient reason for going ahead irrespective of cost and equity considerations?

There is also the question of an ethically and biologically dangerous violation of species barrier. A new porcine viral epidemic, similar to the Hong Kong bird influenza virus (a-h5n1) that has crossed species, is feared. An expert committee on xeno-transplantation held under the auspices of the who in October 1997 said that the technique offers exciting opportunities, but donor animals need to be carefully monitored for new pathogens. The meeting considered the use of grafts from transgenic, cloned or otherwise genetically modified animals acceptable provided human health is protected and human dignity preserved.


It is clear that biotechnology offers an unprecedented opportunity for advancing human health and well-being. But it is also clear that there are lurking dangers. The advent of gene splicing and genetic recombination in the 1970s led to an outcry that reckless scientists might create novel pathogens that would devastate the world.

Those fears were allayed by a group of scientists involved in recombinant dna experiments, who met in Asilomar, California, in 1975 and decided to put on hold certain experiments and imposed self-discipline. That was a kind of self-imposed moratorium. Since then, scientists have gone on to gene testing and therapy, and arrived at the doorstep of human cloning. Scientists have once again imposed a moratorium on themselves with regard to human cloning.

What is required now is legislation and regulation to address issues that arise from misuse of these techniques - for instance, exploitation of the public by commercial interests offering inappropriate or substandard technologies, with or without the connivance of physicians.

One of the key lessons learnt from recent debates on the social risks of technological advance is that policies should not rest on the advice of scientific experts alone, however essential that advice is. A wide-ranging process of social interaction should be set in motion, to include laboratory scientists, bureaucrats, people's representatives and journalists.

India, too, needs laws and regulations to steer genetic advances for the benefit of human-kind. The department of biotechnology of the Government of India and an ethics committee of the Indian Council of Medical Research, chaired by Justice Venkatachelliah, are addressing this issue. Courses are needed in bioethics in all universities and medical educational and research institutions. Bioethics ought to reorient the culture of our scientific pursuits, our decision-making bodies and the public. It is not for scientists to take decisions that affect the public at large.

V Ramalingaswami is National Research Professor, department of pathology, All India Institute of Medical Sciences, New Delhi. The article is based on the 13th C D Deshmukh Memorial Lecture delivered by him on January 14, 1998.