What they say, what they mean

Today's scientist is no longer the absent-minded cosmic thinker, the entity has emerged as a brash species that believes in elbowing its way up 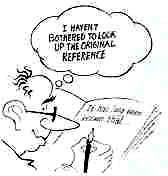 WHEN science becomes business, the winner is the one who publishes the most- Noticeably, as research publications became the primary determinant of success of a scientist in the market place, a'publish or perish'regime of practising science has been unleashed over the years. This has increasingly led to scientists racing to publish exaggerated claims with half-baked results or even cooked up data to cope with the 'struggle for existence'.

As the scientific community grapples with this justified 'survival of the fastest' syndrome on one hand, the proliferation of the publishing industry on the other hand ensured that there is a place for every one in the great scientific rat race. It is said that "for every research paper of a certain quality, there exists a journal of a suitable level of empathy". Gone are the days when everything that came from the scientist's desk was considered a faithful report emanating straight from an honest horse's mouth.

While cases of downright fraud are often caught - cornering the enlightened smooth operator red-handed - more subtle forms of manipulation to push through research papers are often not taken note of, or for that matter, debated at all. However, most practising scientists are well aware of this hide-and-seek game, and aspiring young scientists quickly master these tricks to acquire that extra edge over each other - members of the haloed community - to climb up the career ladder surreptitiously.