When business rules our kitchens 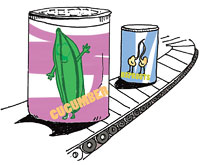 Once again there is a food safety scare. A deadly strain of E coli bacterium has hit Germany, where it has taken the lives of 25 people and affected another 2,300 till date. German food inspectors on the trail of the source of contamination ha­ve as yet made two errors—blaming Spanish cucumbers and then organic bean sprouts—but no breakthrough.

The investigation will not lead anywhere because we are refusing to look where it matters. The fact is that something is seriously wrong with the way the world is producing food and even more with the way it is managing its regulations for safety. But we just don’t get it.

Let’s recap past food scares to understand the crisis and the response. In 2005, avian influenza hit the chicken we eat. The world went on a rampage, killing chickens and wild birds to contain the deadly virus spreading across the connected world. But nobody targeted the real problem—the nature of the modern world’s poultry business, which is highly vertically integrated and globalised, and produces factory chickens not food. In this business companies strive for lower cost of ­production because agribusiness requires scale and global reach. As a result, it is widely accepted, chicken-manufacturing practices are leaving the birds susceptible to diseases and consumers vulnerable to mutated viruses. This is an inconvenient truth.

So what did the world do? It went after the backyard poultry business. Vietnam, under pressure from international food inspectors, went as far as asking its people to convert to factory-style methods. Ironically, in the name of hygienic food the world ended up promoting the very nature of the business that was causing shock and shame.

Cut to 2009 when the next big food scare hit the world: Influenza A (H1N1) virus, formerly named swine flu. Across the developing world, pigs, important sources of food for the poor, were slaughtered. But mega hog-factories, run by powerful food giants, were not indicted for their toxics-rich practices. The modern factory uses everything from antibiotics and hormones to biocides and vaccines to grow pigs in highly concentrated and unhealthy environments. The nature of business was not questioned.

Worse, the food crisis allowed the big business to further concentrate its hold over the lucrative pork. Family farms went out of business because of tightened safety regulations and cost of surveillance.

In 2008, China was racked by milk contaminated with melanine, which killed babies. Next year the US was hit by salmonella in popular brands of peanut butter.

Food has become a dangerous business. Just consider how the food scare over E coli, which is confined to the city of Hamburg, has hit farmers and shaken consumers across Europe. The reason is that food is no longer a local or national business; it can be grown in one place, pack­ed in another country, shipped to yet another for proces­sing and then lifted to supermarket shelves across the globe. It is an anonymous business built to scale, hence profitable.

The world is now hooked on this model of churning out vast quantities of food at the lowest possible cost. Industry does not care if it compromises public health. What’s worse, food regulations, designed for environmental safety and public health, end up promoting this fundamentally flawed and fatal model of growing food.

The problem is we have designed regulations for food like for any factory product. The focus is on good manufacturing practices, which boils down to improving internal hygi­ene by donning white coats and hair nets, scrubbing factory floors and using plastic in packaging. This ends up driving out small producers and local food vendors. They cannot keep up with the cost of meeting tougher standards, inspectors and now certification.

How, then, should it work? Cheap, mass-produced food, whi­ch forces farmers to cut corners and use intensive practices, cannot be the way to secure our health. Securing he­alth requires food regulators to see food as food, not business. It will mean drawing guidelines, which will incentivise food grown naturally and locally by small producers. It also means we pay more for food as consumers—or subsidise farmers for growing healthy and safe food.

This recognition is growing perhaps for the first time even in the US, the mecca of food business. In a recent article in Science leading academics have argued that the US must transform its agriculture, which has become environmentally and socially destructive. But it can do this only by transforming policies, particularly those that reward the consolidated agro-food industry’s thrust for large volumes of low-cost food, feed, fibre and fuel. This requires going back to the drawing board to invest once again in knowledge systems for agriculture that are driven by public interest and public funds.

I write this knowing well that we in India are succumbing to the definition of food that sells us the idea of modern lifestyle, which must begin by discarding the culture of locally grown, home-cooked and seasonal food. This is not accidental; this is a deliberate strategy to seduce us to be part of the food business that compromises our health for profit.