When the hills turn blue

... it is the elusive kurinji flowering in the Western Ghats, blossoming faithfully every 12 years 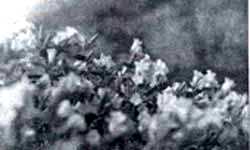 LAST year, when we were in Talaicauvery, the fountainhead of the Cauvery, we were regaled with the thrilling and rare spectacle of the slopes splendidly clothed in kurinjis in bloom. There are references to kurinji - the blue flower that gives the Nilgiris (blue mountains) its name and blossoms cyclically every 10 to 12 years - in the Sangarn period of Tamil literature, which date back to the 2nd century AD.

The Sangam poems divide the environment into 5 tinais (ecosystems). The mountainous tinai is called kurinji, fabled flowers of the Western Ghats. Murugan, the god of Kurinj land, is supposed to have put a garland of kurinji blossoms around the neck of Valli, a tribal belle of the hills, whom he married. The Muduva tribals, the original inhabitants of the Palni hills, reckon their age with the blossoming of the kurinji.

The kurinji is a gregarious shrub in the family of Acanthaceae of the subspecies Strobilanthes. It grows at an altitude of 1,600 metre in the Western Ghats and the Sayadhri ranges. Kurinji flowers only once in its life. While in bloom, it turns vast stretches of the hillsides blue, offering one of the wonderful spectacles of nature. Most of them bear similar flowers although they differ in size. The medicinal value of the kurinji has been recognised in Ayurveda. The periodicity of flowering also varies widely. What we see in the Nilgiris is Strobilanthos nilagirianthes while the one that is found around Munnar in the Palni hills is Phlebophyllum kunthianum, which blooms profusely once every 12 years.

Interestingly, a systematic record of its blossoming since 1858 has been compiled, the credit for which goes to one Cookburn of Kotagiri, who built up a record of 100 years of kurinji blossoming. His grandfather, one of the earliest white settlers in the Nilgiris, was so struck by the phenomenon that he left records about it.

It was Robert Wight and Colonel Beddoms who initially studied this plant and catalogued over 20 species. Gamble his Flora of Madras Presidency identified about 46 species. Fyson in his Flora of the Nilgiris and Pulney Hill Tops illustraed and described some more species of Strobilanthes. Anglads Institute at Kodaikanal, run by Catholic monks, kept a faithful record of the blossoming in the PaIni hills. the '30s, they made a survey and identified many varieties Strobilanthes.
But today, the plant faces the dreadful prospect of getting wiped off the face of the mountains. As forests are cleared for tea plantations, roads are laid and exotic plants Iike wattle and eucalyptus are planted, kurinji surrenders :A traditional ground. So far, it has been spared only because it has been left to grow on mountains that are too steror unsuitable for tea plantations.

The hills around Mattupam Gundu Malai and Kundala, around Munnar, are kurinji area-the Nilgiris, these shrulis can be setigng the grasslands near the Muku and Manohoor hills. But here, tracts of kurinji land have been over by leather and other industries and wattle and eucalyptus have planted all over the slopes.

In recent years, there has campaign to save the kurinji habitat. The Save Kurinji Campaign Council of Thiruvananthapuram, the High Range Wildlife Association of Munnar, the PalniHills Conservation Council of Kodaikanal and the State Bank of Travancore Green Circle have been trying to move public opinion in favour of this plant, They conduct padayatras from Kodaikanal to Munnar, the surviving kurinji habitat.
The kurinji has now become the flagship for a unique ecosystem. These organisations have been asking for the protection of the prime kurinji habitat between Kodaikanal and Munnar and to declare it the Kutinjimala Wildlife Sanctuary. The 95 sq-km area, source for rivers like the Vaigai and the Amaravati, lies along the 1,800 metre contour line. The major portion of this area falls in Tamil Nadu and the rest in the Idukki district of Kerala. There is only one village in this area, at Maltavarangudi. A solitary road from Kodaikanal to Murinar cuts through this grassland.

If we can save the kurinji, we will be saving a distinctive habitat that is home to some very precious wildlife like the Nilgiri tahr and the Nilgiri pine martin. Many plants that are listed in the Red Data Book of endangered flora are stiff found in the nooks and crannies of this area.

There is another reason why this grassland- rainforest ecosystem should be saved. It is here that many rivers of South India originate and it is the natural water tank of the plains below. The preservation of the kurinji ecosystem will take care of the entire environment.