When the Satpura blushes

The flame of the forest that paints the Satpura range red in March is part of art, culture and literature. It can also be a source of livelihood for local people

The flame of the forest that paints the Satpura range red in March is part of art, culture and literature. It can also be a source of livelihood for local people 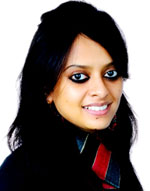 Traversing across the rich Satpura forest range of Madhya Pradesh one witnesses a vast expanse of forest cover—dense with teak, sal (Shorea Robusta) and other species of trees. The spectacular “flame of the forest” (Butea monosperma) efflorescence, beginning early March, paints the entire forest with a riot of colours. A floral kaleidoscope of red, vermillion and bright orange emerges from within the dry deciduous cover when leaves begin to fall and the trees bud with parrot beak-shaped flowers, famously known as palash, tesu or dhak.

It is interesting to note how different flora converge, emphasising nature’s own equilibrium, putting to rest the barren quiescence of the forest for a bit. A symbiotic relationship demonstrated through nature’s own balancing act, the yin and yang—the palash flowers interlace impeccably with gothic leafless skeletons of trees in central India, thus heralding the floral spring. Adding an afterglow to a deserted stretch, these blossoms mark the heyday period of the Satpuras. This is one of the most powerful forms of the flower language, interpreted through palash inflorescence, which being emblematic of Holi—the festival of colours—is associated with prosperity, happiness and festivity.

What's in the name?

This tree is christened flame of the forest. The origin of such metaphorical nomenclature has been derived from its relevance underscored in nature and literature. The tree blossoms at the time when forest fires are common owing to its spread in the deciduous topography—an ecosystem, where these trees flourish. On the other hand, the red dazzlers have managed to inspire poets and writers across generations. 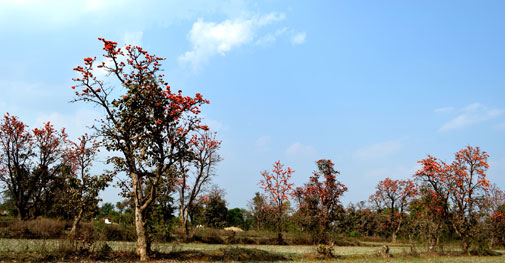 The famous Ore Grihobashi by Rabindranath Tagore and Rudyard Kipling’s stories from the jungle, mention palash in different narratives. While Tagore’s poem focuses on the flower’s connotation with celebration of life through his famous Ranga hashi rashi rashi ashokey palashey, Kipling’s Plain Tales from the Hills construes these dhak florets with multiple phenomena, one among those being “danger of the red flames”, associated with the arrival of summer and the consequent propensity of natural wildlife turbulence in the jungle. Similarly, Jungle Book’s little Mogli is often spotted stating, “laal phool jab khilenge, tab humein shikaar milega” (when the red flowers bloom, we will get our prey). It is interesting to note here that Kipling’s Jungle Book stories have been set in the majestic jungles of Pench National Park in Madhya Pradesh—a part of the Satpura spread, famous for palash, teak and the “ghost” kullu (Sterculia urens) trees.

Palash tree has an economic significance as it is used to host the lac insect and produce shellac, which is an important source of income for farmers and women Self Help Groups (SHGs). Lac is used to make jewellery, miniature crafts and contributes immensely to pharmaceutical industries. While many farmers sell raw lac at an average rate of Rs 300- 450 per kg to traders (prices vary from season to season) many others are engaged in its processing. 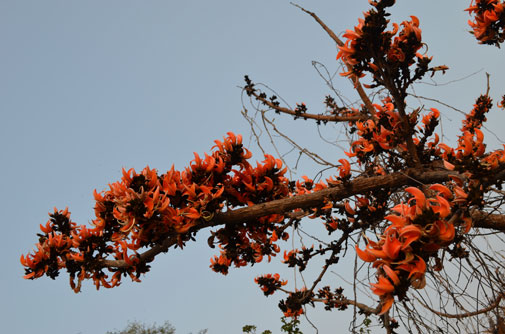 Palash is also the state flower of Jharkhand and Uttar Pradesh. Historically, these flowers were used by women as traditional ornaments on festivals. Enhancing its ornamental appeal and usage to urban tastes, palash flowers could also be used to make colourful home décor products such as pot pourries. Various district and forest government departments in this terrain could organise SHG based activities in herbal colour processing and flower art, thereby generating livelihood for local people while also celebrating the ephemeral, gorgeous red flames of the jungle !

Swasti Pachauri is a social sector consultant currently working as a Prime Minister's Rural Development Fellow in Seoni district of Madhya Pradesh, India. Views expressed in the article are personal.