When will India wake up to freedom—from air pollution? 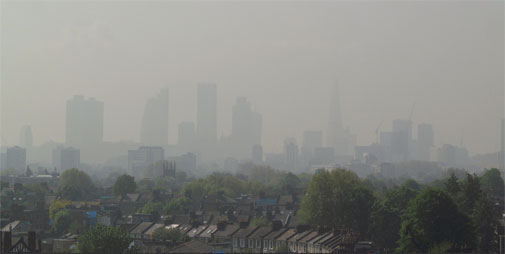 In January this year, London Mayor Boris Johnson launched an air quality campaign—Breathe Better Together. It was started to raise awareness about air quality through posters and advertisements on radio while promoting walking and cycling.

On March 17, Johnson issued the first high air pollution warning, requesting all vulnerable children and adult groups with lung and heart problems to avoid outdoor activities. Some of the worst levels of pollution were measured in the Midlands, north-west England and northern Ireland. The PM2.5 (particulate matter the size of 2.5 microns or less) levels were reported to be as high as 66 microgram/cubic metre (µg/cum), almost three times the prescribed EU standard of 25 µg/cum. He also gave some tips to reduce pollution, which included car-pooling and switching off engines while not in use.

UK’s Department for Environment Food and Rural Affairs (DEFRA) said change in direction of winds carrying dirty air from urbanised and motorised regions in Europe to London’s home-grown smog and still weather led to the high pollution levels. The swathe of air entering the UK is mostly from northern France, said media reports.Scotland also received an air quality warning from the international network of environmental organisations, Friends of the Earth (FOE), regarding particulate matter reaching an all time high since August 2012, with Aberdeen being the worst affected. According to FOE, the local vehicular pollution (of the UK) was a big contributor to such high smog levels. Government officials accepted the need to do more despite having made substantial progress in curbing air pollution. The Met department is also closely working with Public Health England, the executive agency of the Department of Health in the United Kingdom, to provide accurate information on air pollution and relevant advice to public.

What is interesting to note is that what is alarming pollution level for London, which prompted the Mayor to caution the city residents, is treated as the safe limit for PM2.5 limit in India—60 µg/cum. This not only highlights the weaker standards in India as compared to European Union (which follows WHO norm) but also calls for strict action from the Indian government in cases of violation of air pollution standards.

Environmentalists in Scotland have demanded free bus service and public transport to remove private vehicles from the roads, following the example set by Paris.

In March, 2014, Paris gained a lot of attention when certain regions experienced particulate matter pollution as high as 180 µg/cum while the maximum permissible limit is 80µg/cum. This compelled the authorities in Paris to cut down private vehicles on the road. It also made public transport free over the weekend to get its public to use buses and trains and share bikes. The city also adopted alternate vehicles system—allowing cars with either odd or even number plates to ply on alternate days. The spokesperson of prime minister’s office of France had gone ahead to say that officials were aware of the inconveniences this could cause the public but it was an urgent requirement. Paris also does not allow diesel cars on smoggy days.

Even Beijing has woken up
In the past, Beijing was tagged the most polluted city in the world. However, the city’s authorities have started implementing a strict air quality index and release regular air quality warnings with its implications on health. Not only have they acknowledged their problem of air pollution but have also made it an important topic of political discussion. China has unveiled strict action plans to curb its air pollution. Beijing-Tianjin-Hebei Province, the Yangtze River Delta and the Pearl River Delta were were asked to reduce their PM 2.5 levels between 2013 and 2017 by 25 per cent, 20 per cent and 15 per cent respectively.

Beijing has implemented an emergency response plan wherein authorities inform the public about bad air quality days. They suggest measures on how public can protect themselves, ask schools to shut down and 80 per cent of government-owned cars are to be taken off the road on red alert days. On orange alert days when Beijing is slightly polluted (AQI 101-150, class 3), they shut down polluting factories. Even barbecues and fireworks are banned on heavy pollution days.

Air pollution is the fifth largest killer in India. When I returned to India in 2013 from Scotland, I started experiencing breathing troubles and acute sinusitis. My doctor could only put me on steroidal sprays but was unable to identify the exact cause. With time when I started working on the issue of air pollution and health in Delhi, I realised it was Delhi’s rising air pollution that was affecting my lungs. However, not many people in India research on air pollution to find out the severity of these levels. I was lucky.

I was also part of the Centre for Science and Environment team that monitored some eminent and common citizens of Delhi to test their real time exposure to fine particulate matter and the results were stunning While the peaks of their real time exposure to PM2.5 crossed 1,000 µg/cum, the 24-hourly averages were 4-5 times higher than India’s safe standards (60µg/cum) for ambient air quality. The worst-affected people were those using public transport, including buses and autos. Why is it that London issues air quality alerts on reaching  66 µg/cum when Delhi does not have any warning on crossing 500 µg/cum? The most impacted are children and the elderly. Recent studies have also reported that air pollution is reducing India’s life expectancy by 3.2 years. How many lives would it take for our government to wake up? On days when China would shut down its schools and factories and Paris would remove cars from the road, India sleeps unaware.

Indian government needs to acknowledge this problem wholeheartedly and implement our proposed national air quality index to inform people on the impacts of air pollution on particularly bad days and also take stringent measures to reduce it. It also needs to expand the real time air quality monitoring throughout India, starting with the worst polluted cities. We demand clean air. Let us not make respiratory diseases a part of our culture.