When wind and water run riot

The killer cyclone that hit Andhra Pradesh in 1977 will long be remembered as India's worst natural calamity of this century. But that we still haven't learnt the lessons of the tragedy is evidenced by the widespread suffering that resulted from last month's cyclone. 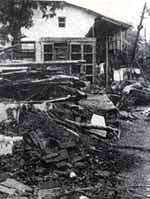 What can be done
When
Elements that sustain life -- air and water
Turn to destroy...?
-- Dasarathi, the acknowledged poet laureate of Andhra Pradesh.

DASARATHI'S poem was inspired by the fury of the killer cyclone that crossed the Andhra coast at Chirala during the evening of November 19, 1977, and took a toll of more than 50,000 lives. Most of the destruction was caused, not by the 240-kmph winds, but by the tidal wave -- over 6 metres high, 80 km broad and 24 km deep -- that rolled into the very interiors of coastal Andhra Pradesh, especially the low-lying districts of Krishna, Guntur, Prakasam and Nellore.

Coastal Andhra Pradesh experiences at least one or two cyclonic storms every year, usually in the months of May, October or November. However, despite the frequency of occurrence of cyclones, the government has mostly failed abysmally to handle its social and economic repercussions. The 1977 cyclone saw, for the first time, the involvement of several hundred voluntary organisations in diverse relief works ranging from corpse disposal to food distribution and house-building.

The recommendations of the Cyclone Distress Mitigation Committee (CDMC), set up by the Union government after the cyclone in Andhra in 1969, has been the only frame of reference for government action. The moving spirit behind the CDMC is a good and old friend of mine, P Koteswaram, then director general of the Indian Meteorological Department. Today, he leads a quiet, retired life in Visakhapatnam and when I met him recently, he recalled some of the important recommendations made by the CDMC.

The CDMC had asked for high-power, storm-detection radars to be installed at Calcutta, Madras, Visakhapatnam. In addition, the committee recommended a network of 50 wind observatories be set up along the Andhra coast. Upgrading of All India Radio's Hyderabad, Visakhapatnam and Vijayawada stations for the rapid dissemination of weather information was urged. Storm shelters, dykes and bunds were to be built. The CDMC also asked that the coastal areas be suitably afforested and wind breakers provided along the coast. As evacuation operations were often hampered by accessibility, the committee recommended that roads be constructed in all vulnerable areas.

Acknowledging the fact that advance warnings are ineffective without the people's cooperation, the CDMC also suggested an elaborate community preparedness programme. A model cyclone plan was drawn up for Andhra Pradesh, which outlined the steps to be taken by various government agencies before, during and after the cyclone. According to the plan, the Centre was responsible for adequate financial assistance, installation of an early warning system and rapid transmission of information. The state government, on the other hand, was expected to look after the execution of operations on the ground. Each district was to have a high-powered CDMC unit, headed by the district collector.

In 1977, information made available to district officials up to the evening of November 18 from AIR, the meteorological department and the state government did not predict a storm wave. It was only around midnight on November 18 that the following message was received from the Visakhapatnam meteorological department: "Severe cyclonic storm with a core of hurricane wind lies in Bay of Bengal centred at 2030 hrs about 190 km East-North-East. Likely continue to move in NW Direction and CROSS coast between Madras and Masulipatnam tomorrow morning the 19th... Under its influence... Tidal waves height reaching... kindly alert your organisation to take all precautionary measures as per recommendations of CDMC...". There was no time to evacuate people to safer areas, nor any cause to suspect that the Krishna district would be the worst hit.

Fifteen years later, modern science has found many more ways of predicting and tracking down cyclones. But the situation on the ground remains just as bleak. Nearly 30 per cent of coastal Andhra villages do not have cyclone shelters. Those in existence are so poorly maintained, they are on the verge of collapse. About 40 per cent of the coastal villages do not have all weather roads; 20 per cent do not have any roads at all. Efforts to plant casuarina trees along the coast have not taken off and there has been hardly any headway in building dykes, bunds and channels along the coast. On paper, every district has a CDMC unit. But in an emergency, the district collector needs collaborative assistance from various government departments, which is not always forthcoming.

Now, however, with large areas of Kerala and Tamil Nadu once again hit by a cyclone, it's time the Union and state governments reviewed their emergency plans and got their act together to prevent the utter ruin and destruction that has so far accompanied every cyclone on the Andhra coast.

P Jacob Rao is chief marine surveyor and consultant to the Visakhapatnam-based Indian Maritime Survey Consultation and Investigation Company. He is also coordinator of the Coastal Poor Development Action Network India and president of the Voluntary Agency for Social Action.