Where is the sceptical indian scientist? 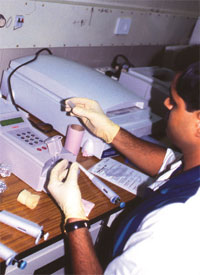 What characterises the Indian scientist? It is a question that scientists might find embarrassing to answer with honesty. A widely prevalent view is that our scientists are a true reflection of Indian society: feudal, hierarchical and reluctant to buck the system. It’s true that a society’s values and attitudes shape the way its citizens think and behave. Does it also determine the scientific culture and thus the outcome of our scientific research? Unhappily, the answer is yes.

Go to any of the public research institutes and you will find these teeming with scientist babus who are as bureaucratic in their attitudes as any long in the tooth IAS official. Given their value system the scientists look up to their bosses for guidance and direction, daring to do little on their own. You could argue that this is necessary in institutions that are putatively working towards national objectives. But does that imply all independent thinking has to be jettisoned? After all, good science is about not taking things for granted. So where is that much-needed attribute of scepticism which makes for a good scientist?

Shackled by custom and a passive mindset, Indian science has turned out precious little that redounds to its credit. The me-too research that is underway now in the public sector is reflective of the absence of original ideas. As Nobel laureate Venkatraman Ramakrishnan points out, it is not possible to have good science without complete freedom of thought. The scientist who won the 2009 Nobel Prize in Chemistry for his work on ribosomes had other nuggets of wisdom to offer his fraternity when he came to Chennai in December last year and deflated many of our conceits.

One point he made in particular calls for rumination. It is about the self-correcting nature of science. As new evidence emerges, good scientists refine their hypotheses and theories. “It is this built-in self-correction that distinguishes science from other systems of belief. In science, it is not bad to be wrong, but it is definitely bad to falsify.”

Falsification is certainly a tag that scientists, perhaps more than other professionals, would normally be wary of. While the recent case of the Bikaneri Narma cotton research fraud may be a rare instance, insofar as such matters come into the public domain, there is enough cause for concern. Indian scientists, it appears, are the world’s leading plagiarists. A November 2010 analysis on the website of Nature did a neat job of scalping our reputation by showing the highest rate of retraction of scientific papers due to fraud. The analysis by scientist Bob O’Hara put forward a tricky proposition. “What does this mean for fraud and dishonesty? It may not mean that Indian scientists are more dishonest: it may be that they are no more or less honest than anyone else, just they are caught more often and made to retract.” Now that is a debatable point and would make for a meaty discussion if scientists themselves responded to this provocative theory.

Their hubris, however, makes this an unlikely possibility. Criticism is not taken to kindly by the top scientists who tend to exhibit the George W Bush attitude in double measure: either you are with them or against them. If one is a journalist and has been critical of something, say, for instance, a shoddy scientific report, then one is lumped with the activists, who, of course, are all “anti-science”.

But let’s come back to Ramakrishnan’s point about the self-correcting nature of true science—and not the kind of research that commercial interests pass off as the real McCoy. In the US, numerous reports in recent months, including one by the official Environmental Protection Agency (EPA), have highlighted the increasing resistance that is developing to Monsanto’s GM or Bt corn and herbicide-tolerant seeds and the emergence of super weeds that is forcing desperate farmers to return to lethal pesticides. Naturally, this has sparked renewed fears worldwide about the effectiveness of Bt technology.

Have India’s biotech scientists deigned to confront this issue in a country where GM research is the predominant flavour? Not at all. Instead, there is a tendency to dismiss this as scare-mongering by the anti-GM activists. That scientists can be dismissive of the findings of even EPA, that most lax of GM regulators, is more than troubling. What is unnerving is the imperviousness of our scientists to uncomfortable facts. This is infinitely more dangerous than the activism of Luddites.