Lack of a scientific approach towards wildlife management is telling on Indian flora and fauna. 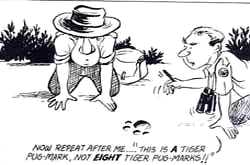 Isn't it time to evaluate our wildlife conservation programme? Notwithstanding the progress made in the past 20 years, tremendous obstacles have been faced by the Indian foresters who protect our wildlife reserves. The establishment of reserves, which increases availability of funding and the need for eco-friendly development to alleviate conflict between humans and wildlife are some instances that require immediate attention.

Despite India's proclaimed commitment to science and development, there has been virtually no scientific application in the management of wildlife resources. Though colossal sums of money are being spent and management decisions are being taken by government appointed committees, nobody appears to have a clue as to how wildlife communities function. Even basic data on wildlife populations are non-existent and ecological knowledge that provides predictive management capabilities is ignored. In fact, how wildlife populations are actually responding to the ministrations of field managers remains a mystery. It seems our wildlife programme is run like a company, which has never drawn up its balance sheet! A few examples will illustrate this.

It is obvious that estimating numbers of animals, or at least obtaining a reliable index of these numbers, is of fundamental importance to the wildlife manager. Consequently, wildlife scientists, ecologists and bio-statisticians have developed a variety of standard, widely applicable methods of animal population estimation over the last several decades in North America, Europe, Africa and Australia. Most of these methods rely on various sampling techniques. Yet, Indian field managers and wildlife policy makers do not appear to be aware of the applicability and utility of any of these techniques. Consequently, repeated field "censuses" attempt the impossible task of counting every animal in a population. These censuses rely on an army of untrained staff devoid of any technical competence. Predictably, these censuses produce results which bear no logical or consistent relationship to the actual size of the animal populations.

The infamous pug-mark method of counting tigers is a classic example of this. In 1986, when I conducted a test on six pug-mark experts, using the same set of tracings obtained from four zoo tigers, their estimate of the tiger numbers ranged from 6 to 26!

A couple of years ago, Project Tiger officials in Bandipur in Madhya Pradesh claimed that populations of tigers' prey had suddenly increased by 50 to 65 per cent in one year, a biological impossibility. The ridiculous explanation they offered was of improved habitat conditions resulting from aerial seeding of bamboo.

While Indian scientists in various scientific disciplines such as physics, astronomy, chemistry, biology, medicine, engineering and even forestry, routinely adopt universally accepted definitions and methods in their respective sciences, our wildlife managers refuse to do so. Can a village blacksmith repair a computer? Can we trust a cook to mix drugs in a pharmacy? Obviously no. We readily appreciate the fact that these are specialised tasks which require special training and skills. Why are we reluctant to recognise this simple truth in the case of wildlife sciences?